John and I continue to prep for a Tobruk scenario later in February.  Part of the goal of this game is to introduce Bolt Action Tank War rules to our gaming group.

I have become fascinated by the Australian defenders of Tobruk, and had to take a crack at making some of these Italian tanks that the Aussies captured and put into service: 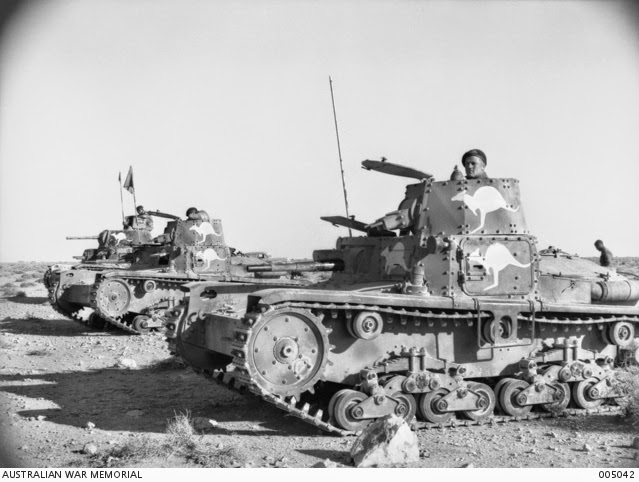 Here are the results.  I elected to only paint kangaroos onto the turrets, as I think that two kangaroos per facing is a little much for the model (though I can understand wanting to go overkill on friendly markings to avoid fratricide!)  I also elected to hand-paint the 'roos rather than use decals to give them a field expedient look. 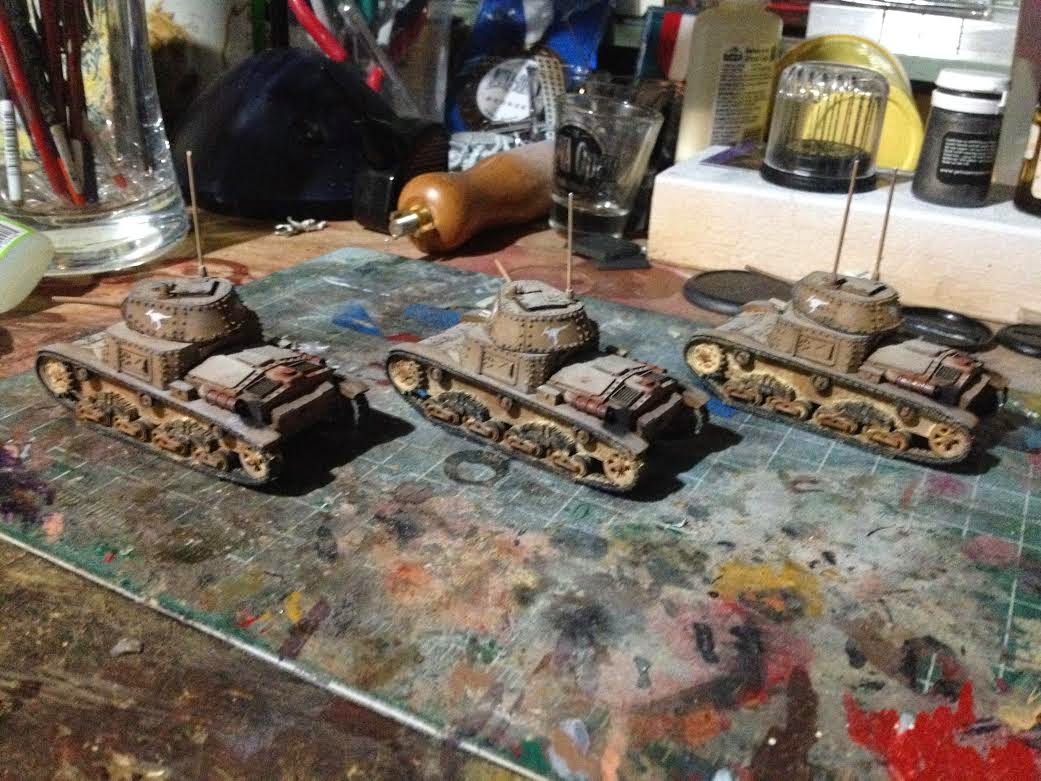 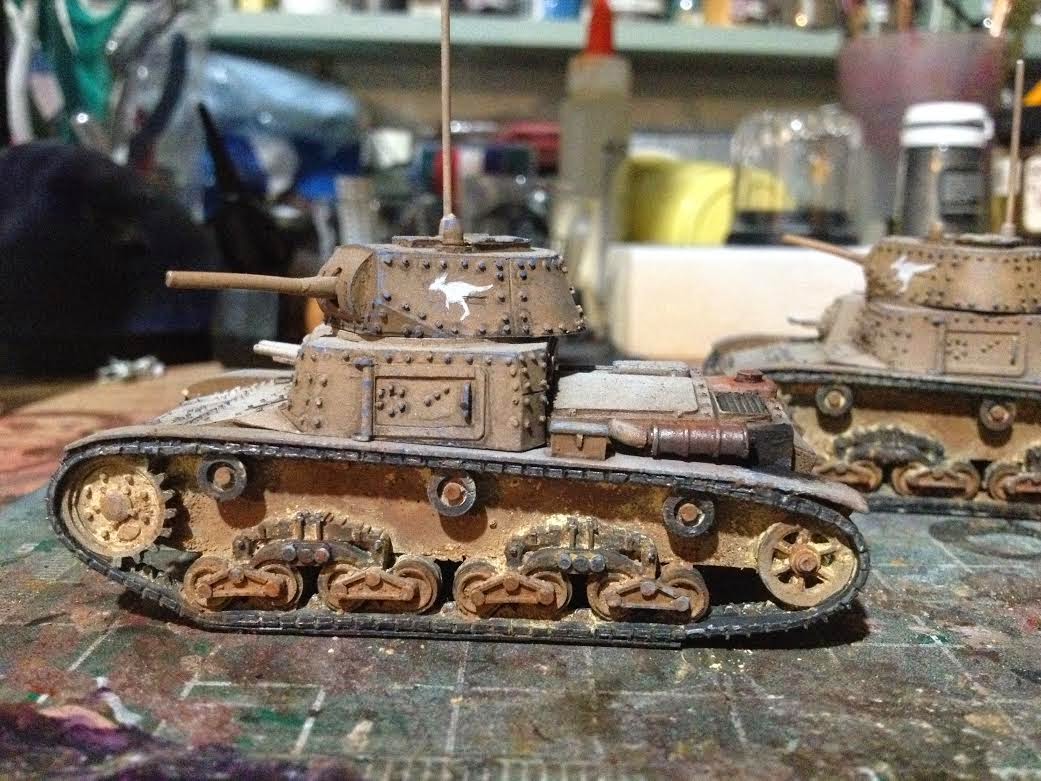 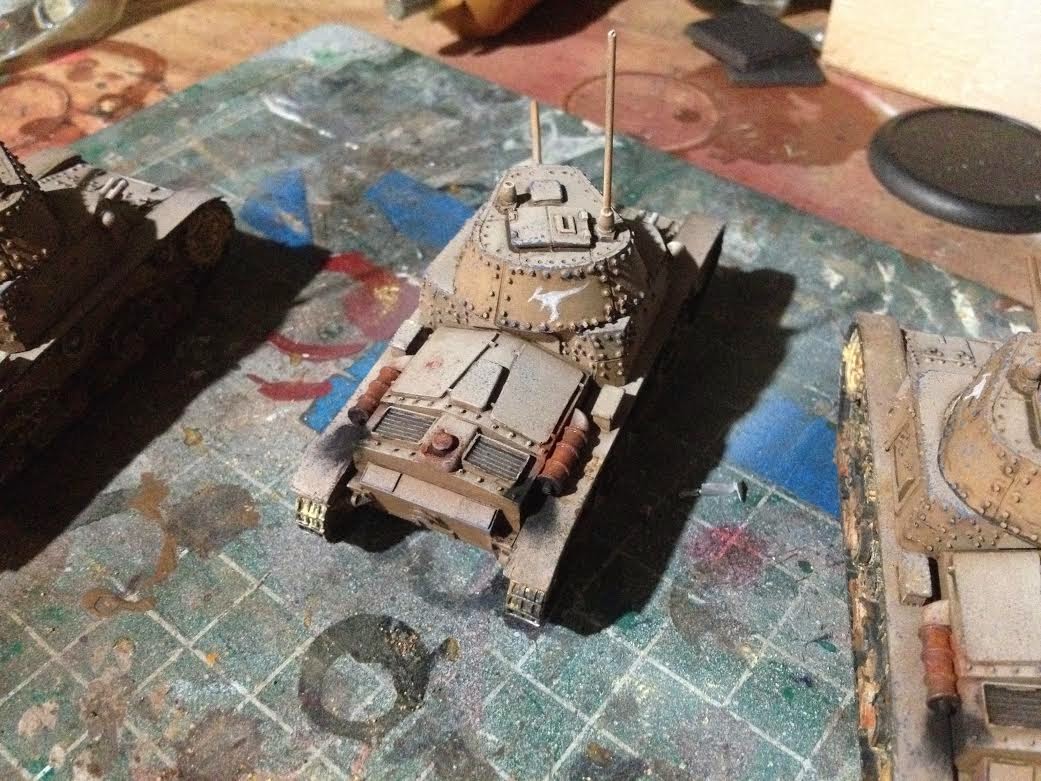 Next up, Australian infantry.
Posted by Unknown at 10:04 AM 4 comments:

Here is the next project in my deep dive into Bolt Action WWII wargaming.  I have assembled the Perry miniatures Desert Rats box set.  I absolutely love these minis.  These models will form an infantry platoon for next month's narrative game which will take place in and around Tobruk in 1941.  John is putting together the opposing DAK force for this scenario, so I need to up my game and paint a force that is at least worthy of sharing a tabletop with his amazing models.

First off, they are a great deal.  For around $36 you get a a core body of command, infantry, and support weapon teams for an entire force organization.  For my money this is the best miniature buy-in for a Wargame on the market right now.  In one box I was able to assemble three infantry squads, 2 Bren teams, a mortar team, and a platoon command.  This left me with three models that worked perfectly for a non-standard "tableau" base that would work for a company command section or forward observer team. 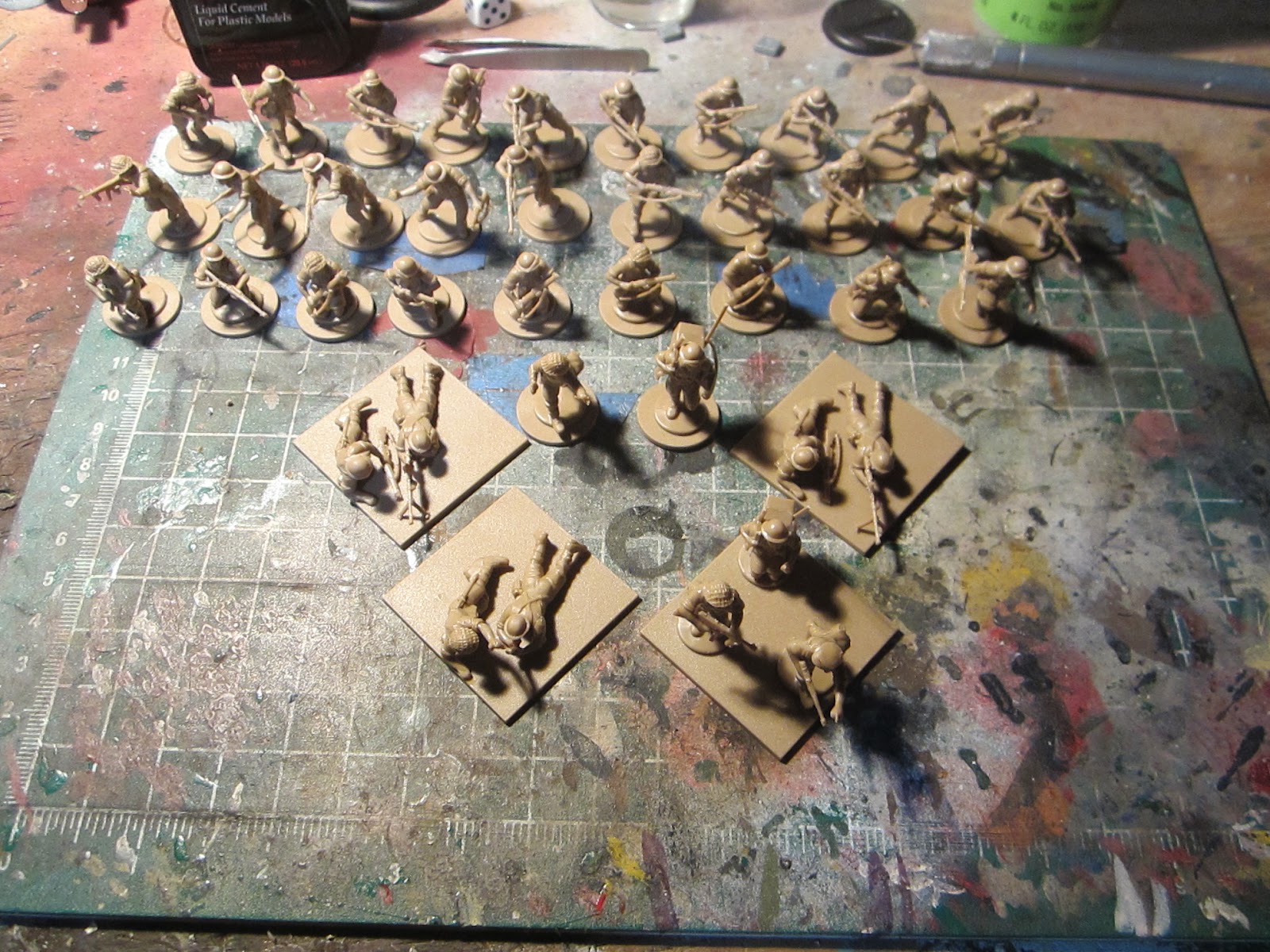 This command/FO unit probably will not work for tournament play, but for the type of narrative wargaming our gaming group has been exploring, it will work very well. 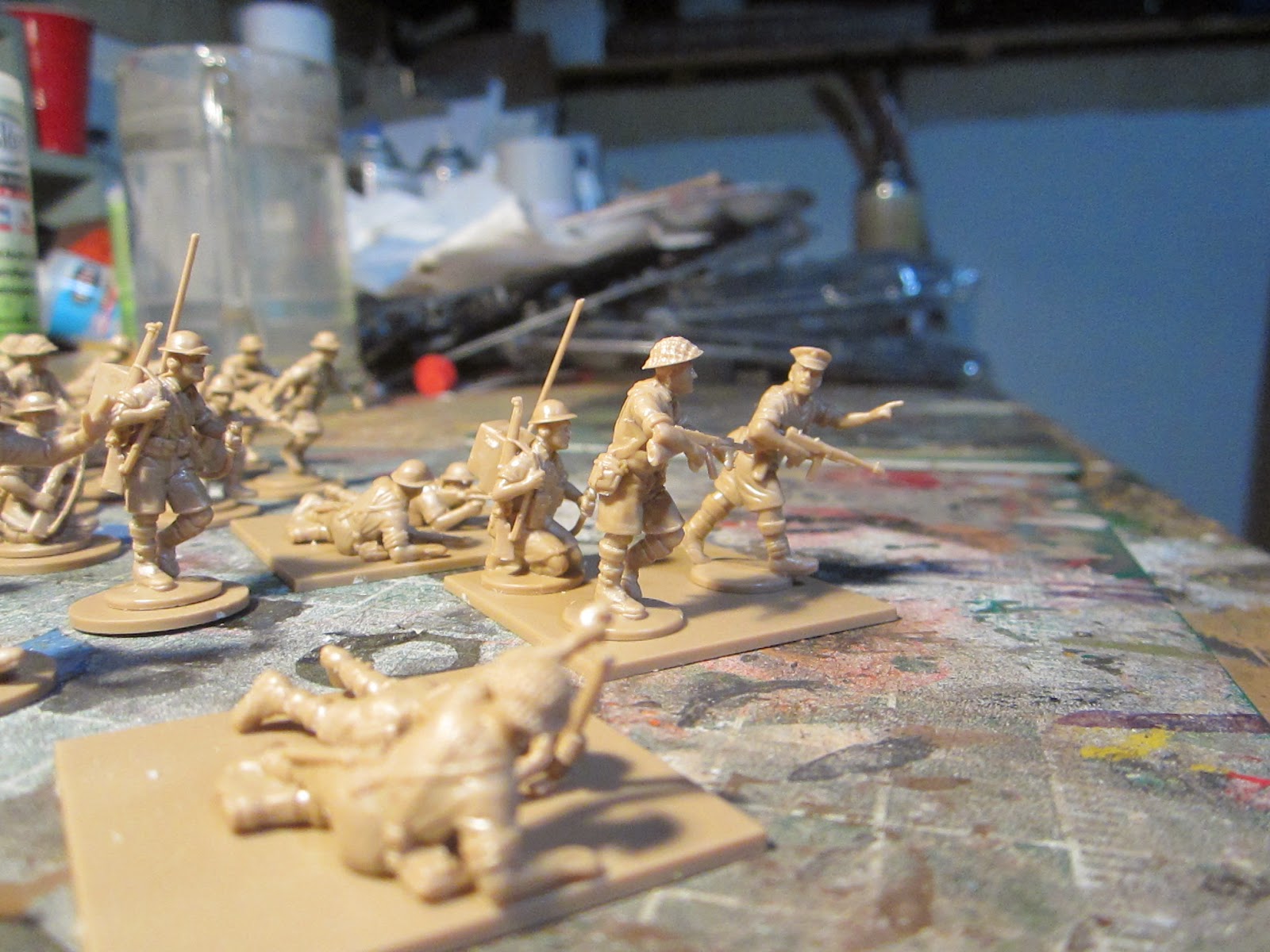 The detail and proportions on these models is fantastic.  I definitely prefer the true 25mm scale to the heroic scale.  Something about the giant heads, hands, and weapons of the heroic scale tends to distract me.  This prone Bren team is one of my favorite models-I really have a thing for prone models firing.  I'm really looking forward to painting them. 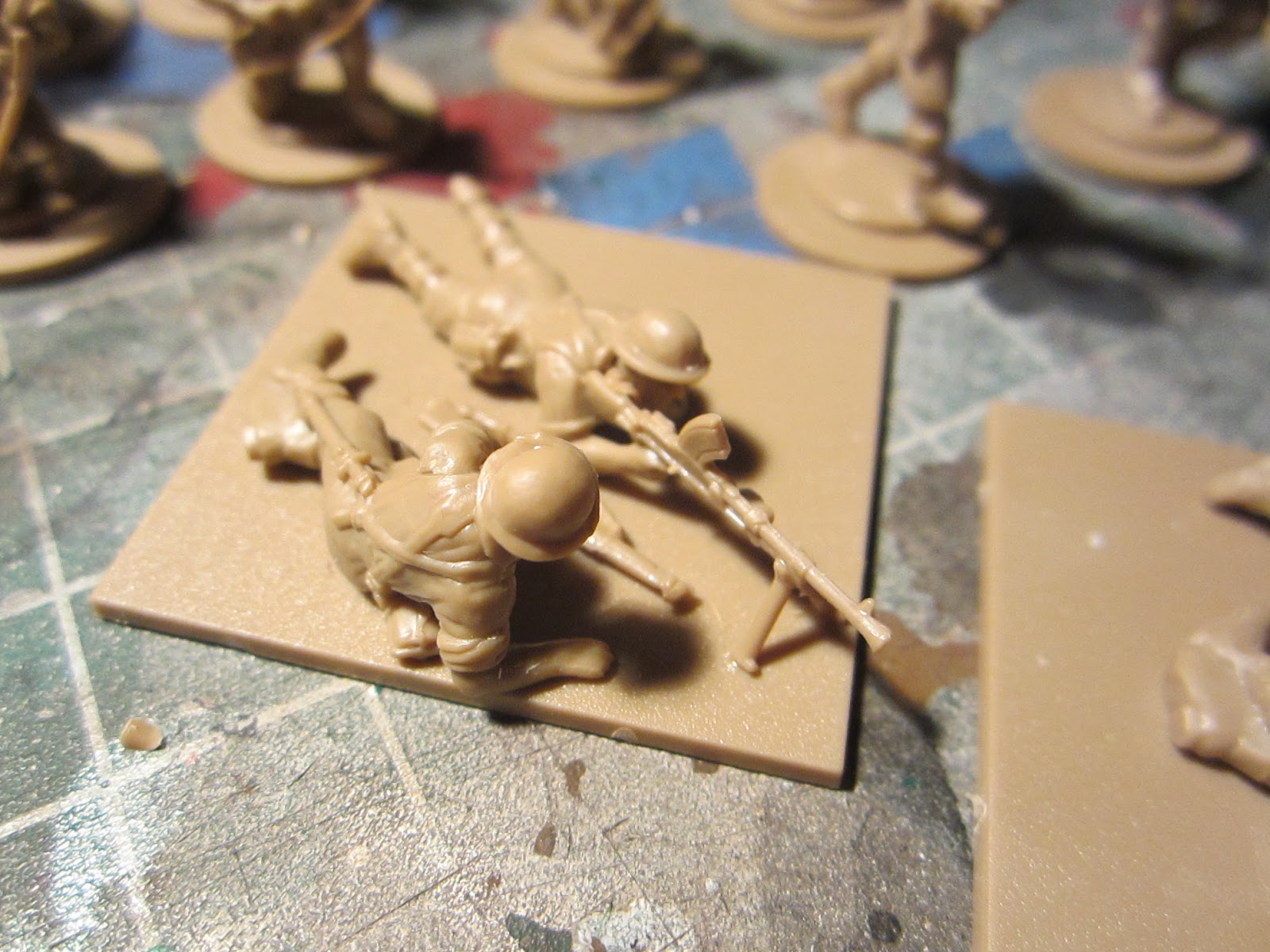 So my plan is to hit the seam between the last set of minis, which I completed in very little time (about 7-10 minutes/model), but almost too much at the cost of quality, and some of my better quality tabletop models like these, which represent about 60 minutes per model.  That said, I still need to paint these Aussies in a hurry and move on to the next project for the February game.
Posted by Unknown at 9:52 AM No comments:

We had a big day this past weekend with John, Mike, Drew, Sean, Owen, Casey, Mike, and Geddy & Bootsie the Schnauzers all coming over for some Bolt Action action.  The centerpiece of the day was the third and final game in the D-Day mini campaign that we started in the Fall.  In this scenario, Drew, John, and Mike played 5th Kompanie, 2nd Battalion, 916th Grenadier Regiment as they counterattacked a platoon from B Company, 1st Battalion, 116th Infantry Regiment (played by Sean and Owen).  On the other table, the Bolt Action family welcomed a new member as Casey introduced Mike to the game with a 1946 alternate history scenario of US Buffalo soldiers going up against the Soviet Red Army.

As with the previous games from the D-Day narrative campaign, the players did not know the specific victory conditions for their teams.  Each side received an order with tactical tasks (platoon level) and the commander's desired endstate, and had to plan and execute their missions using analysis of the situation, tasks, and terrain.  As happened last time, the players all seemed to enjoy this aspect of the scenario, and it produced a very tactical game with almost no artificial douchy gamesmanship (with the possible exception of some cheatin' Germans maneuvering a half track out of turn!)  Cheatin' Steve approves.

The force ratio gave about a 3:2 advantage to the Germans.  The Americans mitigated this disadvantage by defending form the cover of the Chateau de Vaumicel.  At the end of the day, this force ratio seemed to work well for an asymmetric game scenario with one force attacking a defending force in cover.

The Germans fielded three Grenadier Platoons, each with a command section and three squads.  Each squad had an SMG, MG42, and 4 rifles.  The German company command element included a Captain, an Artillery Forward Observer, and a 222 Armored Car with an automatic cannon.  In reserve, the Germans had a squad in a Hanomag half track (to be deployed at the GM's discretion if things started going too pear-shaped)

The US team started with one platoon (command section plus two squads) and a company command element with Commander & 1SG, an 81mm mortar with spotter, a bazooka team, and a sniper team.  In reserve, a platoon from A Company, 5th Rangers waited to enter the table with two squads and a US Army Air Corps forward observer team.  Each us squad had one SMG and one BAR.

So here is how it all went down...

The Americans set up in the Chateau and watched as the German Grenadiers formed up to attack. The Germans moved cautiously onto the table, unsure whether there were any US units waiting in ambush along their axis of advance. 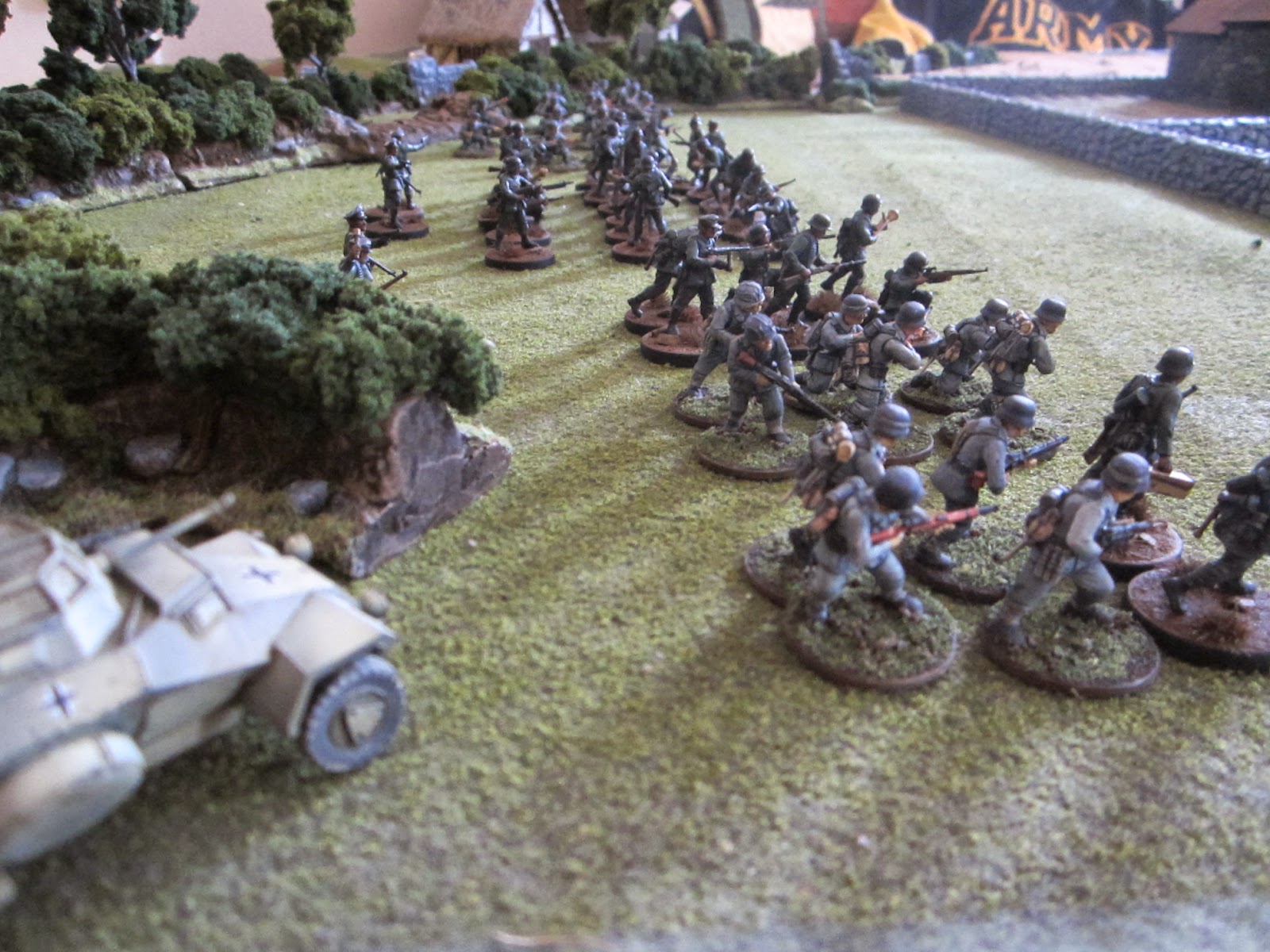 The Germans advance slowly with platoons on-line toward a stone wall with the buildings of the Chateau in the distance. 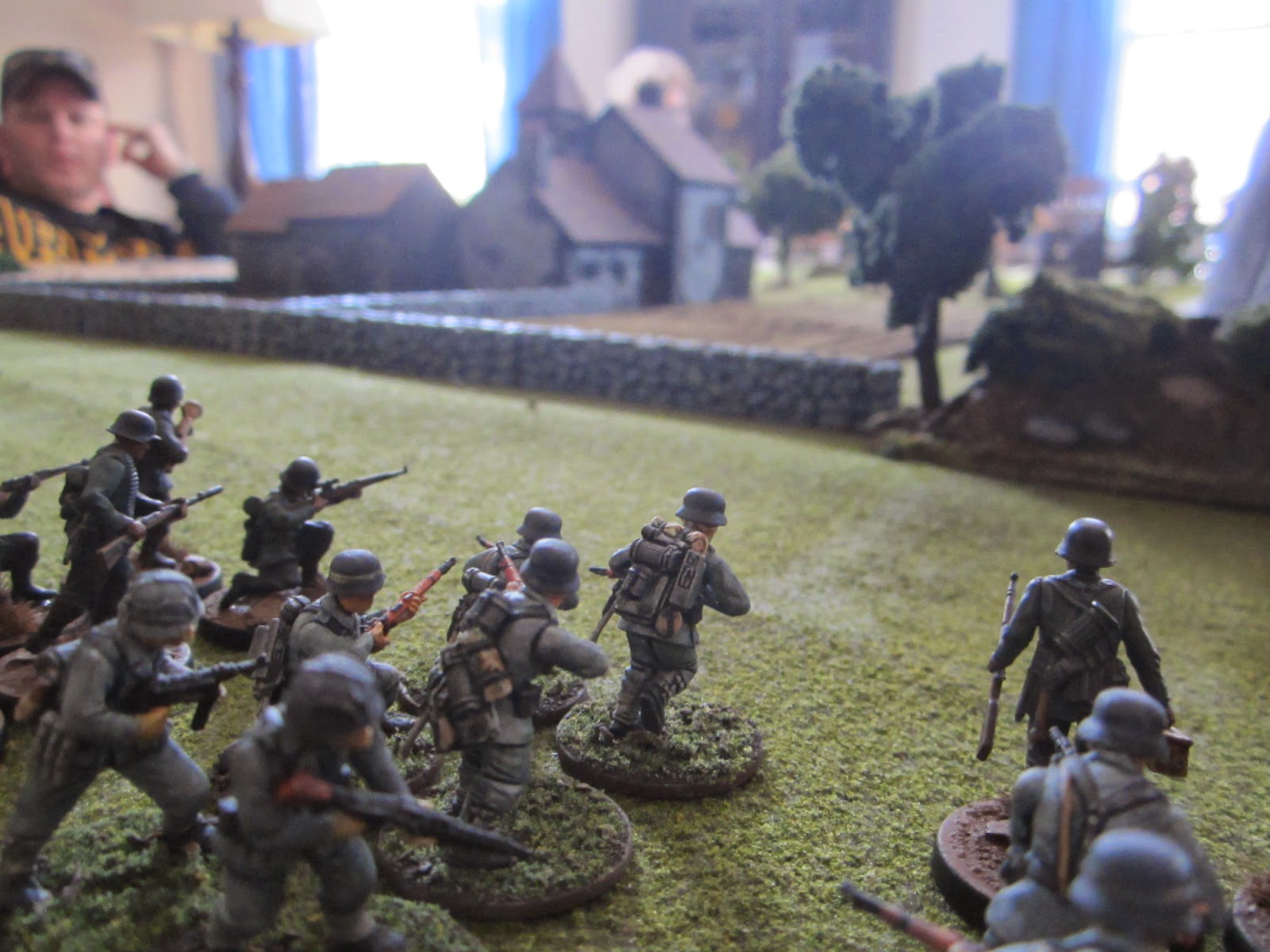 With the entire Grenadier company behind the cover of the stone wall and the Americans starting to fire from the buildings, the German FO called a smoke mission to obscure the breach site (the windows and door along the side of the chateau near the stone wall in the photo below).  Unfortunately, the shot was inaccurate, and landed too far form the buildings to obscure the breach site.  This was going to get bloody at the breach. 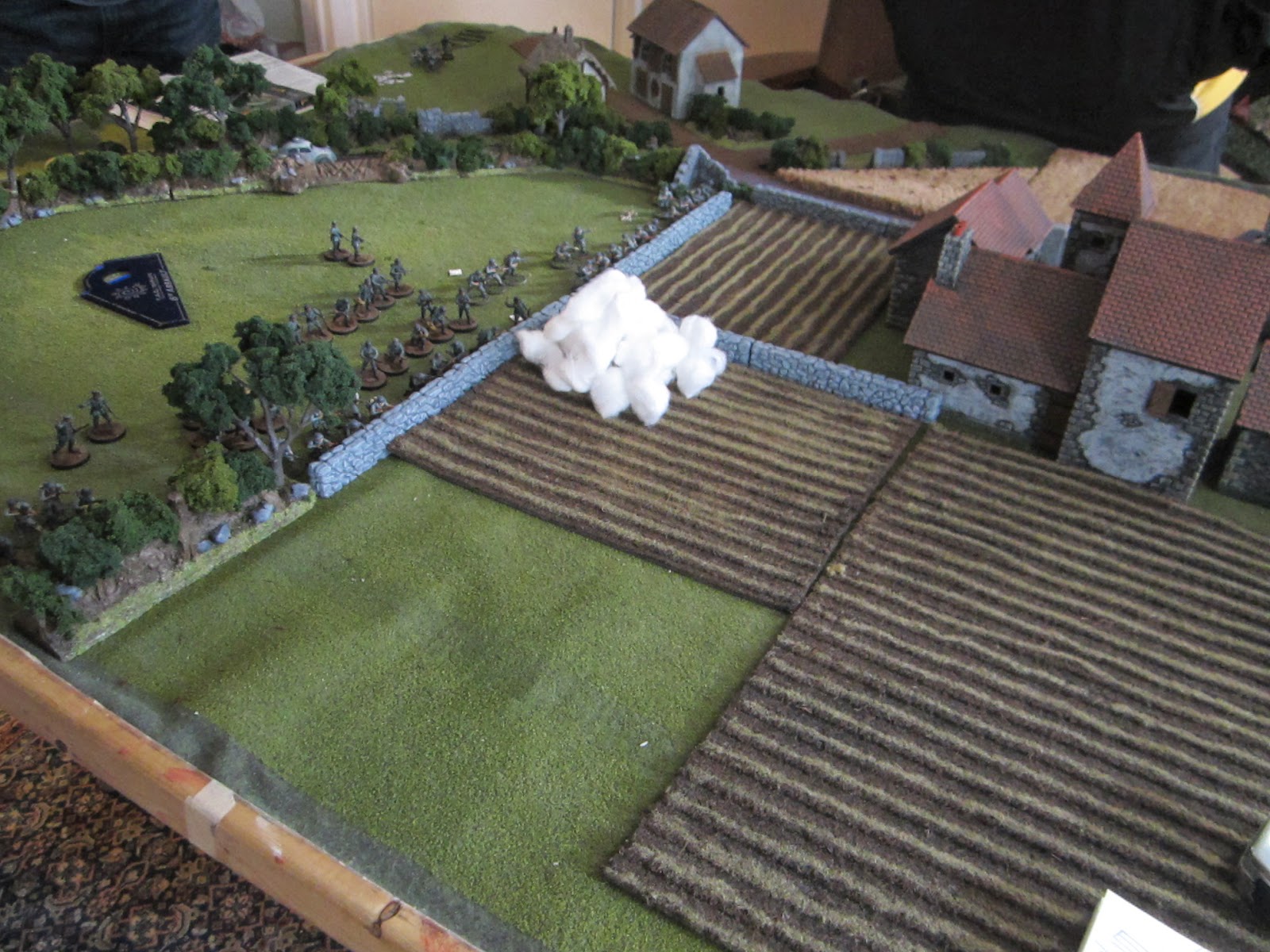 Inside the courtyard of the Chateau, the company commander (foreground) encourages his soldiers in the buildings while the 81mm mortar (background) goes to work raining high-angle hell down on the German attackers.  The mortar spotter shared the Chateau tower with the sniper team. 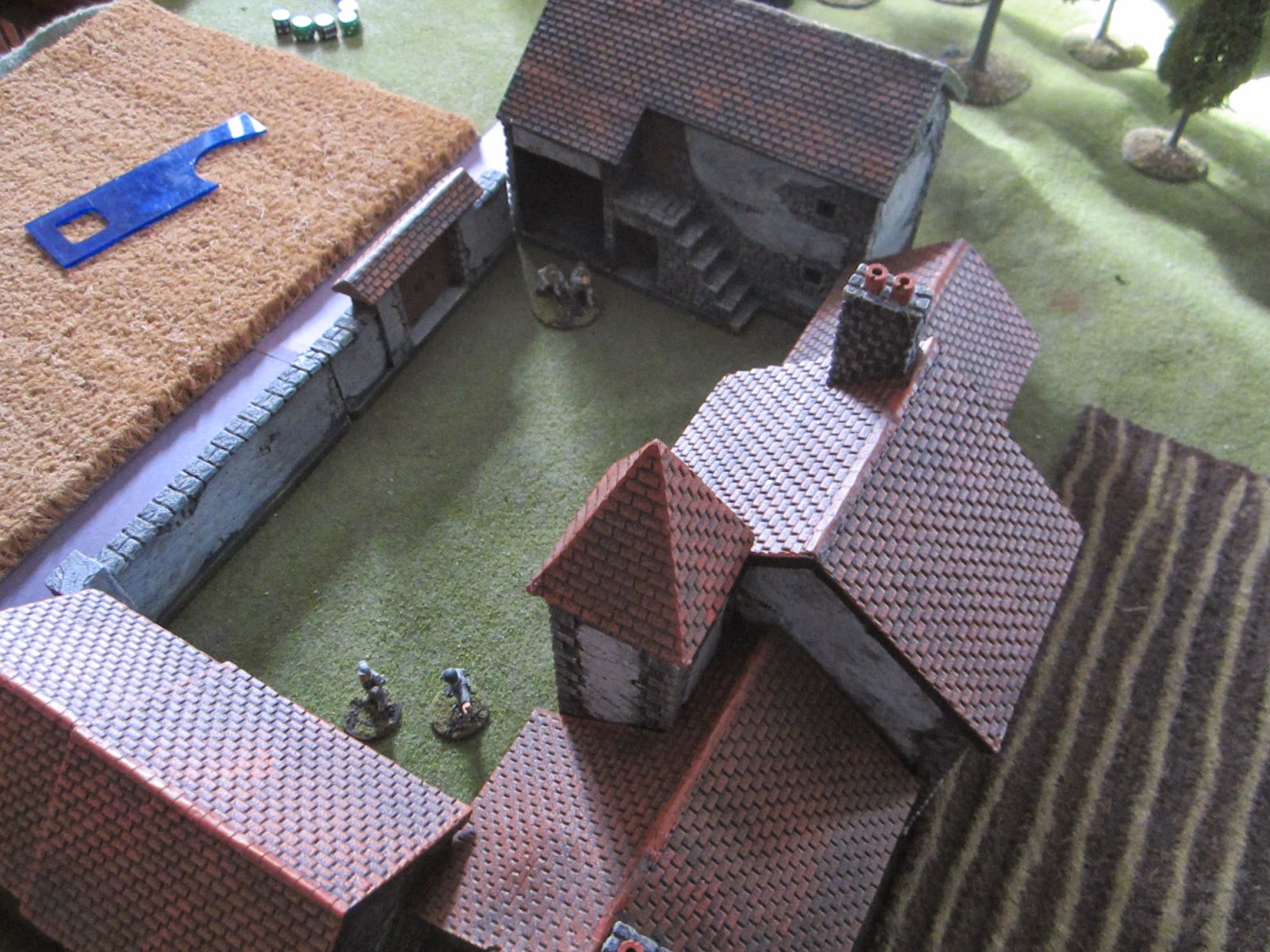 Along the road on the Germans' left flank, the FO's VW provided cover for a squad of Grenadies who were getting chewed-up by fire from the Chateau buildings. 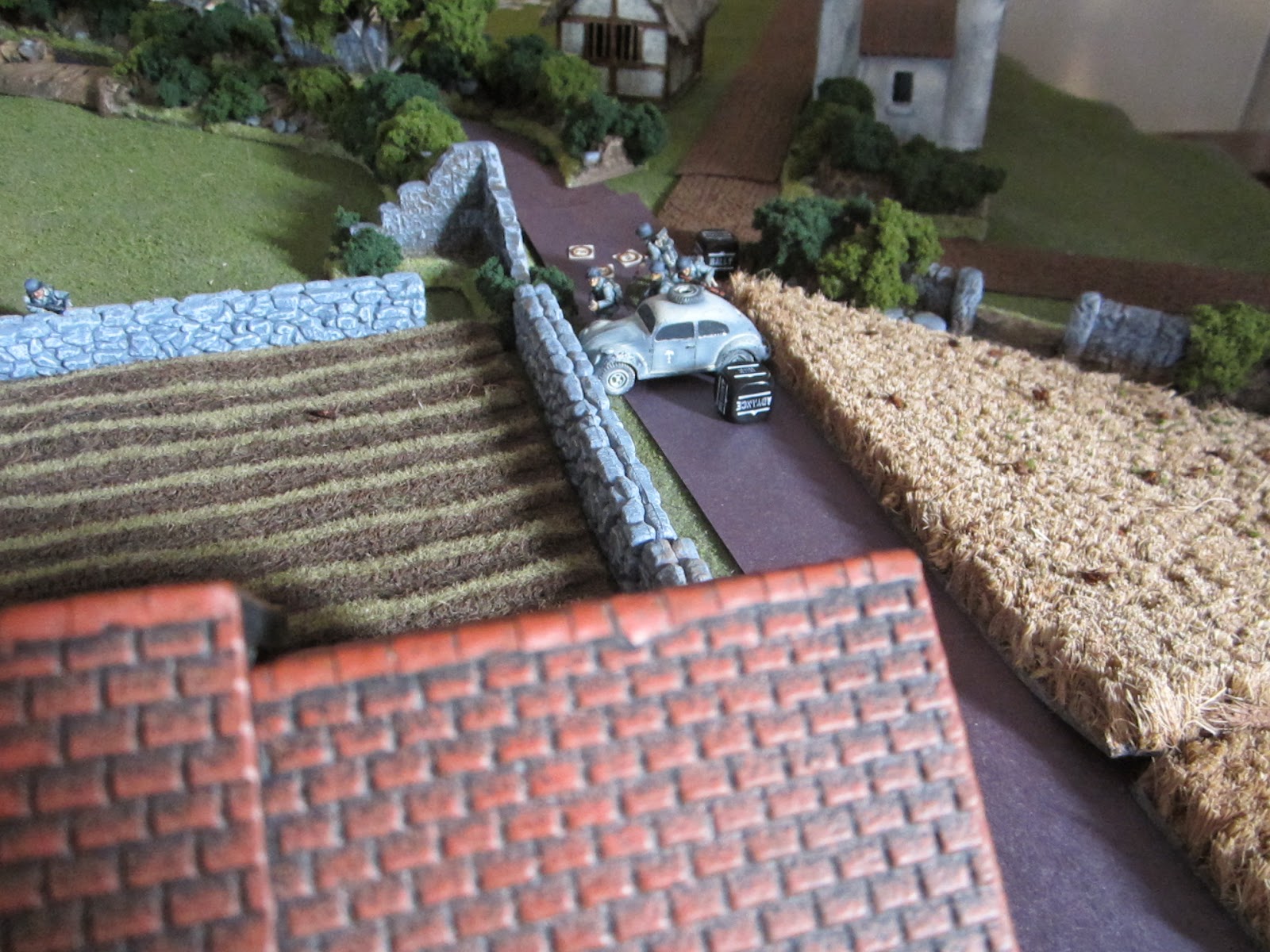 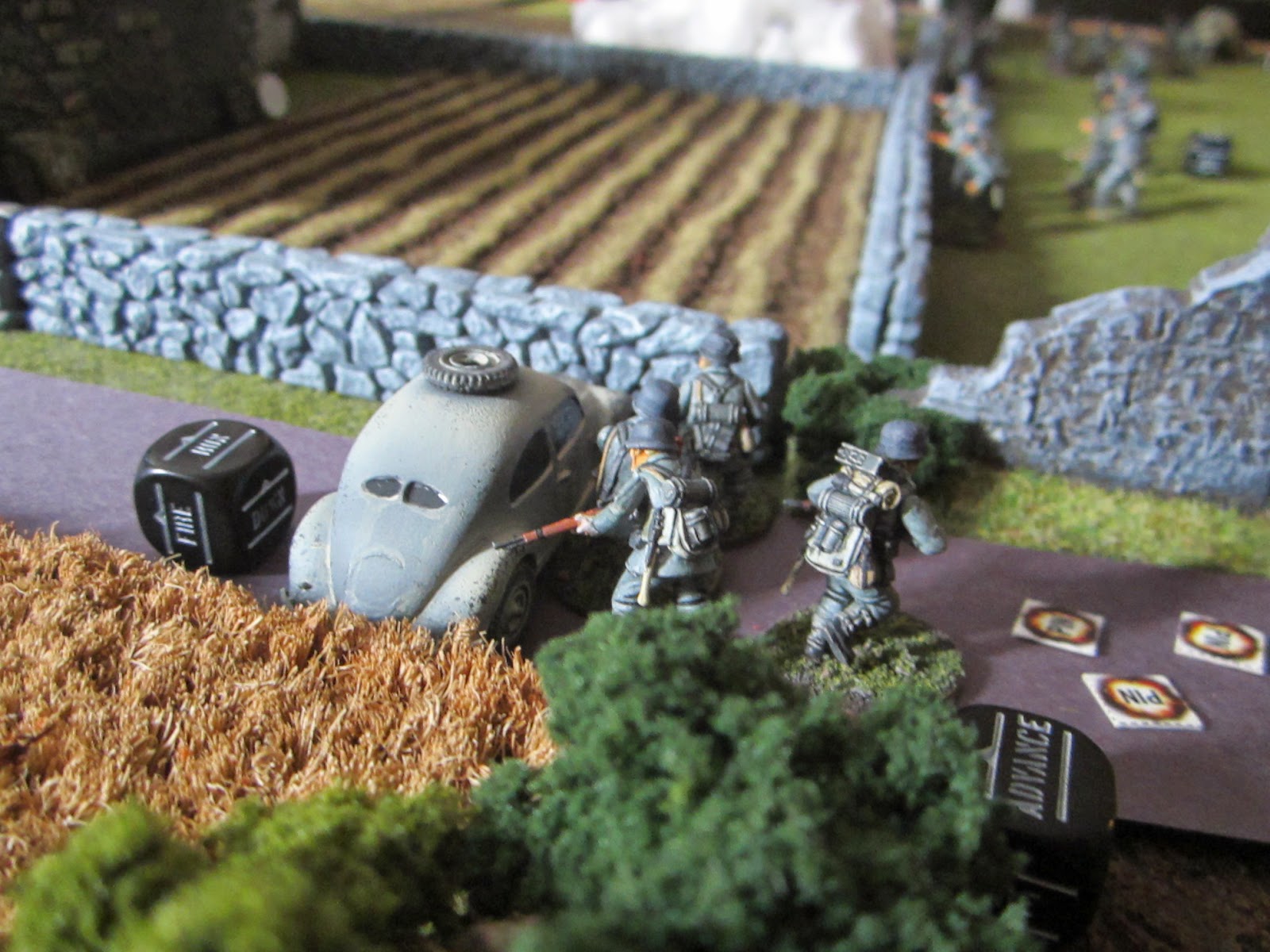 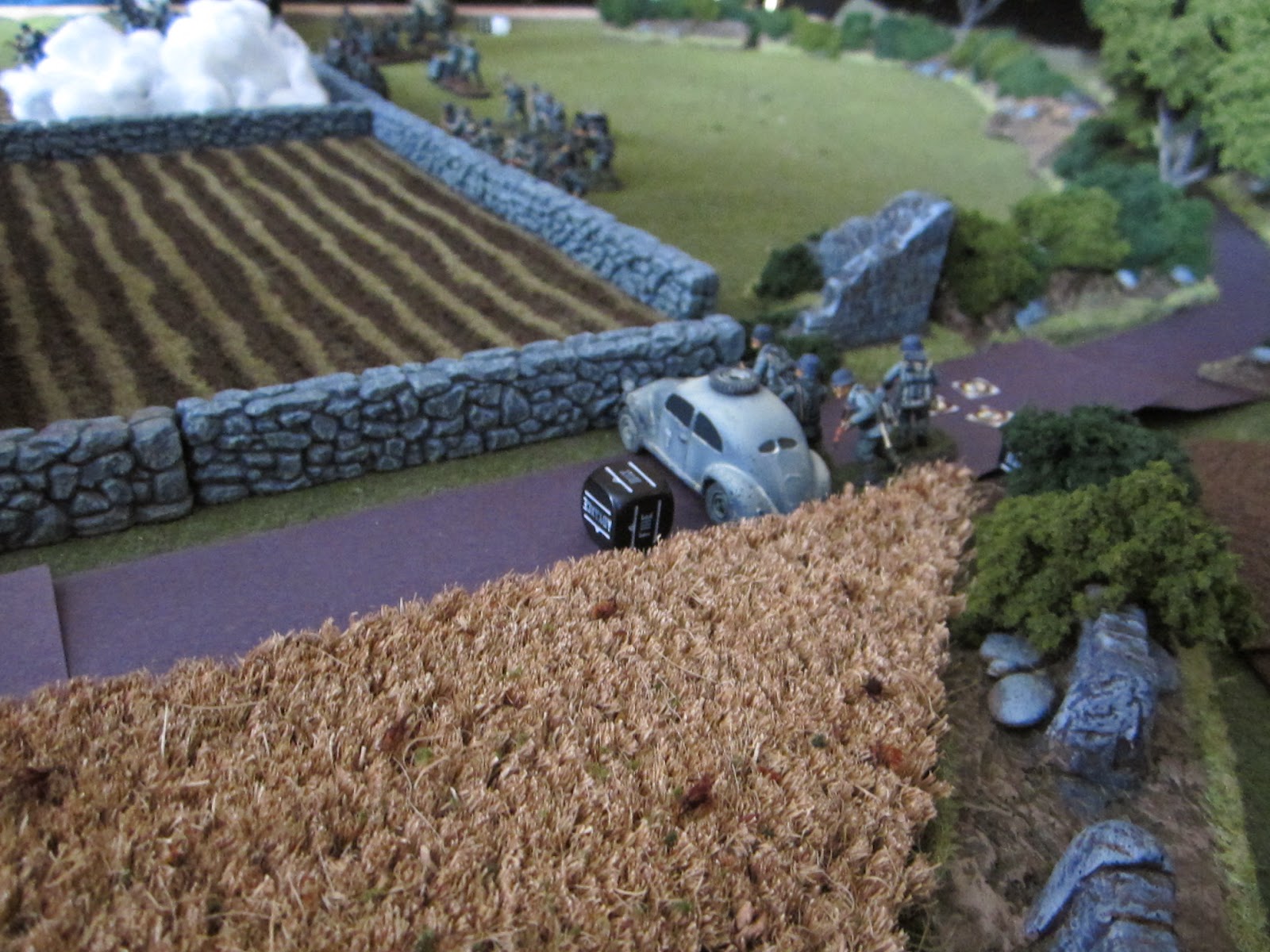 The Ranger platoon started to move onto the table with the US Air Corps FO team setting up in a ruin to the north of the battlefield. 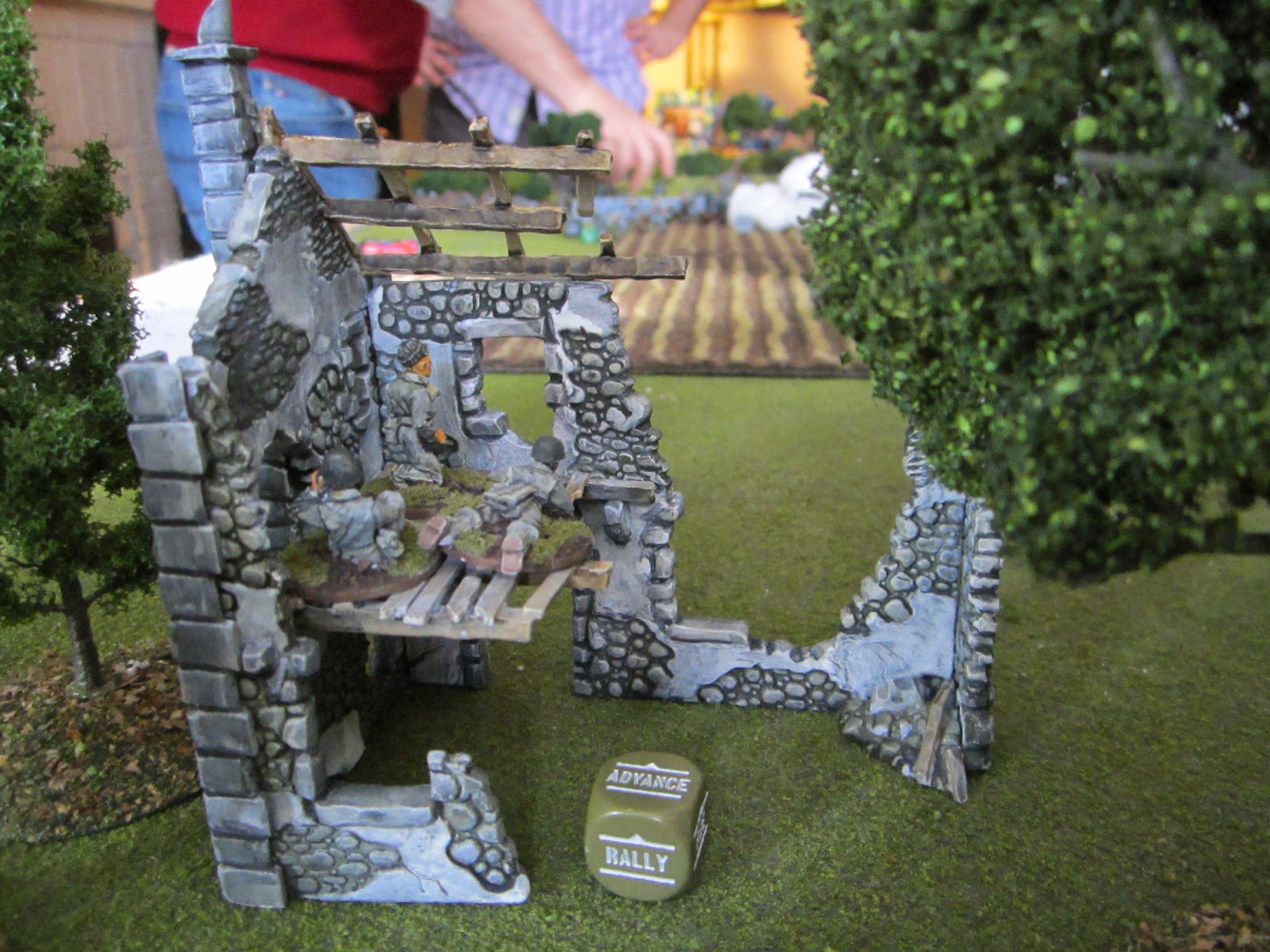 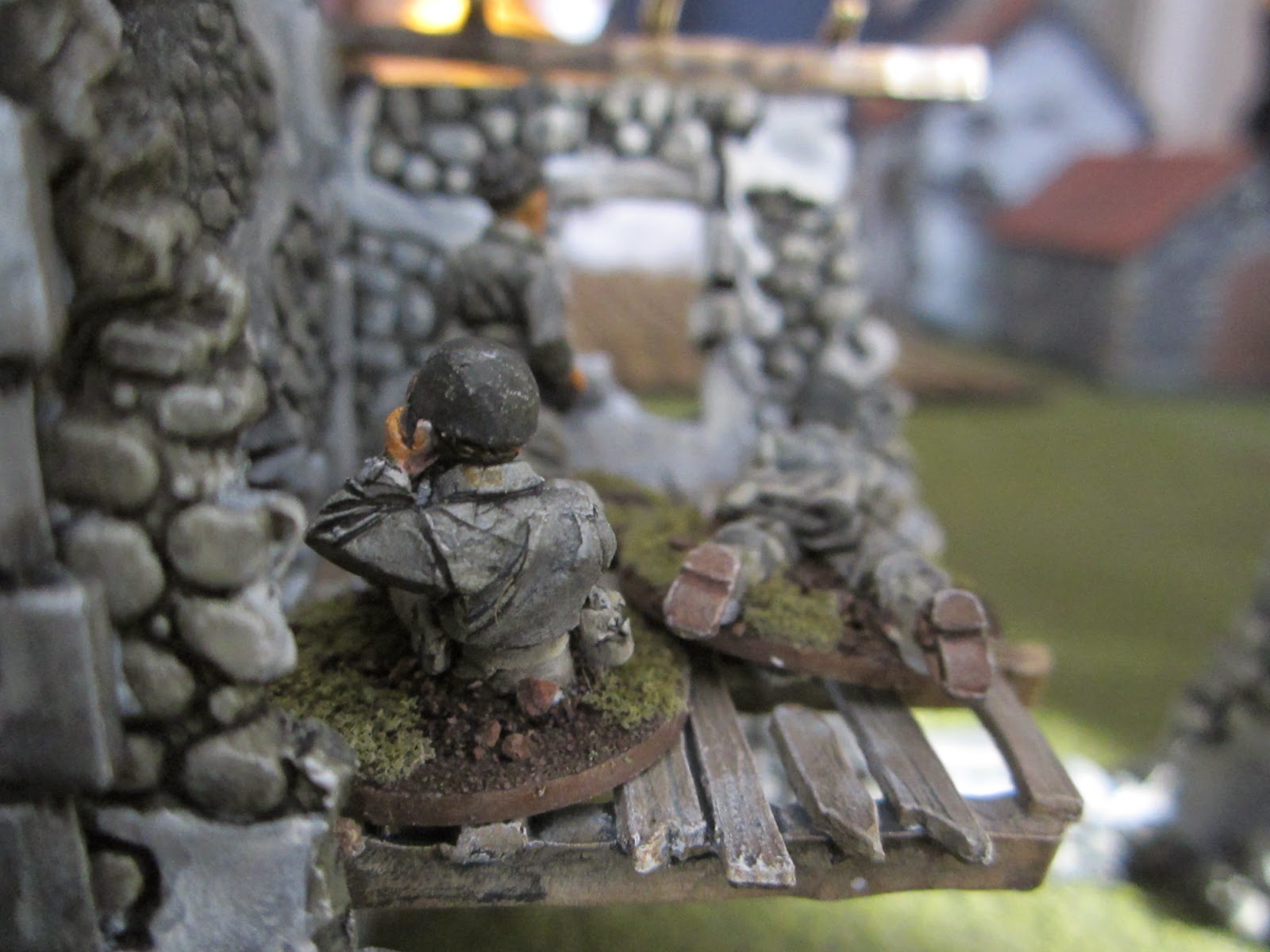 The 222 armored car attempts to suppress the Americans  while the German assault element starts to mass and advance on the right flank of the German line. 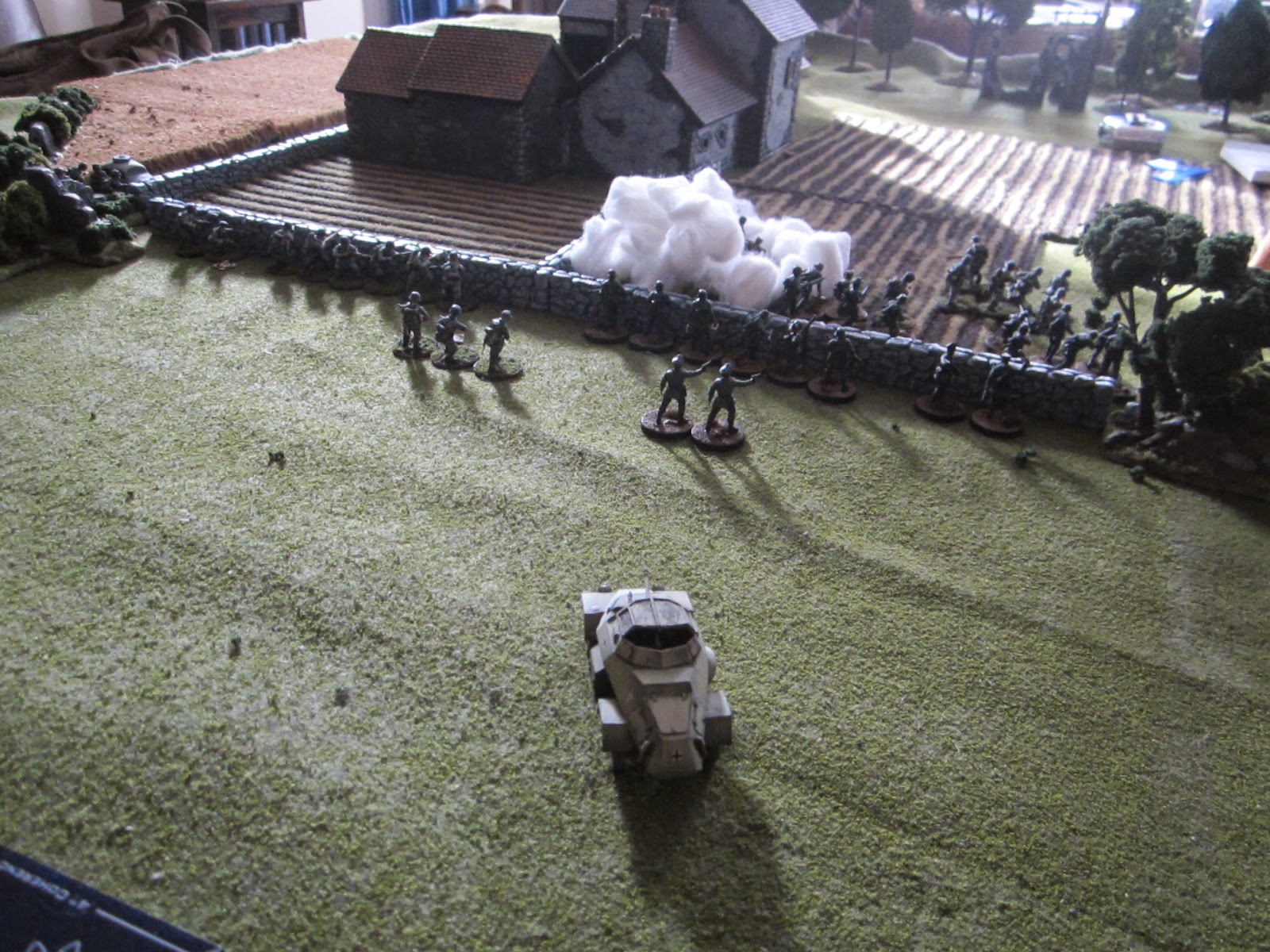 The Ranger platoon advances toward the Chateau gate to lend a hand in the defense of Chateau de Vaumicel. 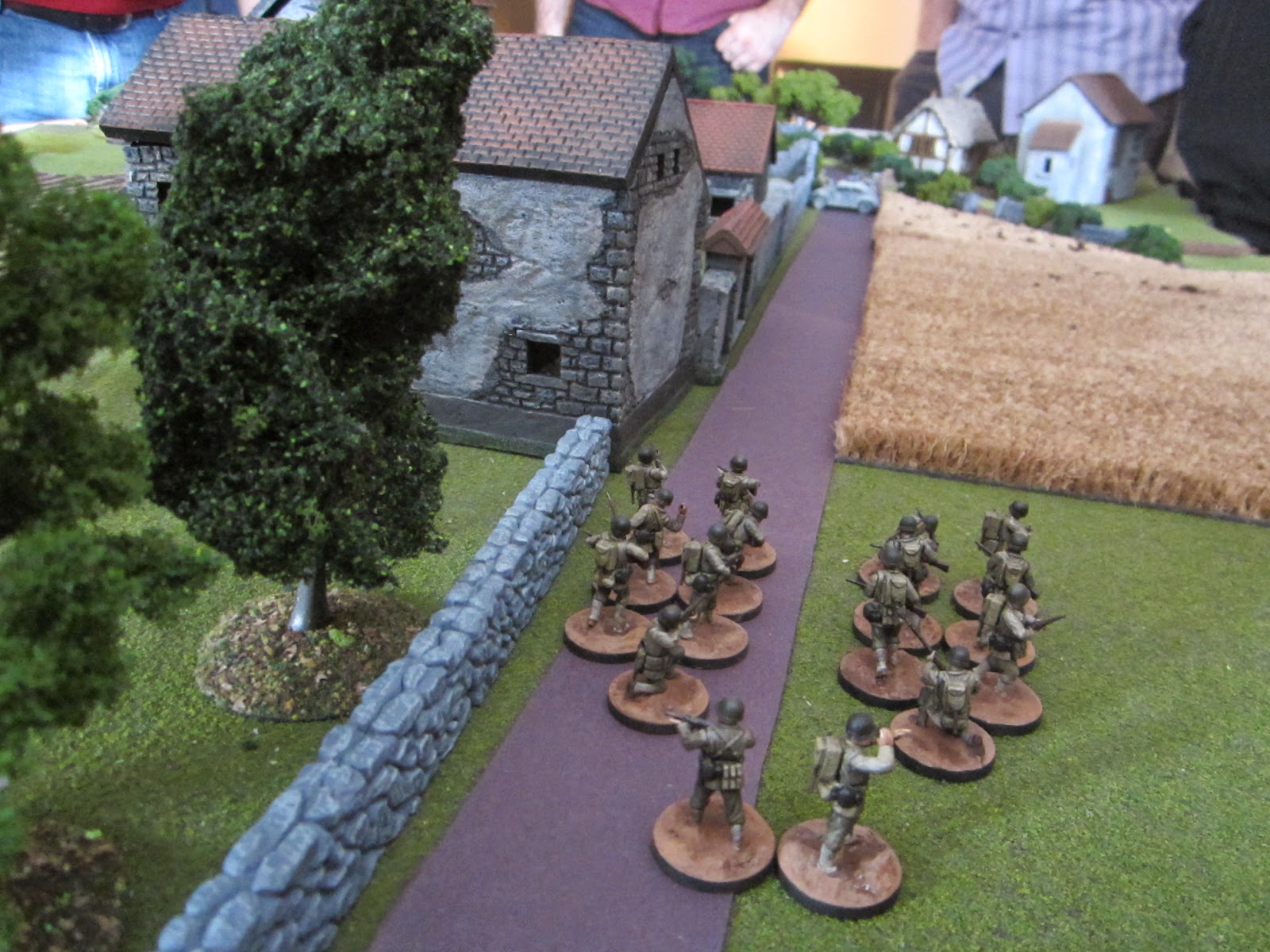 The German command team plots their next move. 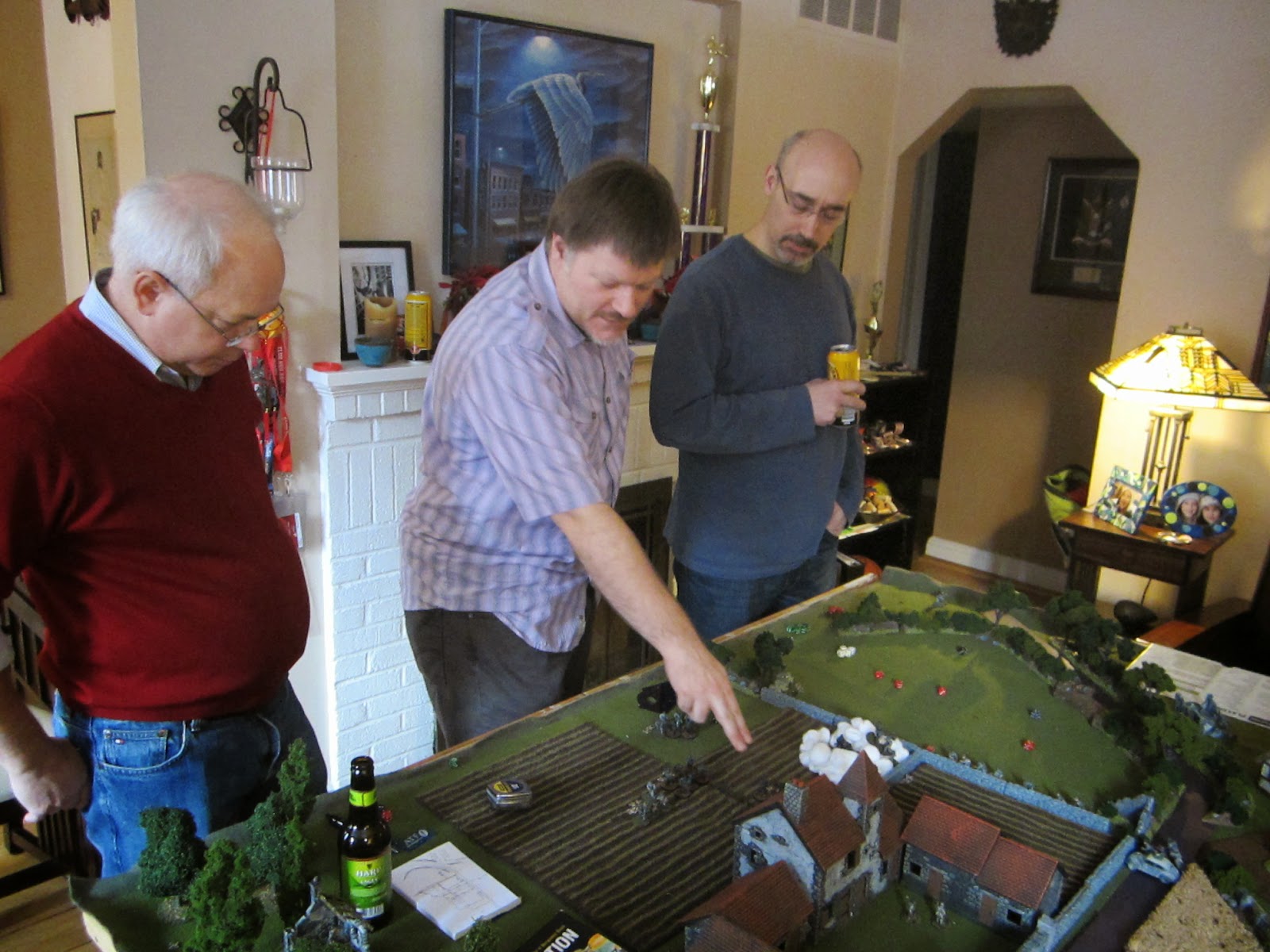 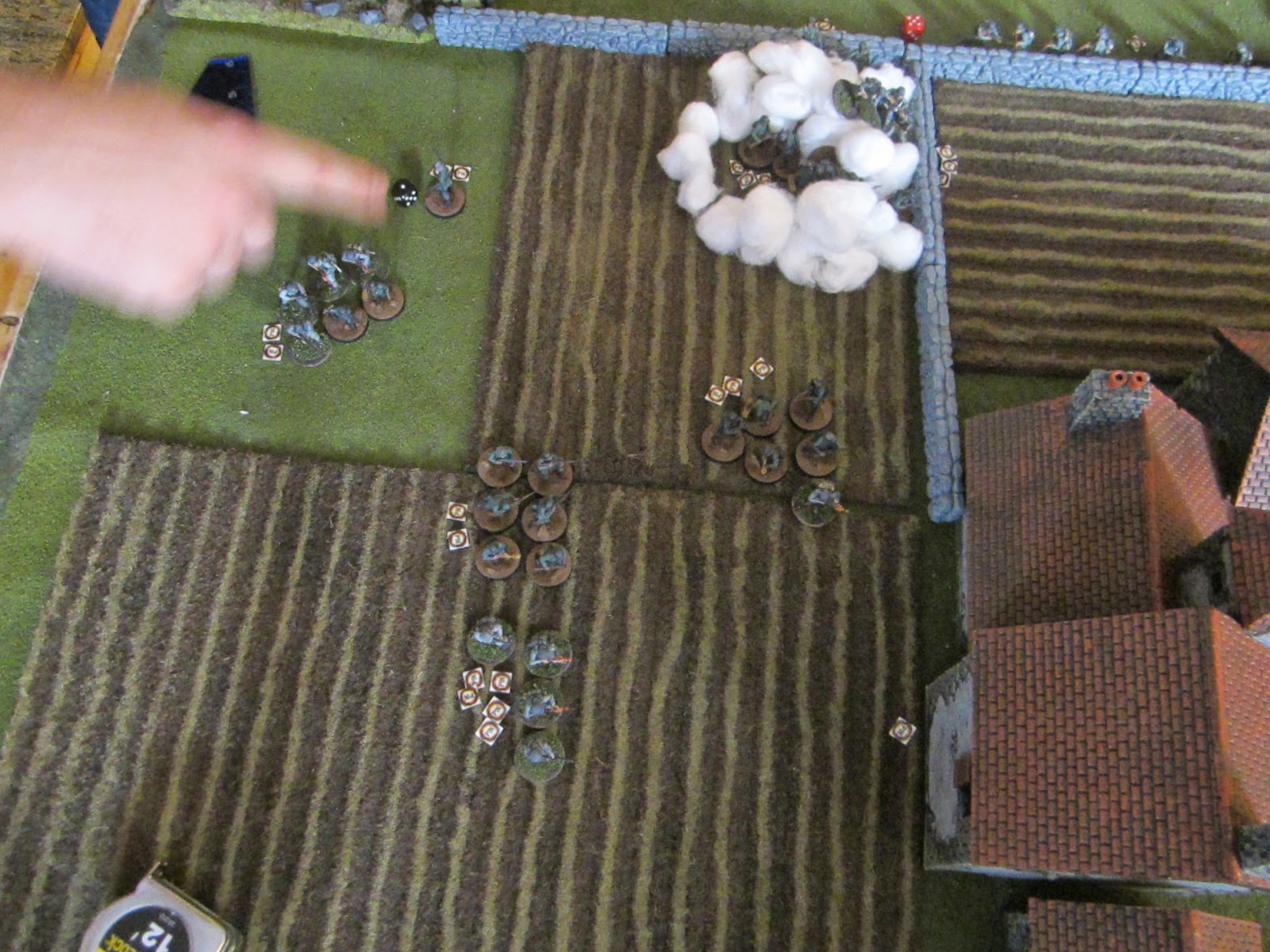 Elsewhere, Casey introduces Mike to the absolute awesomeness that is Bolt Action. 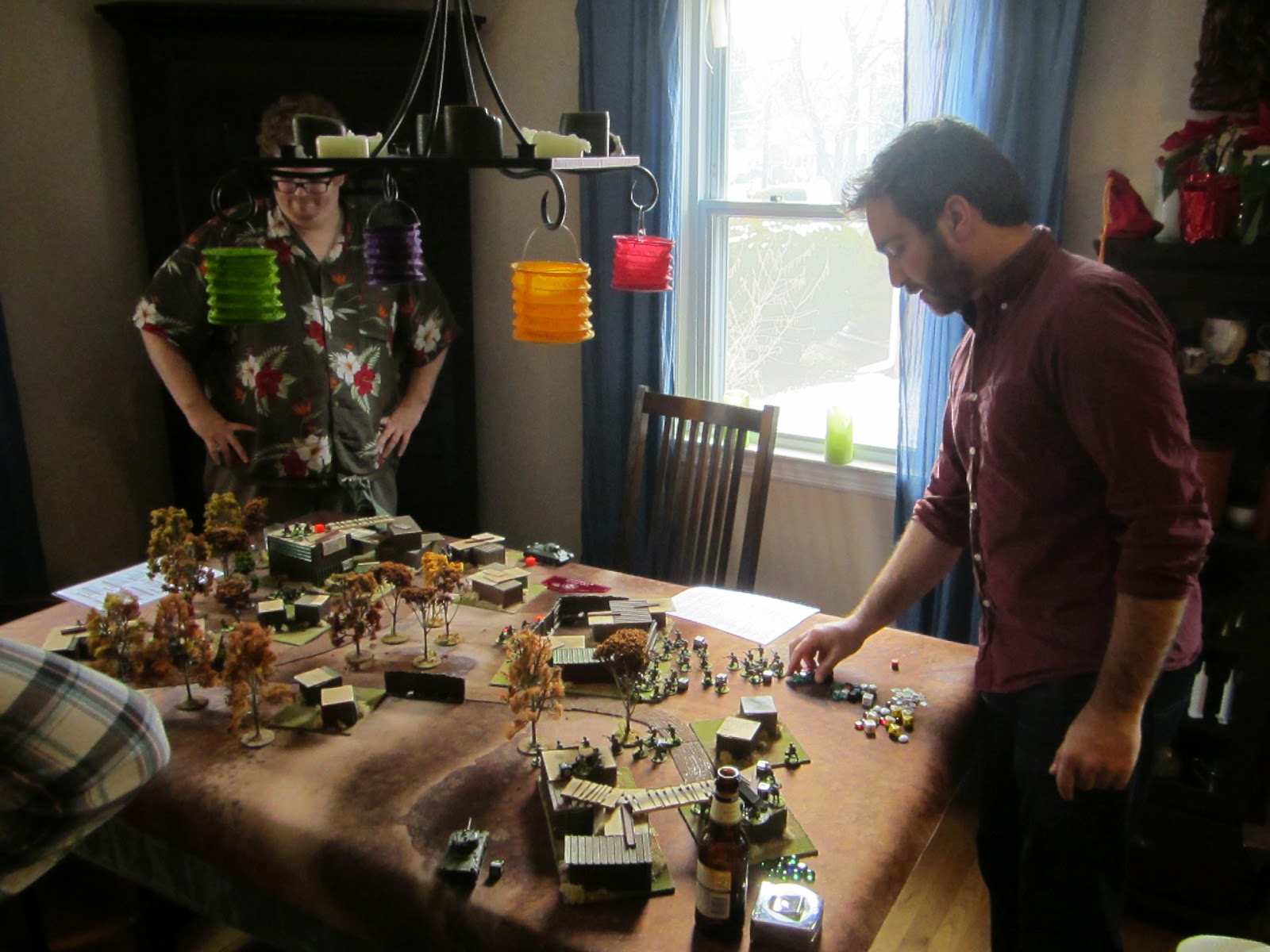 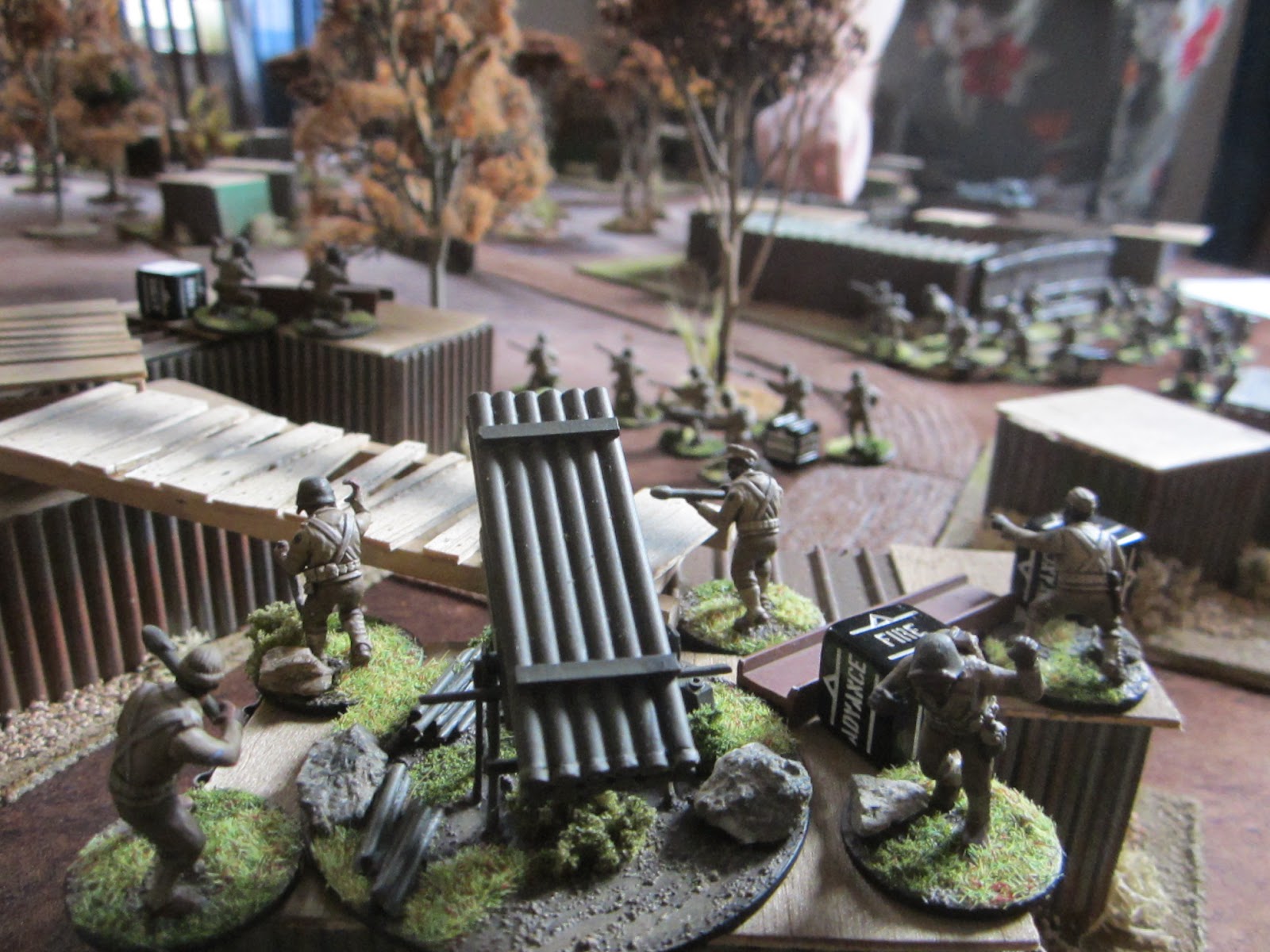 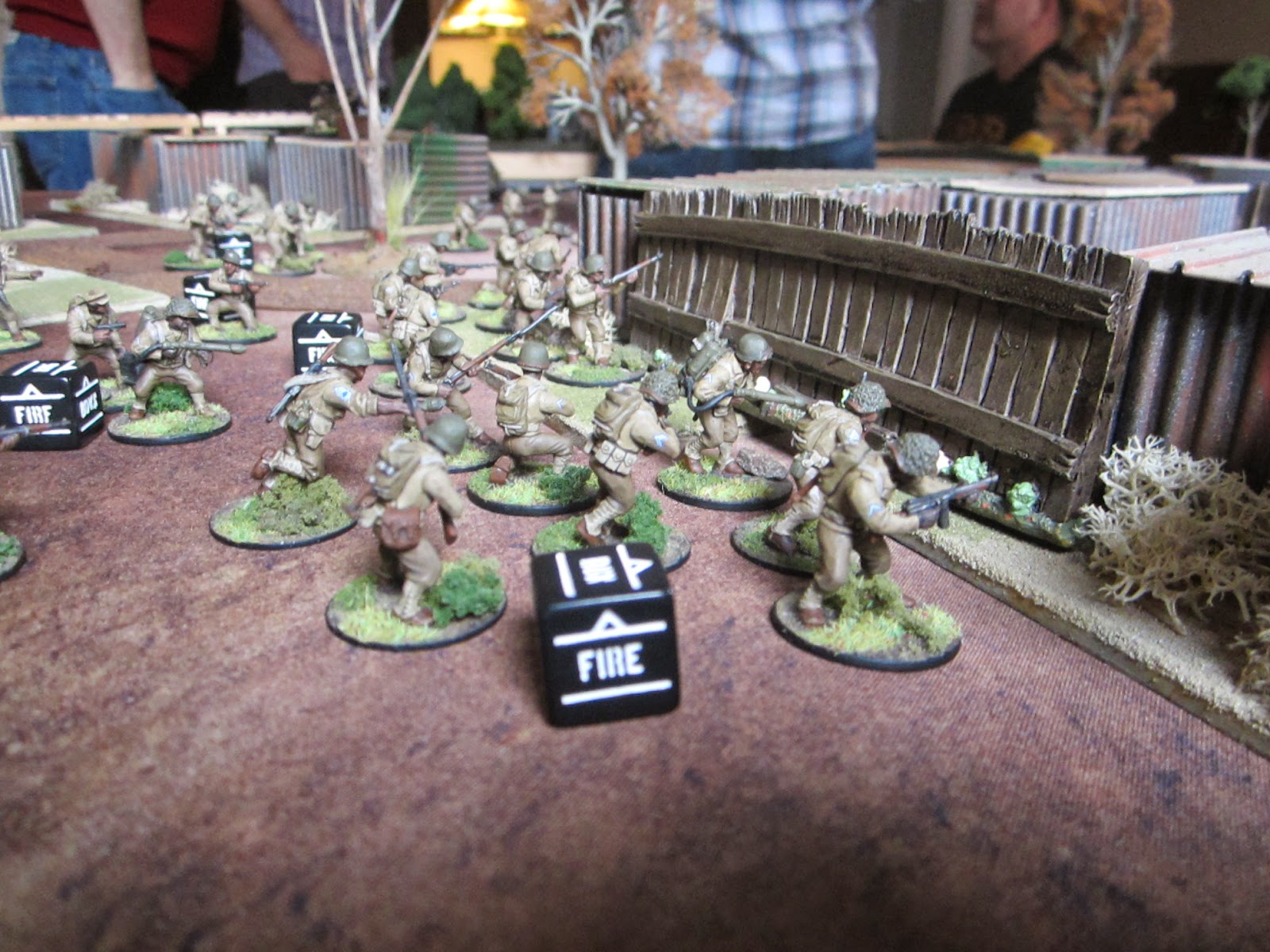 And then I inexplicably stopped taking pictures...

...So here's the rest of the story... The German attack really started to falter under the sustained fire from the Americans in the Chateau.  I elected to give them the reserve half track squad, which they put right into the fight along the road on their left flank.   The German Grenadiers finally reached the breach site, where their lead assault squad was annihilated by, get this, the American Bazooka team.  It happened.

Then the Americans called-in an airstrike on their own position with a bad roll, while one platoon from the Rangers incredibly failed to obey orders to enter the Chateau.  The high point of the American fight was the National Guard sniper taking out the German Commander.

In the end, the Germans were able to get into the Chateau, but they were unable to dislodge the Americans.

We all congratulated ourselves on a battle well-fought, recharged our drinks, then I dug out the victory conditions and determined that the Germans had scored 3 of 5 victory points while the Americans scored 2 of 5 which, no matter how loudly those cheatin' Germans yell about it, is a draw.  From what I saw, the deciding factors for this game were the offsetting air strikes, the insubordinate Rangers, and the ability of the Americans to engage the Germans from the cover of the Chateau.

Thanks to all the guys for making this event possible.  I think I have a pretty good bead on developing asymmetric wargame scenarios based on what we learned from this mini campaign and I am geared-up for more.  We definitely have a good group of narrative wargamers beginning to coalesce around this system.  Very fun stuff!

Tune in next time as we head to North Africa for some DAK v. 8th Army action!
Posted by Unknown at 9:12 PM No comments: