It's a new year for awesome wargaming in the Tactical Gaming Society and we got off to a great start with Richard's presentation of the Battle of Amiens.  Using modified Bolt Action rules, Richard gave us some Great War action that involved an unusual amount of maneuver, much like the actual battle in 1918.

I'll leave the full BatRep to Richard.  Here I will focus on my portion of the battle-an Australian assault platoon on the right flank.  Comprised of four infantry sections and two tanks, we replicated the tough-as-nails quality of the Aussies by giving them the "Tough Fighters" special rule, which made them especially dangerous in close combat.

First things first.  Check out the awesome table that Richard made for the game.  His goal was to replicate the pastoral landscape of the Amiens battlefield, which was fairly unspoiled when compared with other more contended regions of the Western Front.  I'd call this success.  Check out the duckboarding.  Mindblowingly detailed. 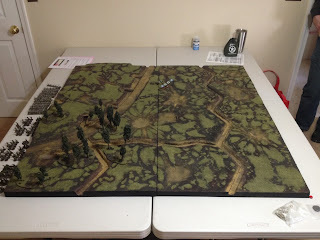 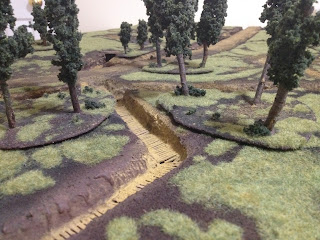 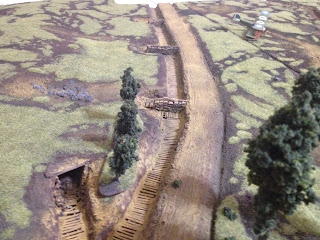 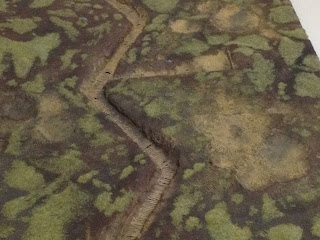 A few fresh craters give a preview of things to come. 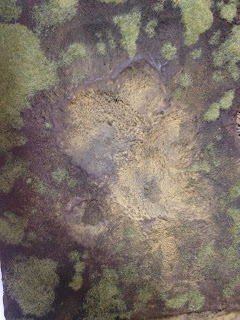 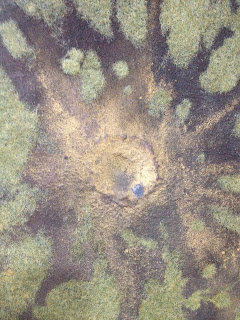 Here's my platoon.  Richard went with 18mm, which allowed us to play a company sized-game in a scale that made the battlefield look right. 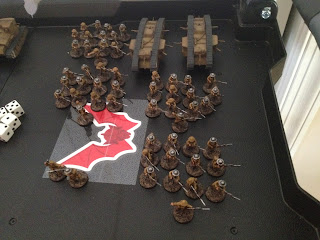 Following a massive rolling artillery barrage.  I started by advancing my tanks on the right. 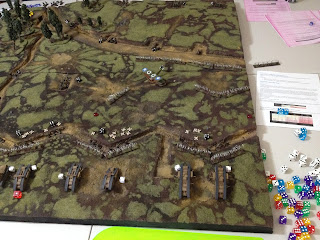 As the tanks prepared to knock holes in the barbed wire, I moved my infantry squads up and prepared to assault the first line of trenches. 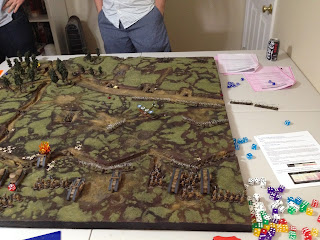 Which they did with frightening efficiency. 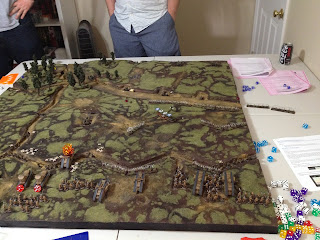 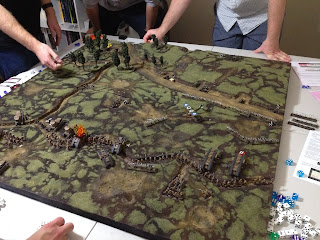 Having brushed the German defenders aside in the first trench, the Aussies prepare to assault the second trench line. 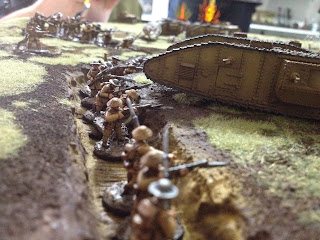 Using a downed Sopwith Camel as a guide, the Aussies continue their advance across the alarmingly open ground. 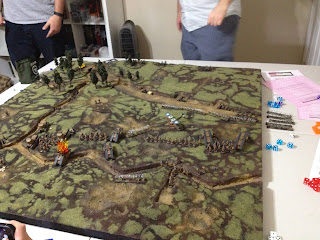 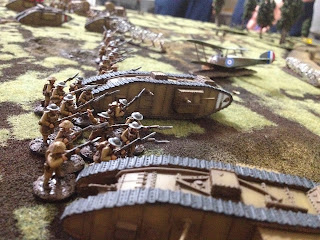 The German artillery, having recovered from the Commonwealth bombardment, starts to gain hits against the Aussie tanks, disrupting the advance somewhat. 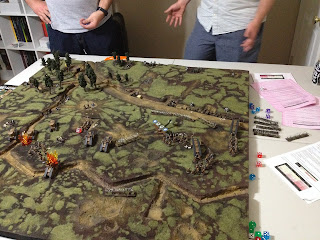 But no worries.  On the far right flank one squad uses a tank for cover to get within assault range of the second line of German trenches. 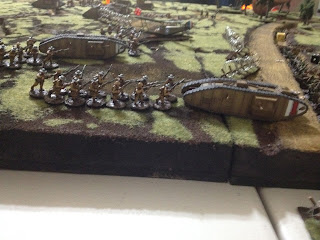 A German flamethrower team managed to set my lead tank alight, causing the crew to bail out, but the Infantry squad bypassed the burning wreck and gained the second trench line with another devastating assault. 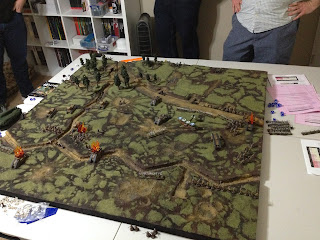 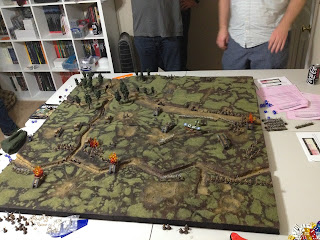 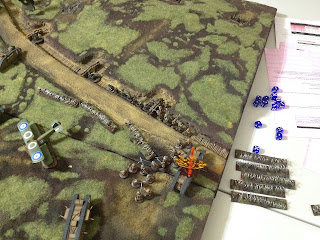 The Germans tried to eject the hard-bitten Aussies from their new claim with machine gun fire, mortar fire, and counter assaults from two units.  Nothing would dislodge the Diggers now that their blood was up and they ended the game with the furthest advance of all commonwealth forces.  Kind of like it really went down in 1918. 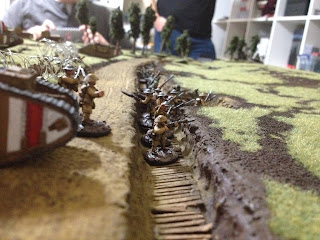 A very very good game.  My teammates Gavin and Keith had a tougher go of things in the center and on the left, where a German MG and an improbably resilient flamethrower team had some good effects against tanks and infantry squads.  Speaking of a tough go, our valiant opponents, Casey, Rhett, and John had difficulties from the get go due to some hot artillery rolls on our part (which they were unable to match with their artillery rolls over the course of the game).  Had the German players the hotter dice, our advance would have been slowed significantly.

Great game.  It looked right, it played right, and it was a ton of fun with six very good players and a top-notch GM.  I really like playing with the smaller scale.  It looks much better than 28mm for this size battle.

Back in August I took you through the struggles of my first attempt at blue water water effects.  If you remember, I was using acrylic gel medium for the first time.  I wanted some real depth to the water, so I got a tub of super heavy acrylic gloss medium and slathered it onto my test panel.  After a week, it looked like this: 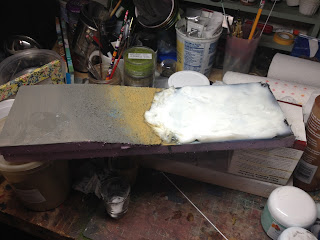 I promised I would get back to you with the results once the gel clarified.  It is now nearly five months since I schmeared the test panel, and this is what it looks like: 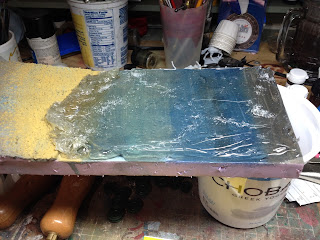 As you can see, the super heavy gel medium holds whatever shape and surface marks you make (intentionally or not), so you can sculpt turbulence and waves into the medium, but you have to be very careful and deliberate with the technique you use to manipulate the gel.  Another problem is that the gel is too clear.  The transparency and clarity creates the illusion of a cup of sloshing water magically contained on the surface of a styrofoam panel colored with blue and ochre pigment.  Does not really evoke ocean.  I'm sure a skilled sculptor could make this work, especially for a large-scale display model.  For 28mm and smaller wargaming, though, this isn't going to cut it. 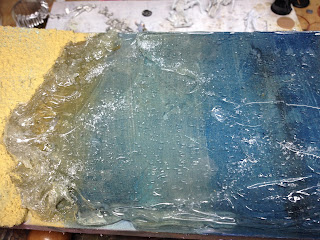 Finally, there are the bubbles deep inside the cured gel.  Again, a really talented sculptor could make these work.  I cannot. 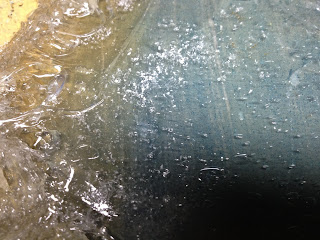 So, in the end, I fall in line and recommend what so many other, more experienced water effect modelers have been saying all along: Create the illusion of depth with paint or pigments applied to the board surface and then use a thin coat(s) of acrylic gloss medium to model the water surface and waves.  Like this: 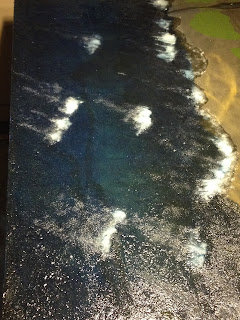