Our newly-formed wargaming group met for the first time this past weekend and played a Bolt Action scenario based on the Australian defense of the Tobruk garrison in April 1941.  John and I put together a scenario, the forces, the terrain, and GMed the game jointly.

It was a lot of fun and we all learned a lot about large-scale games.

The bottom line is that I am really excited about this gaming group.  It is a great group of guys dedicated to high quality miniature wargaming.  I really look forward to future games.

The day started with a bunch of dudes gathering in the common room at Drew's condo.  Many (most) of us were meeting for the first time.  After a brief champagne toast to celebrate John's birthday (happened earlier in the month) we all got down to business.  More or less.

Owen took some great photos of the game from a (mostly) DAK perspective (more photos to follow as they come in): 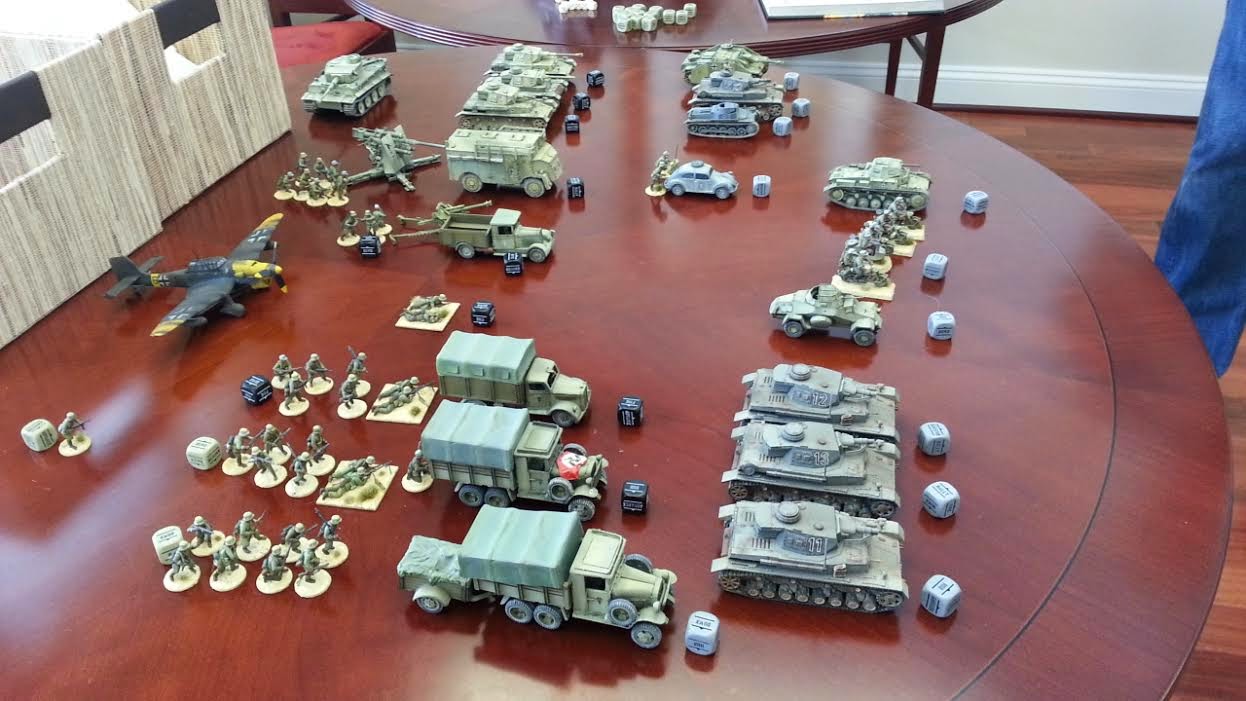 Here's a shot of the formidable forces of the Deutsches Afrika Korps organized for battle.  It included a company command element with three tanks, a reconnaissance platoon, an infantry platoon, two tank platoons, and an artillery detachment.  Lots of activation dice. 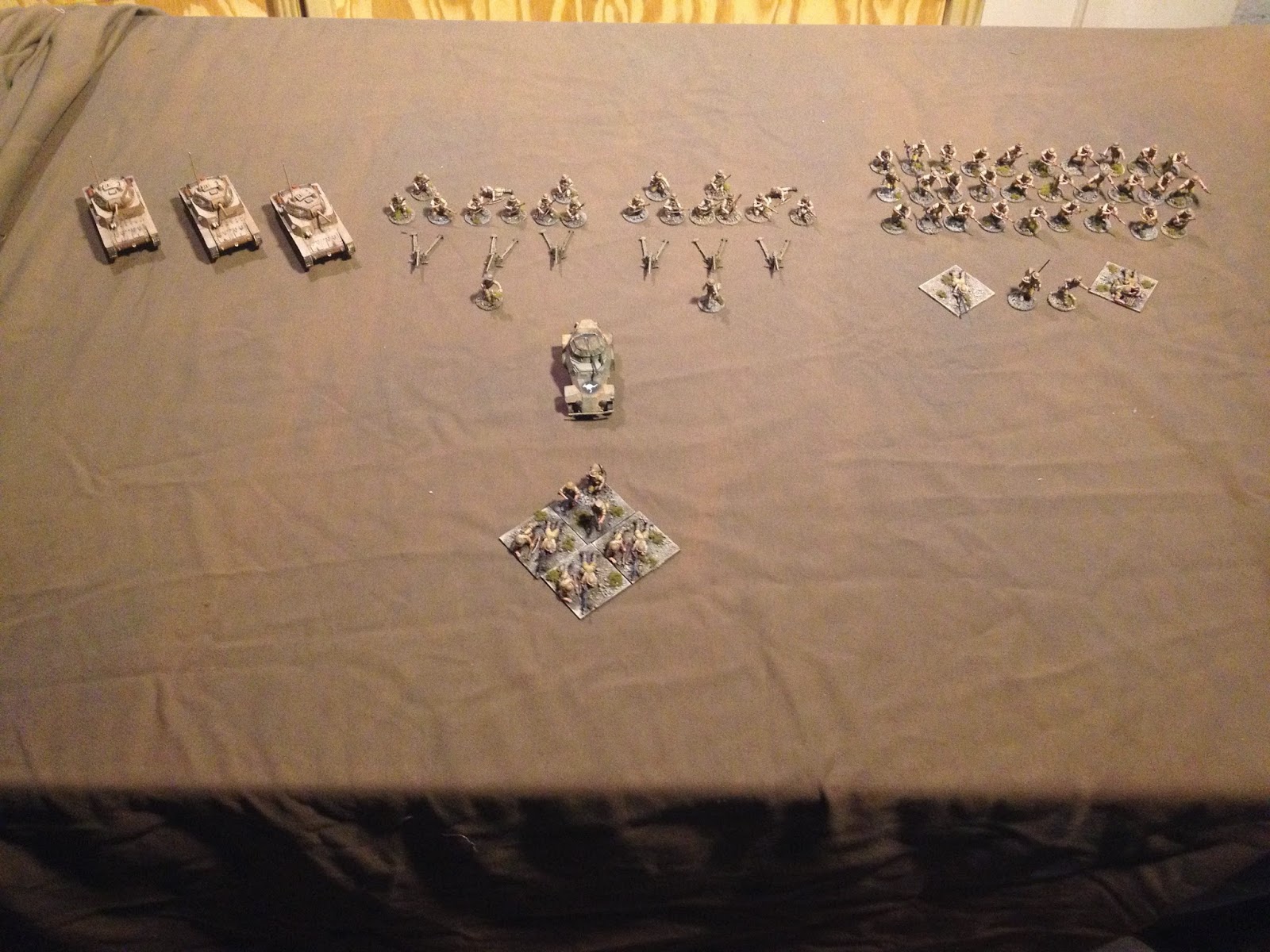 The Australian side consisted of a Company HQ with a captured 222 armored car and 3 Bren teams, an infantry platoon, two light anti-tank platoons equipped with captured Italian Elefantino guns, a platoon of captured Italian M13/40 light tanks, and one bad-ass Artillery FO.

The DAK fought as a platoon pure formation while the Australians task-organized into tank-killing teams ready to defend their obstacle belt.

As this was a GM-run game, we were able to utilize true hidden setup for both the Aussie units and their obstacles.  This presented considerable problems for the DAK. 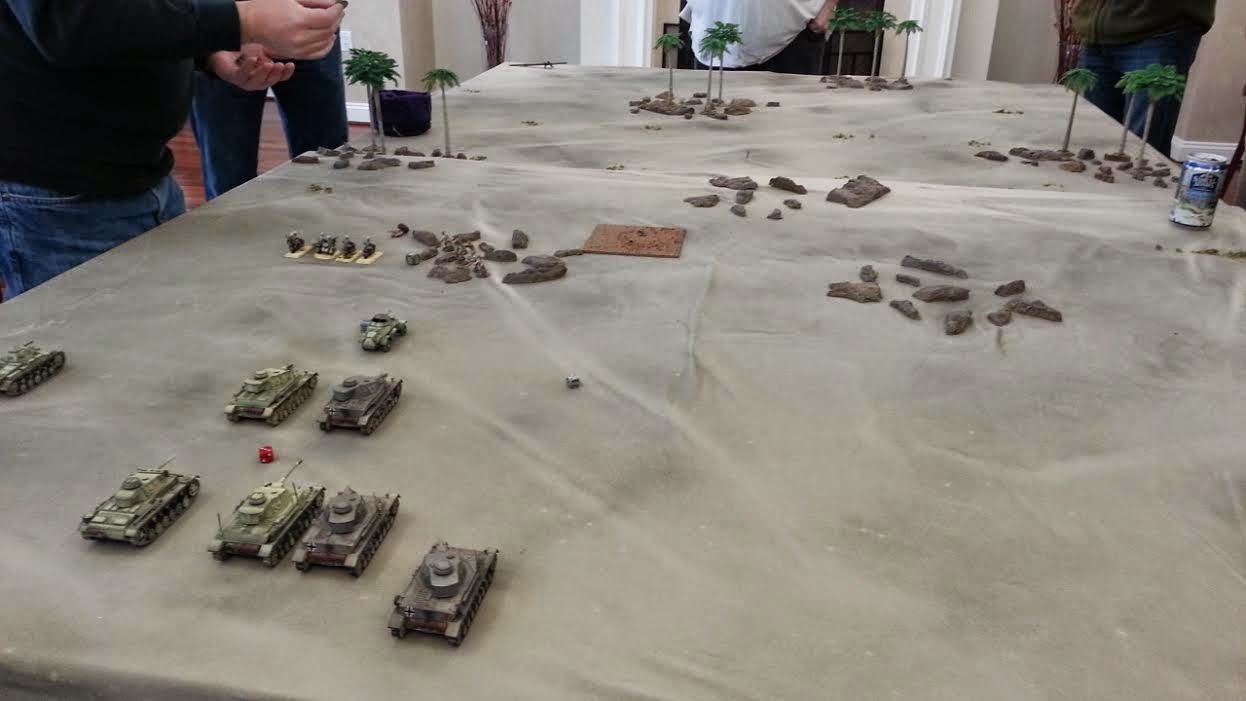 Scouts Out!  DAK reconnaissance searching the desert (unsuccessfully) for the Australian obstacles and anti-tank guns.  That motorcycle scout squad by the rocks in the upper left is about to receive a nasty surprise.  On the plus side, they did locate an Australian infantry squad. 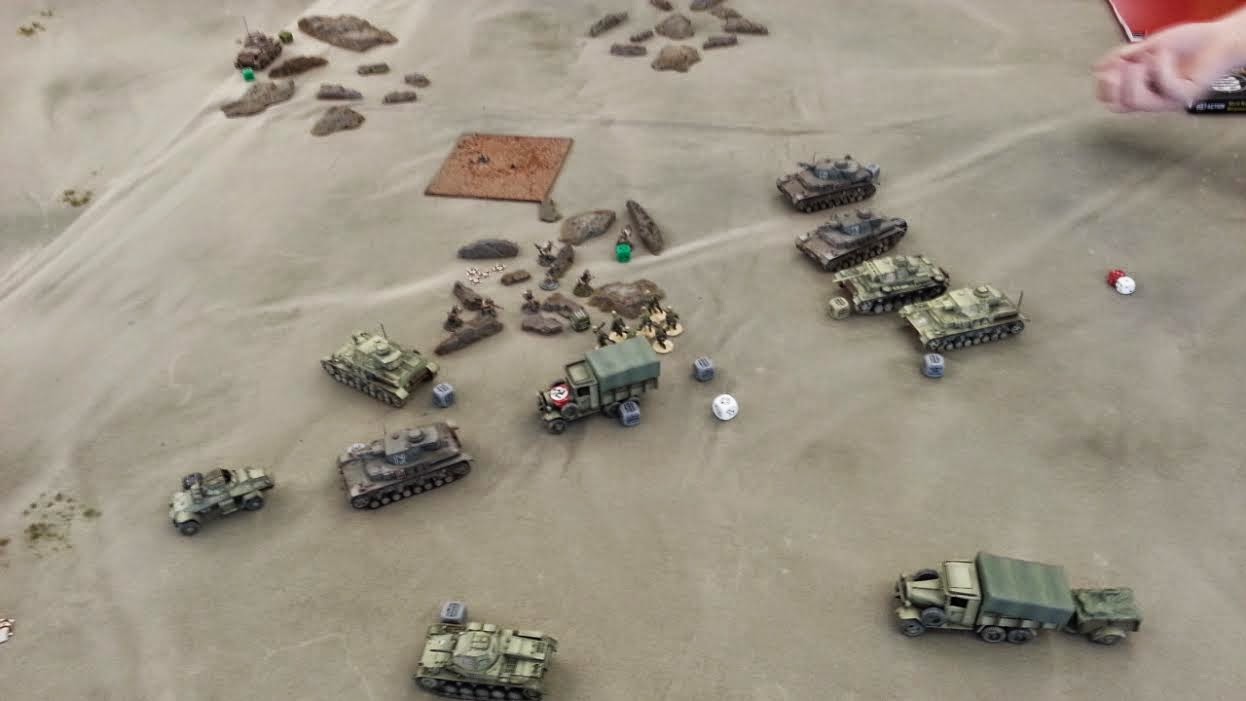 Trucks with infantry move up to try to locate and breach the Aussie obstacles as tanks and dismounted infantry deal with a tenacious squad of Aussie infantry in the rocks.  This squad caused a lot of problems for the DAK as they just.  would.  not.  die. 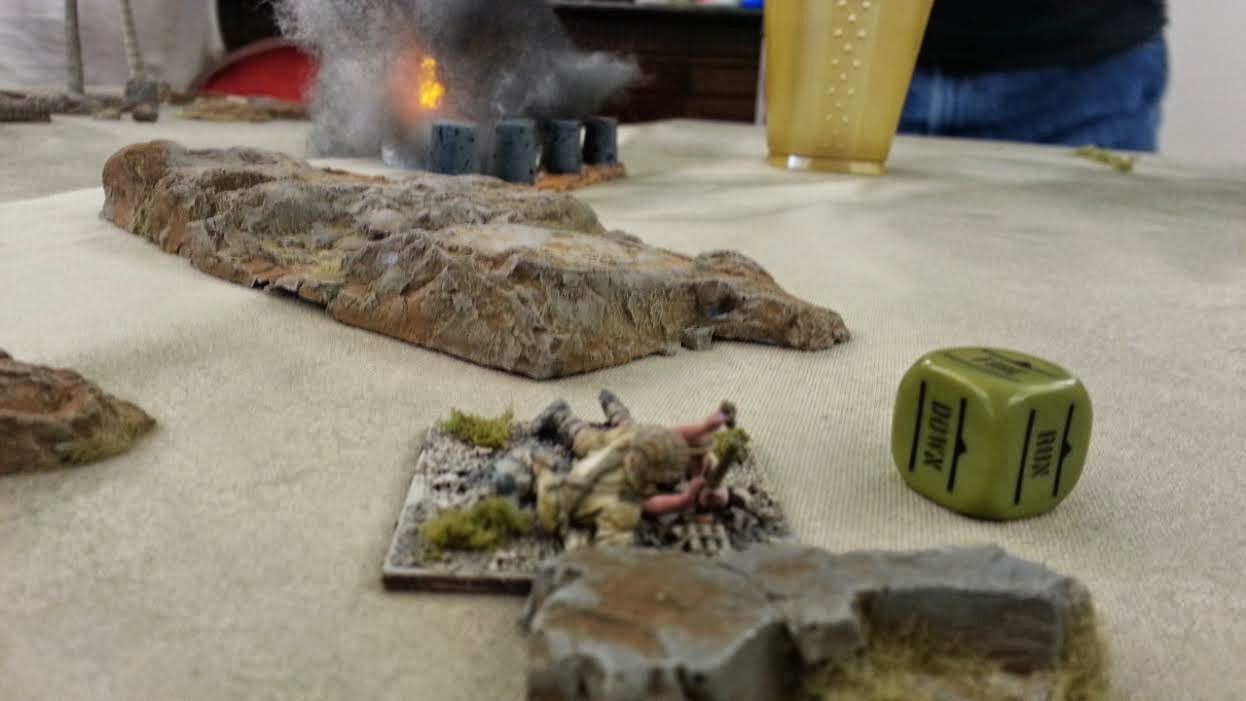 Aussie light mortar team tries valiantly to suppress a DAK 88 as a captured Italian M13/40 burns in the background (after running into its own anti-tank obstacle). 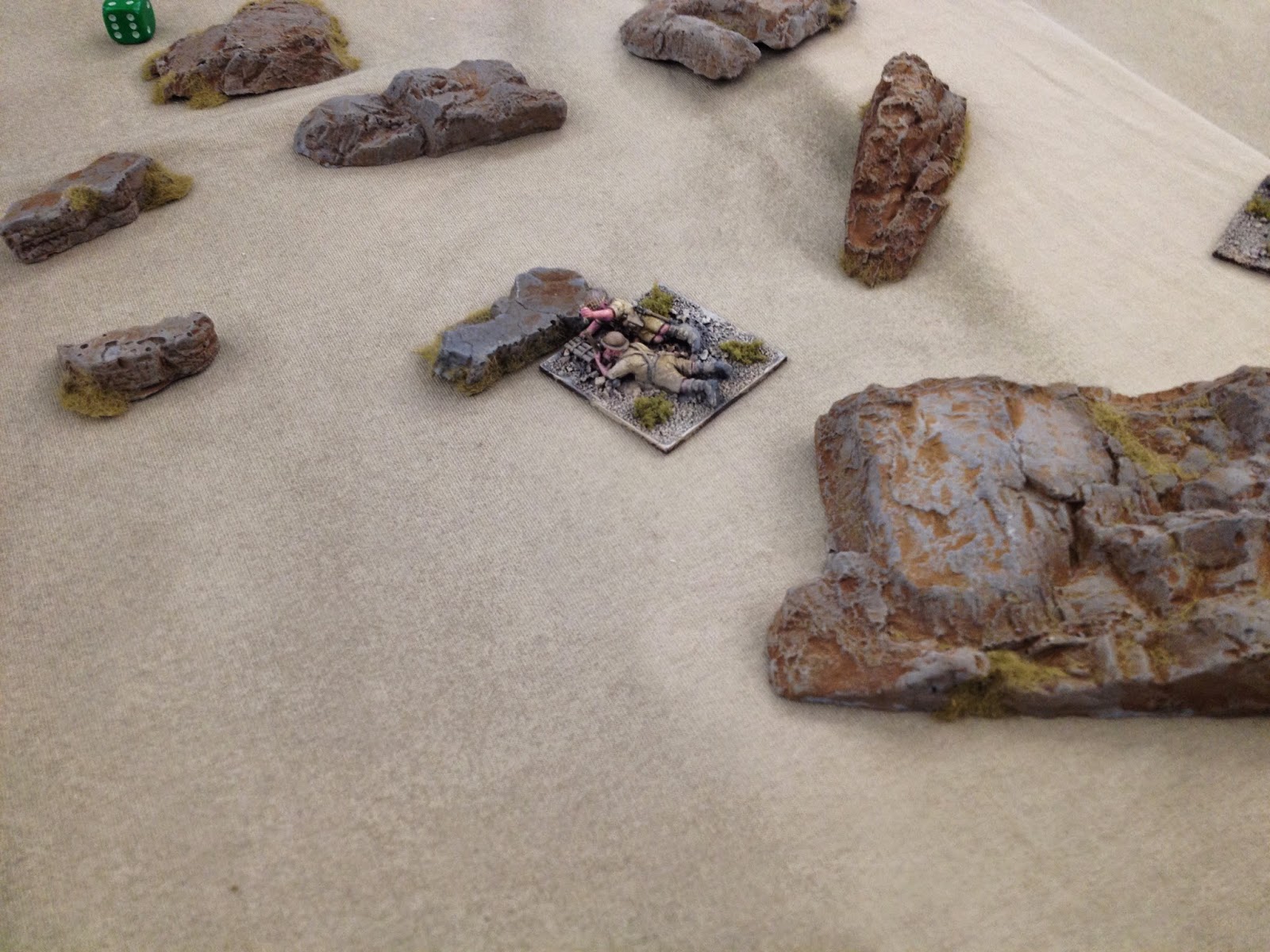 For whatever reason, that mortar team was really photogenic in its spot amongst the rocks.  I had to take a break to snap this shot. 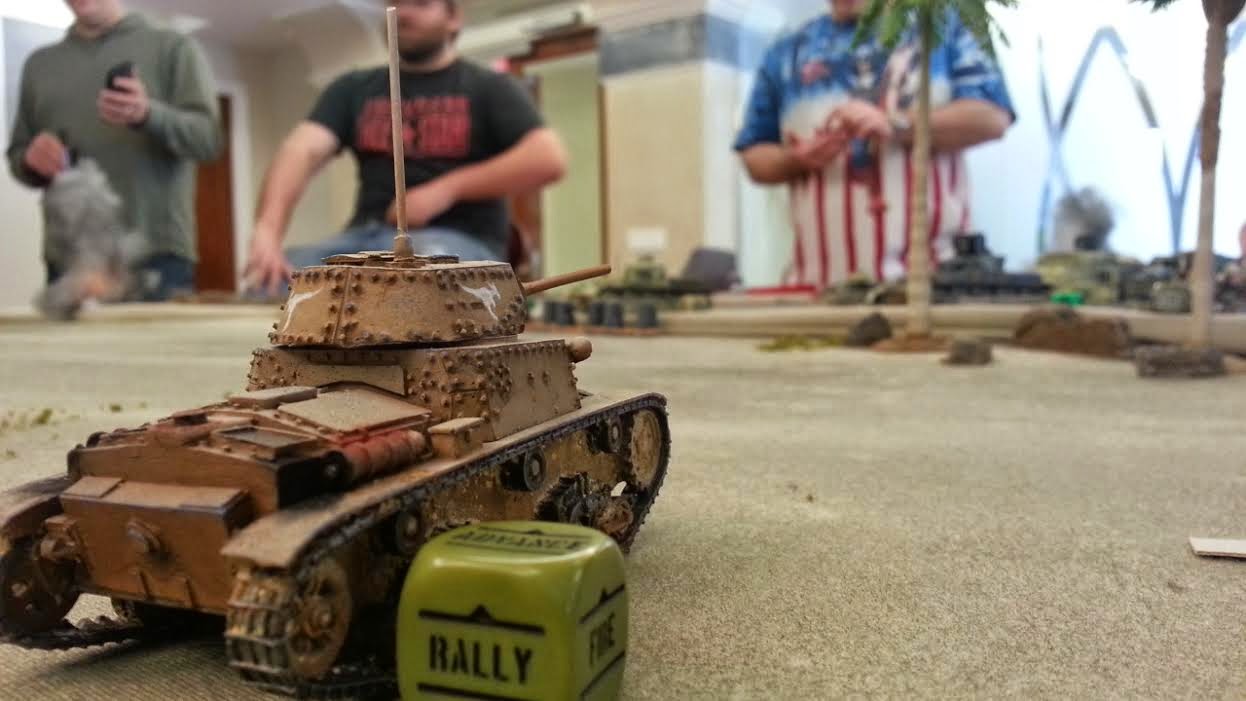 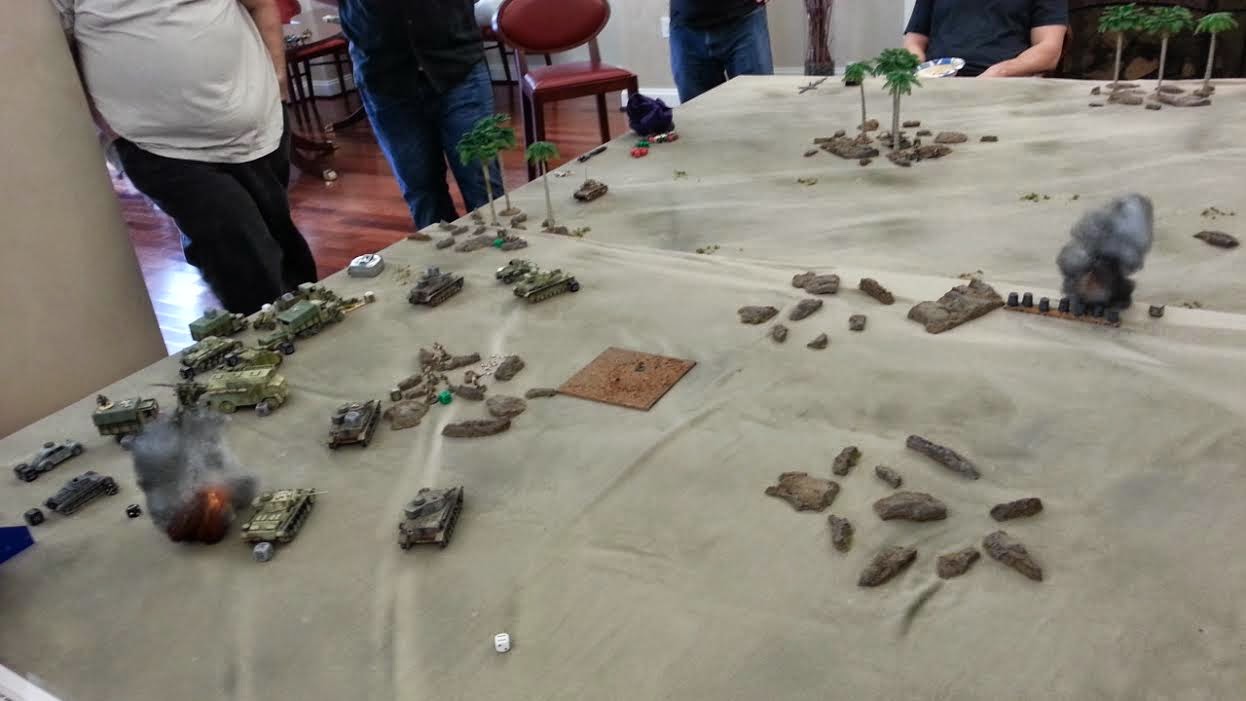 The DAK attack starts to bunch up while they are still looking for a good breach site.  Note the burning Panzer IV in the bottom left.  Courtesy of a ridiculously effective Australian artillery barrage 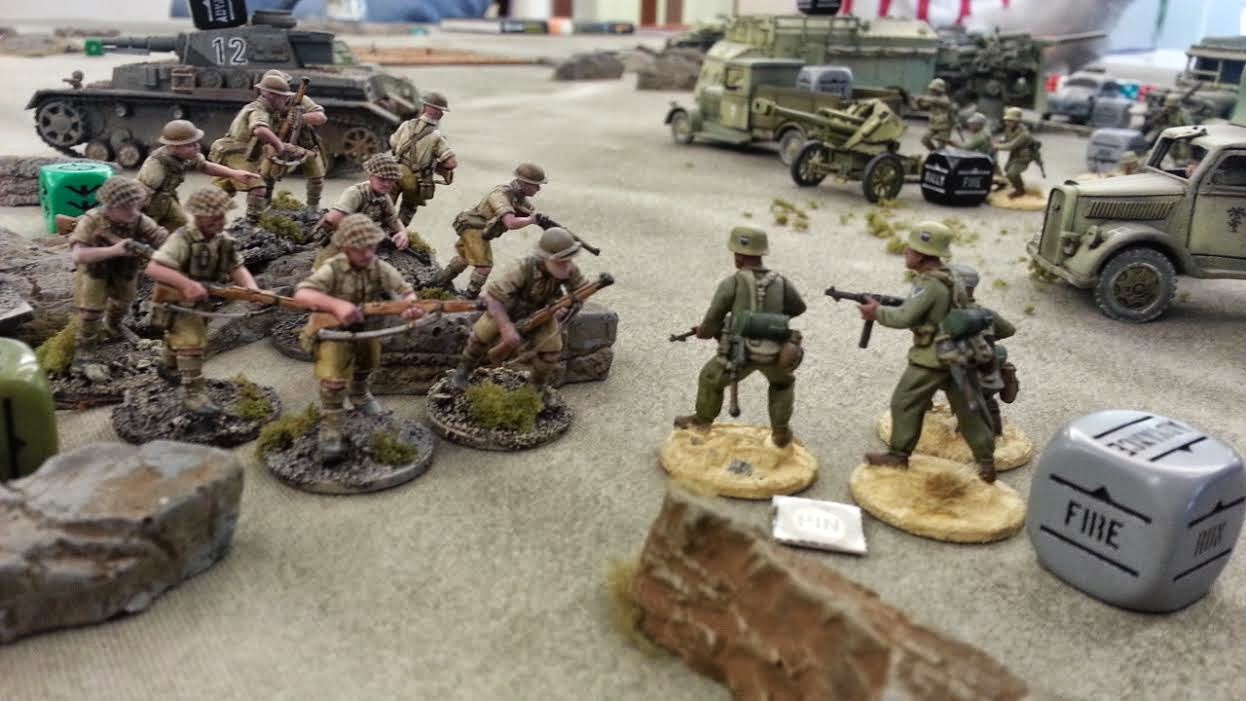 DAK and Aussie infantry gettin' after it in the rocks overlooking the breach site. 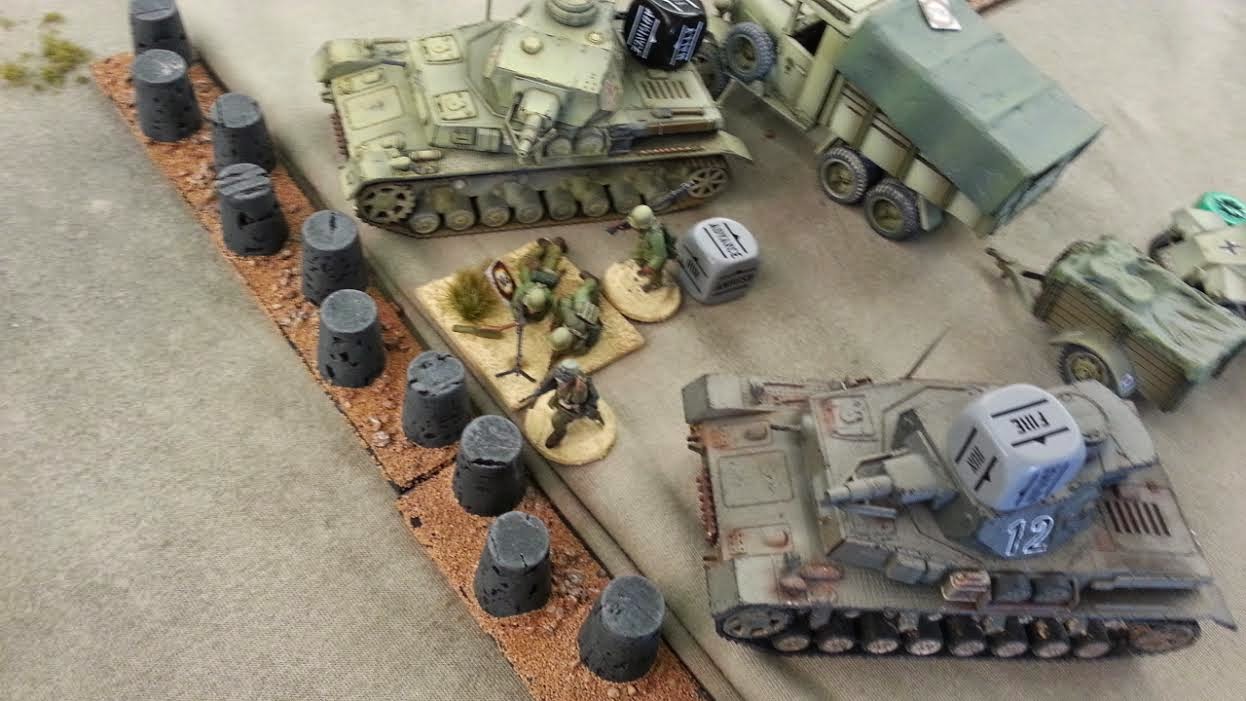 DAK infantry trying to reduce the obstacle and open the breach. 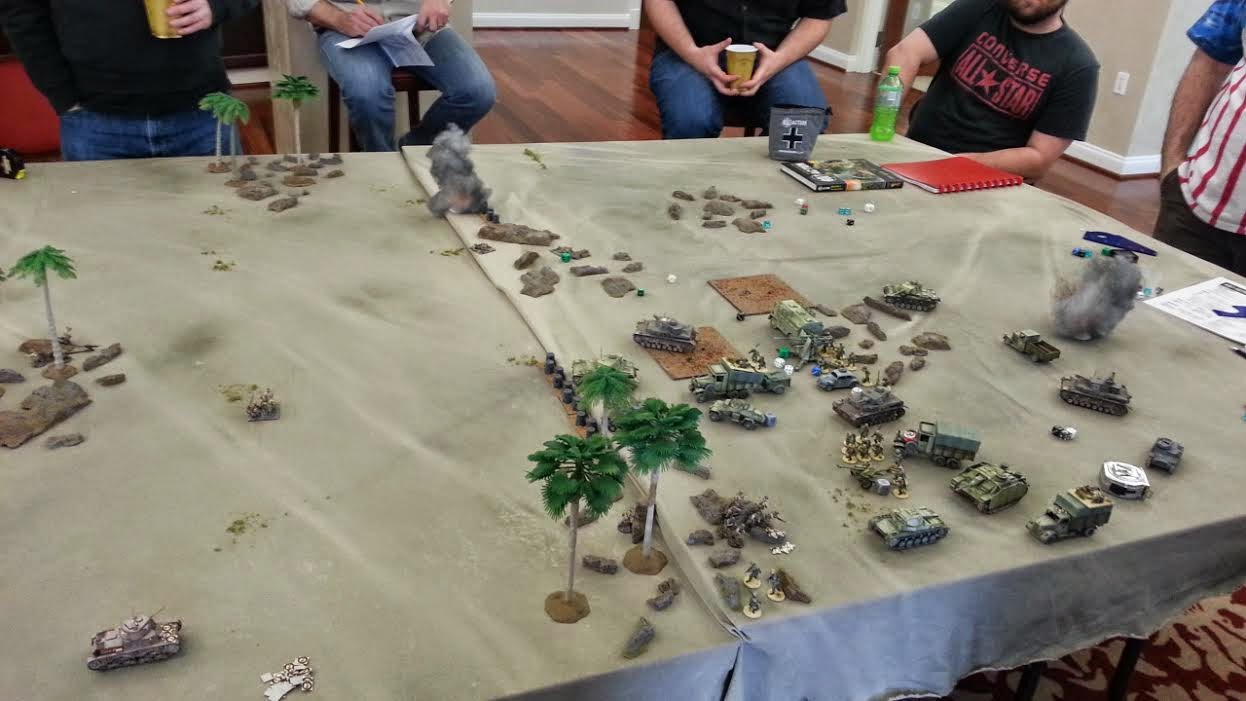 Endstate.  (Note the Aussie FO team, middle left, charging toward the DAK breach site.  Resist by any means possible, Mates).  Anyhow, the DAK attack culminated at the obstacle belt, halting the attack on Tobruk.  For now... John and I going over the results of the game with the obstacles and Australian positions revealed for both sides to see.


Man of the match definitely goes to the Aussie Artillery FO for destroying one tank and putting about a billion pin markers on the rest (before giving in to suicidal tendencies and charging toward the DAK breach point).

Thanks to John for getting the North Africa ball rolling and letting me GM this game with him.  The players all seemed to have a really fun time.  Thanks to Drew for providing the excellent gaming facility and chili.  And thanks to the teams (DAK: Sean, Owen, Rhett, Gavin, Casey, and Keith.  UK: Mike, Drew, Lee, Richard, and Marcus) for superb game play and excellent refreshments.  I cannot overstate how cool it was to see a group gel like we did-that was a lot of fun.

I think we are onto a really fun format.  See you guys next month.
Posted by Unknown at 2:24 PM No comments:

Here's the latest round of models for the Tobruk 1941 game coming up.  I painted Warlord 4 Panzer IV models for the DAK team as well as a captured Warlord 222 models to go with the captured Italian tanks for the Aussie team.

They turned out OK.  Some of the weathering and rust is a little ham-handed.  Some of the dirt effects on the road wheels looks pretty good.  Overall, though, they should look respectable on the tabletop. 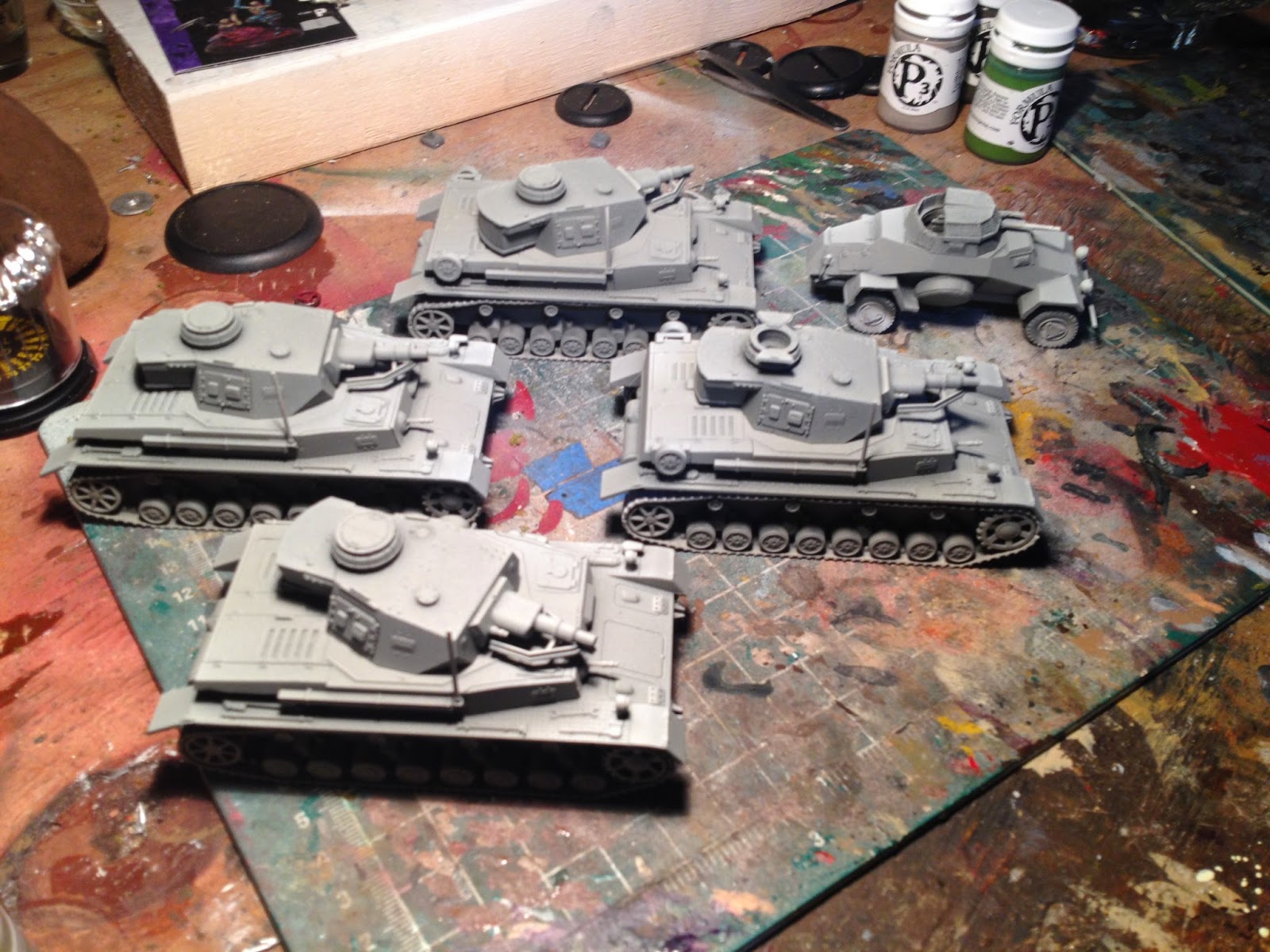 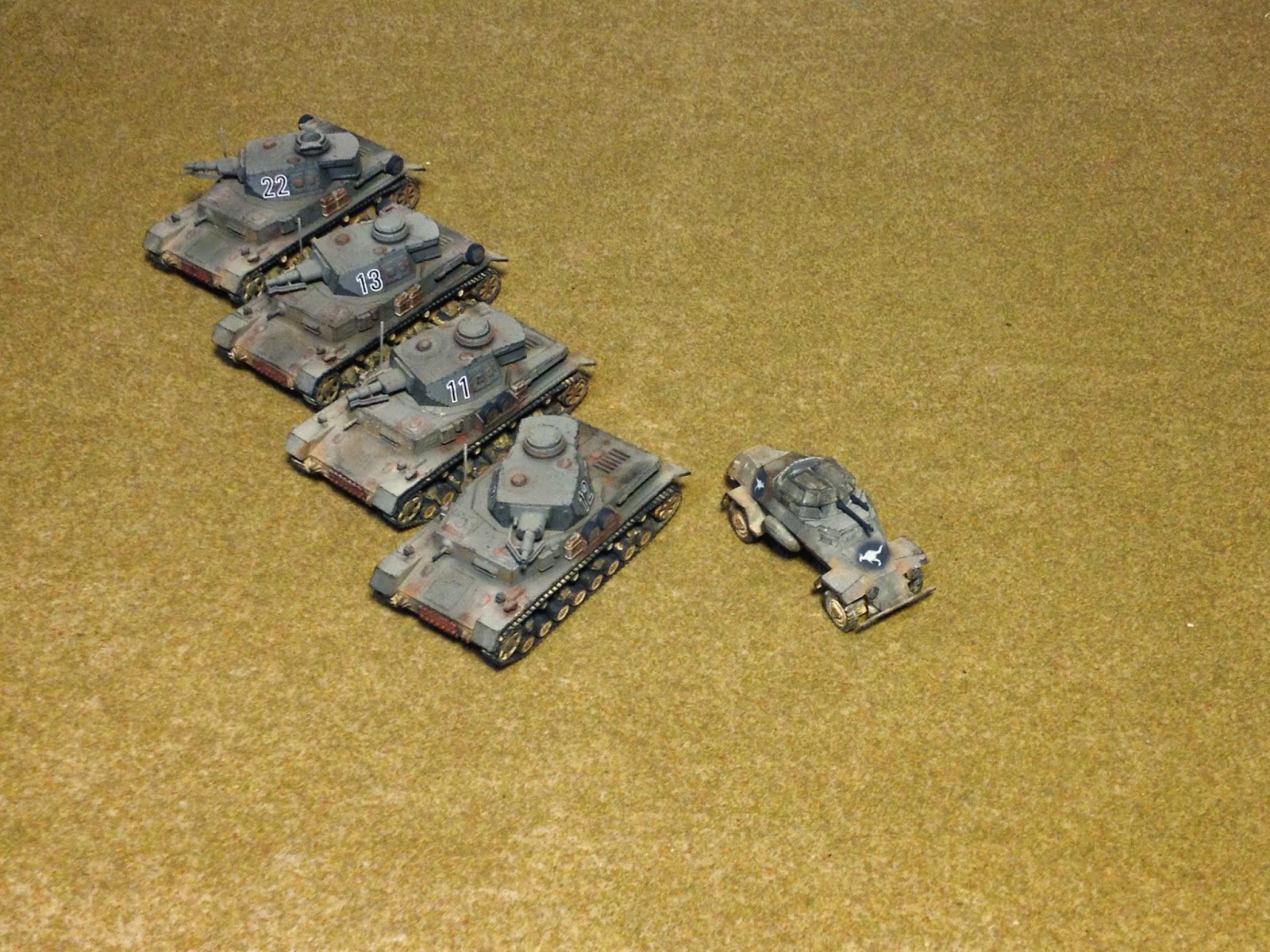 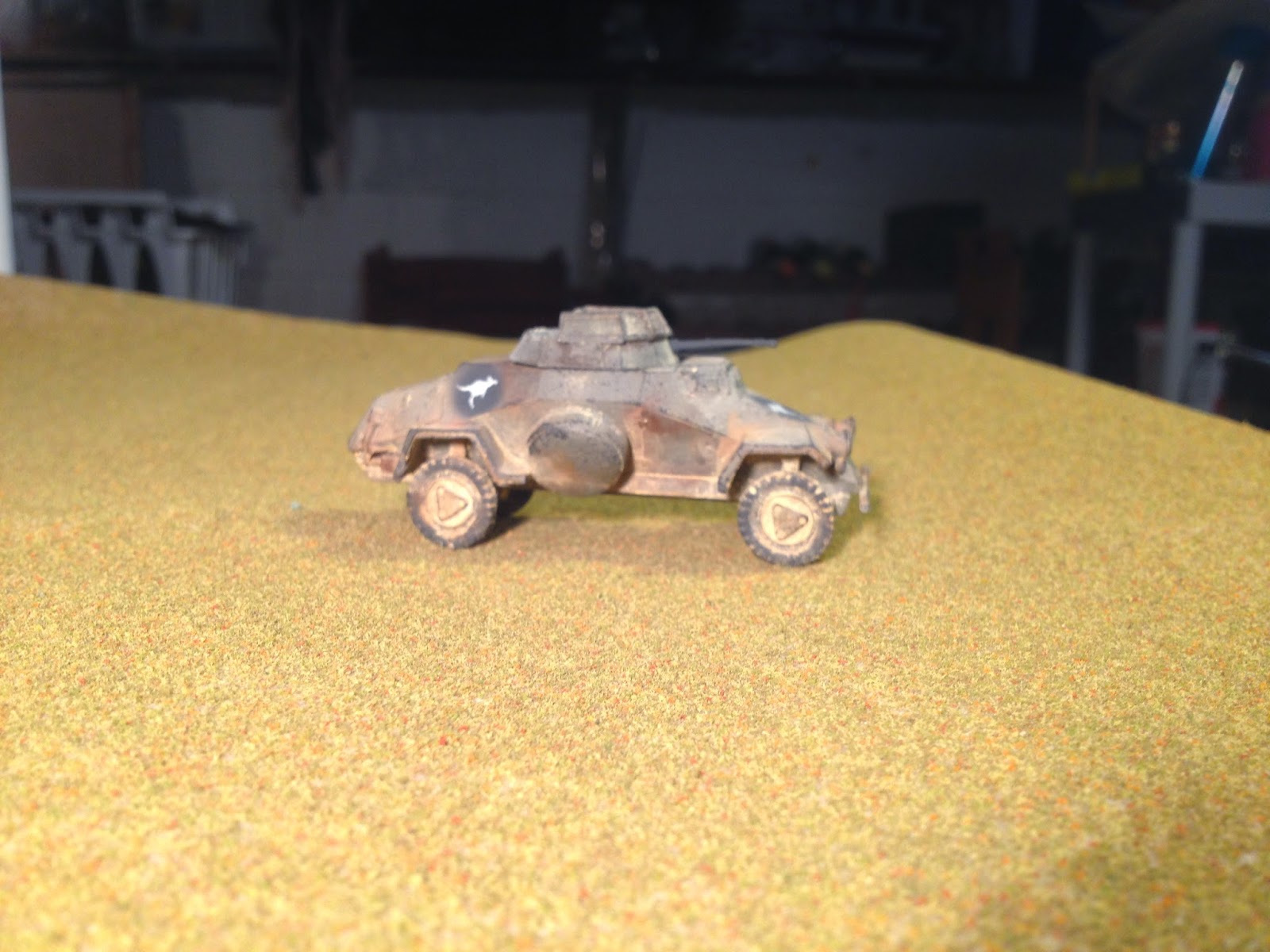 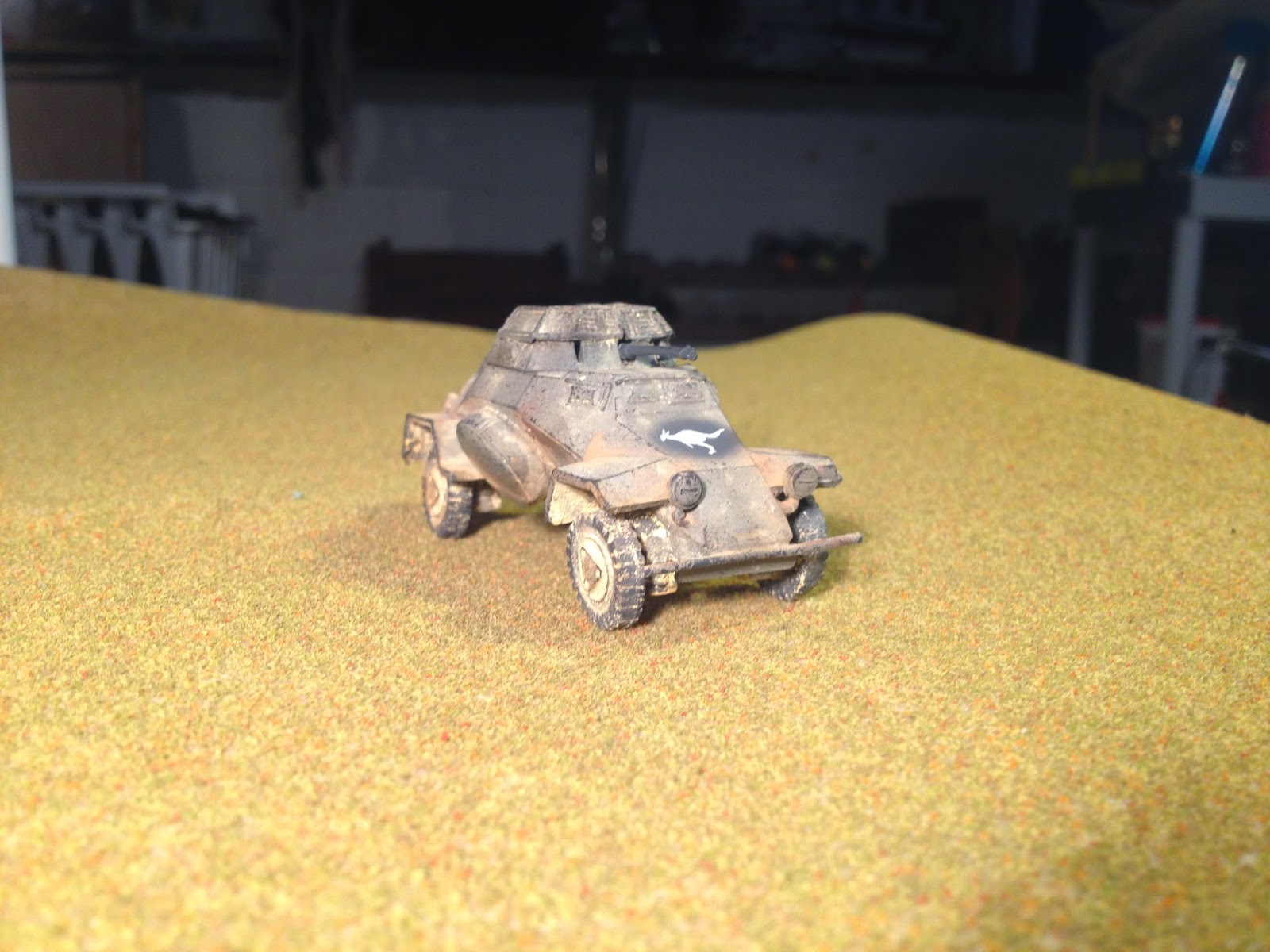 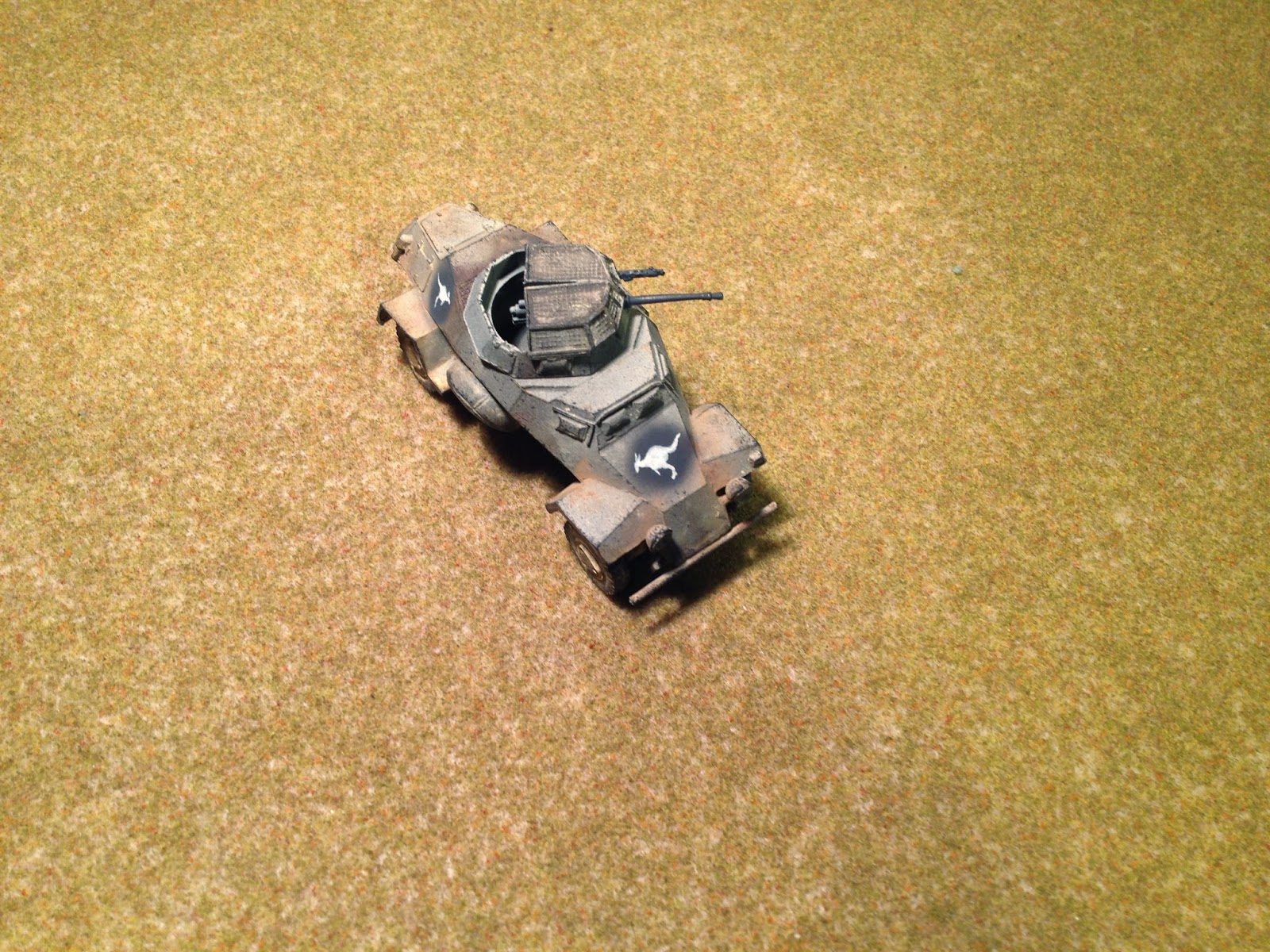 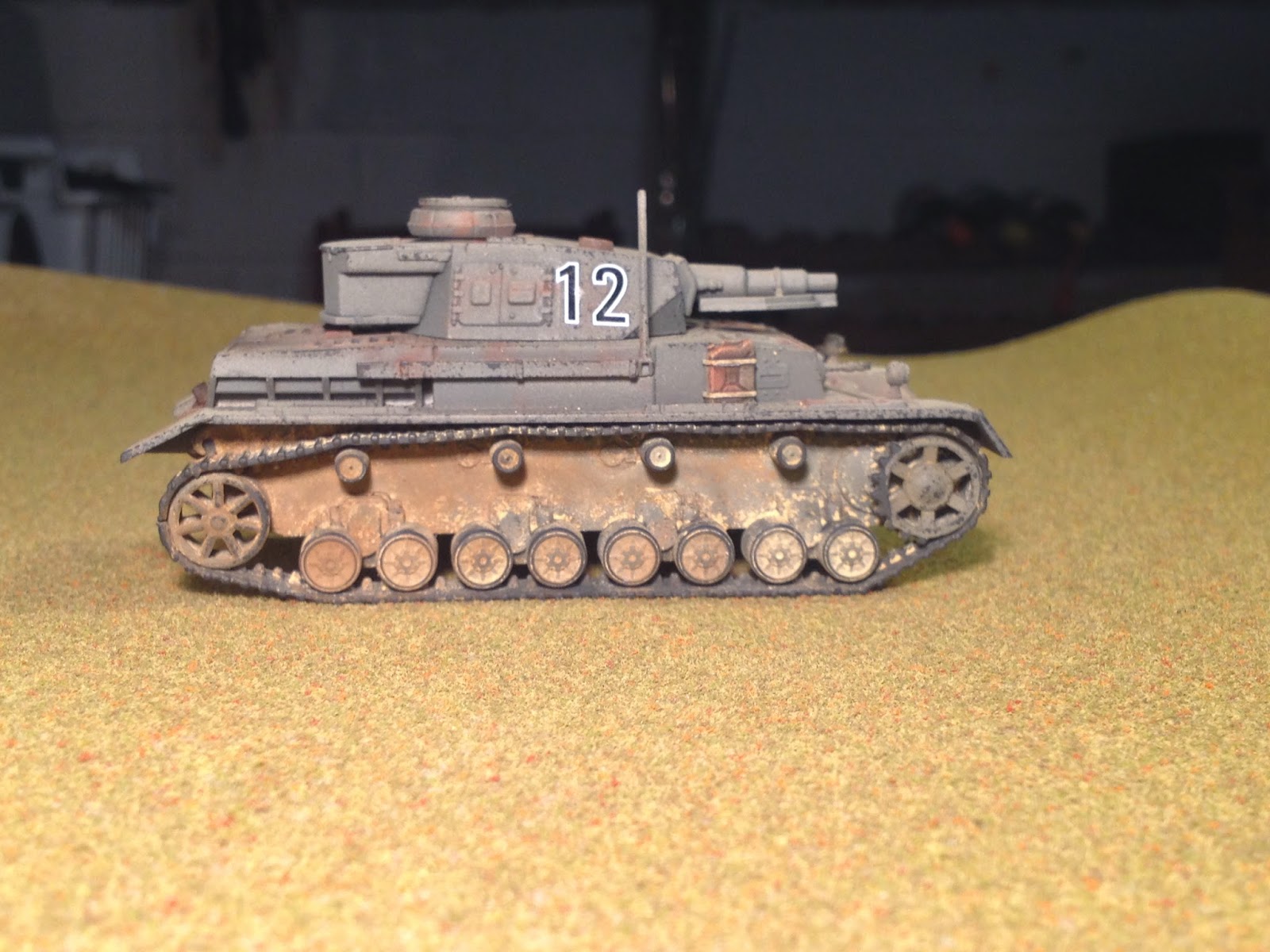 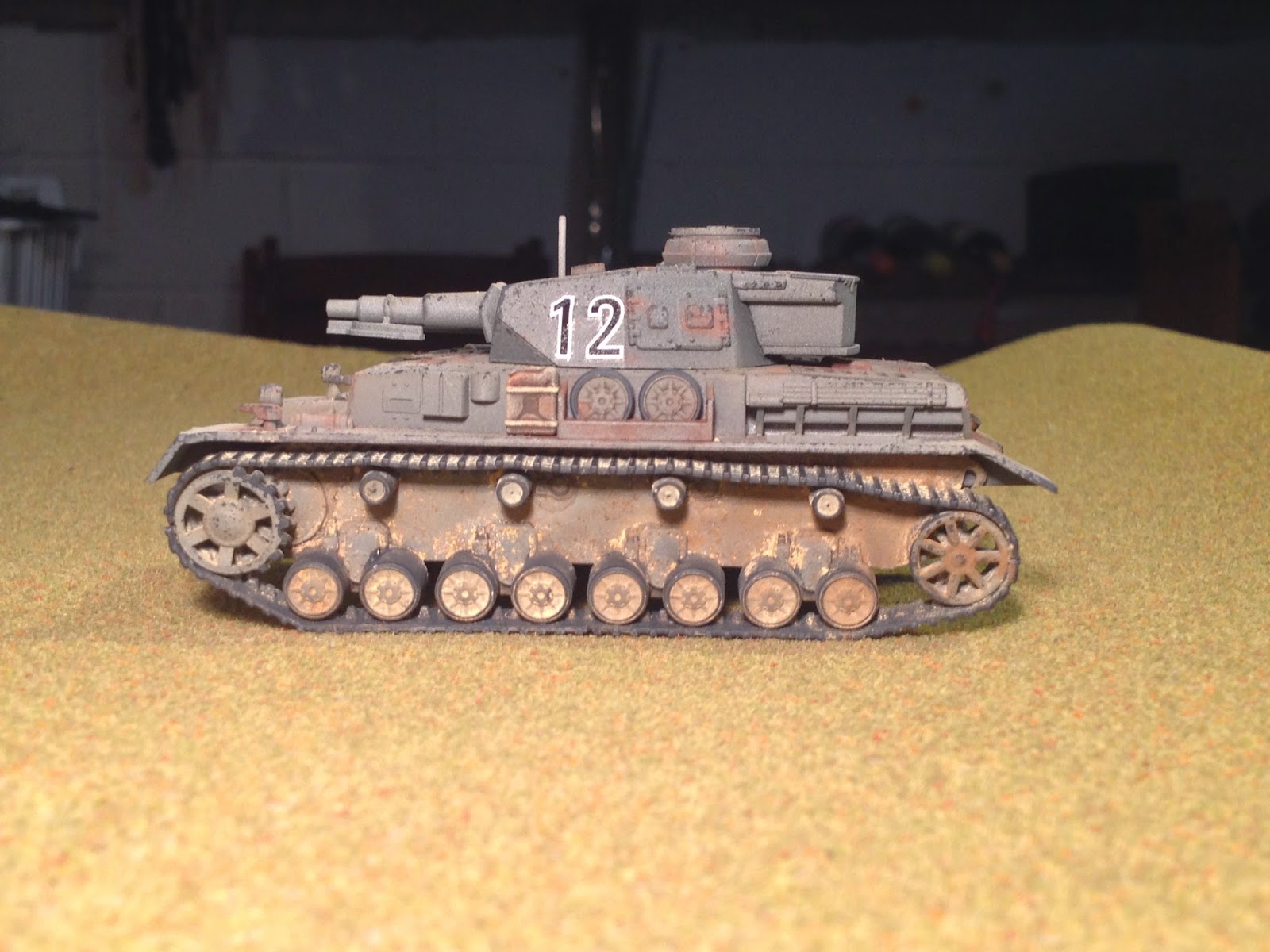 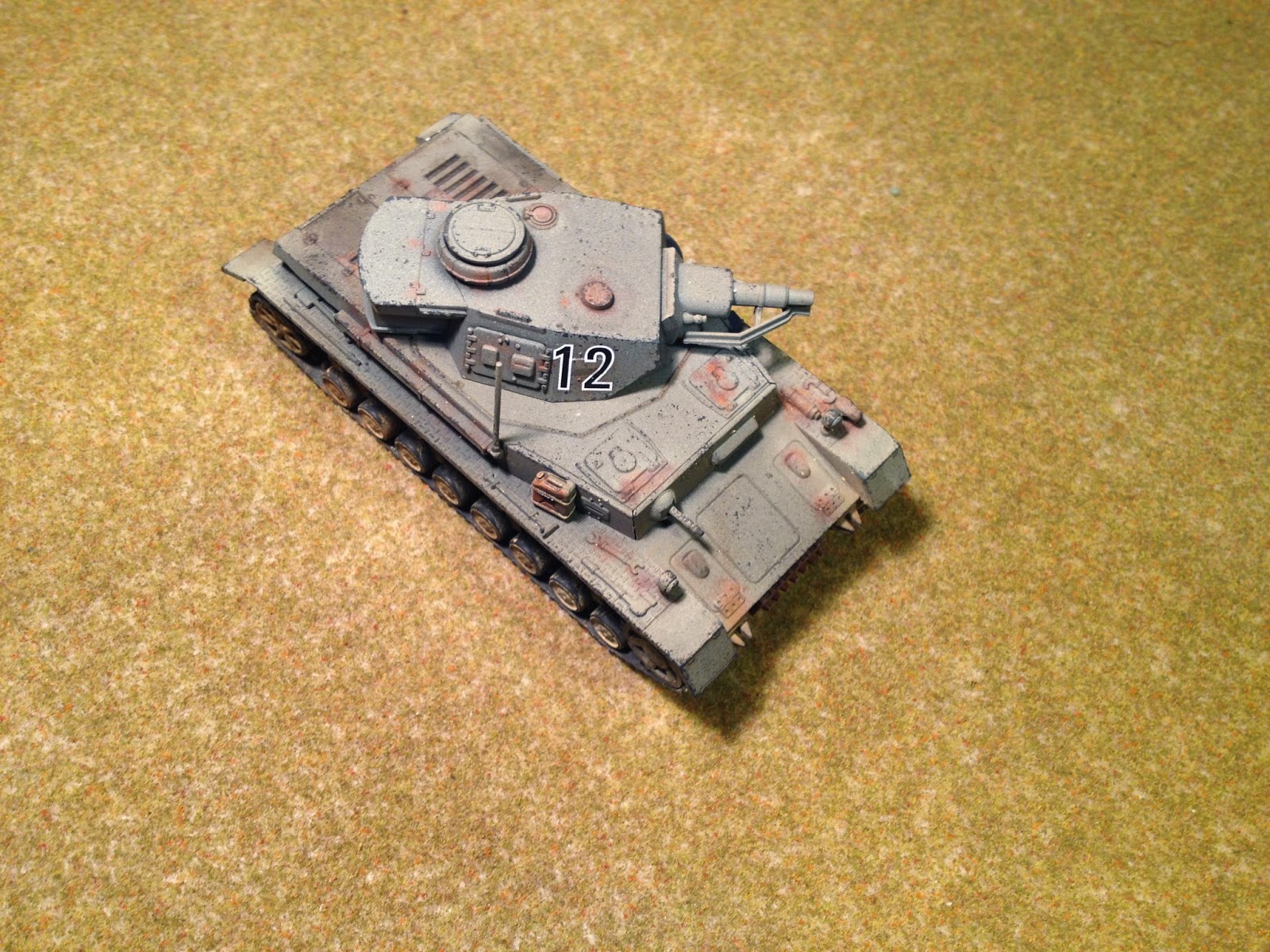 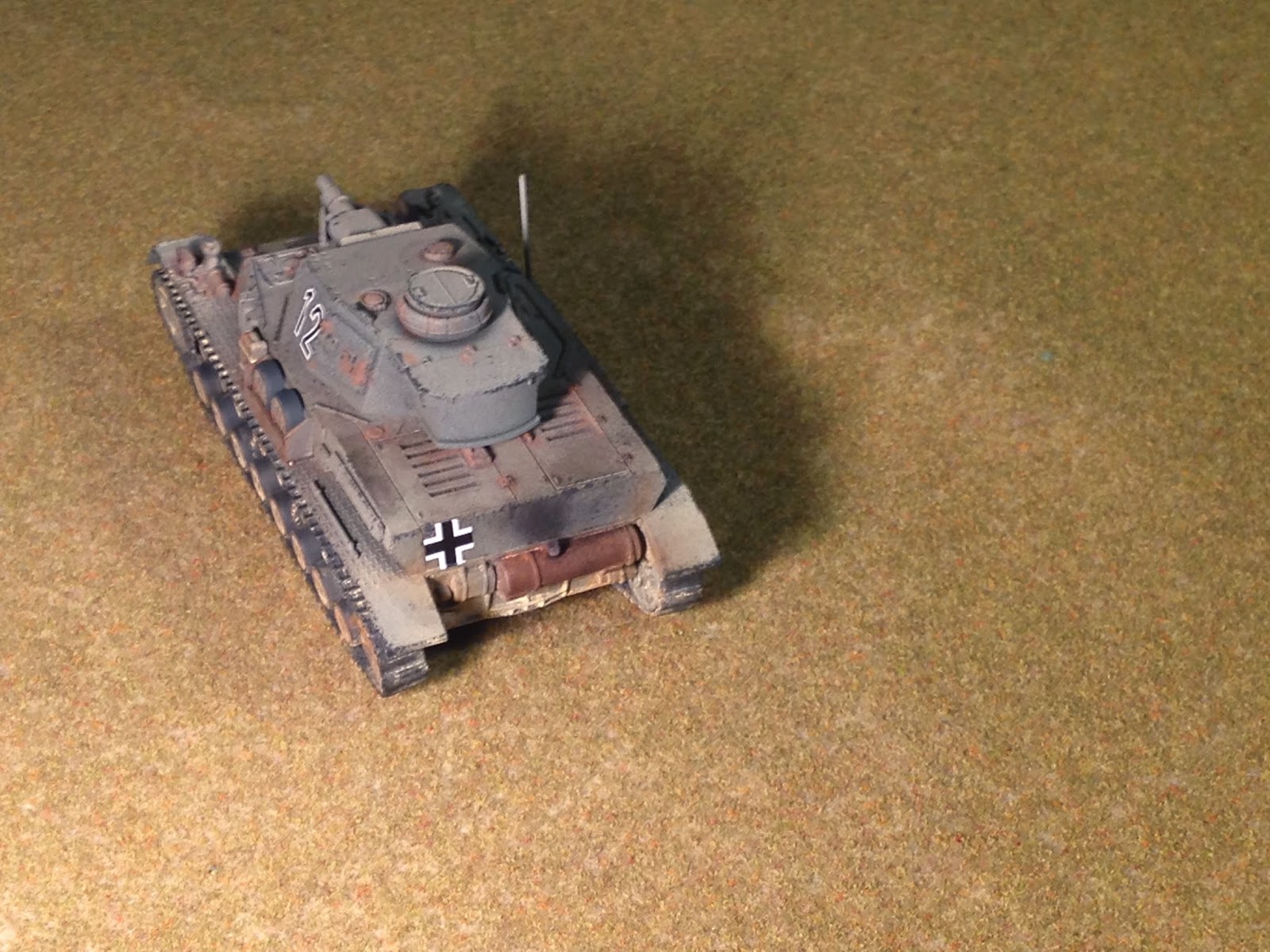 So I originally labeled these guys as the 28th Australia Infantry, when, in fact, they represent the 24th Australian Infantry.  My bad.  But that's the cool thing about developing historical game scenarios-you get to dive in depth into some of the most amazing tales of human conflict and learn how battles flowed at the tactical level.  I'm having a blast.

So these guys turned out really well and clocked-in at about 30 minutes per model from sprue to final touches on the bases.  Much credit to the fantastic Perry miniatures.  I'm pleased with the results and cannot wait to see them in action against John's most excellent Afrika Korps forces in two weeks.

Now I need to put together some captured Italian anti-tank guns with Australian crews... 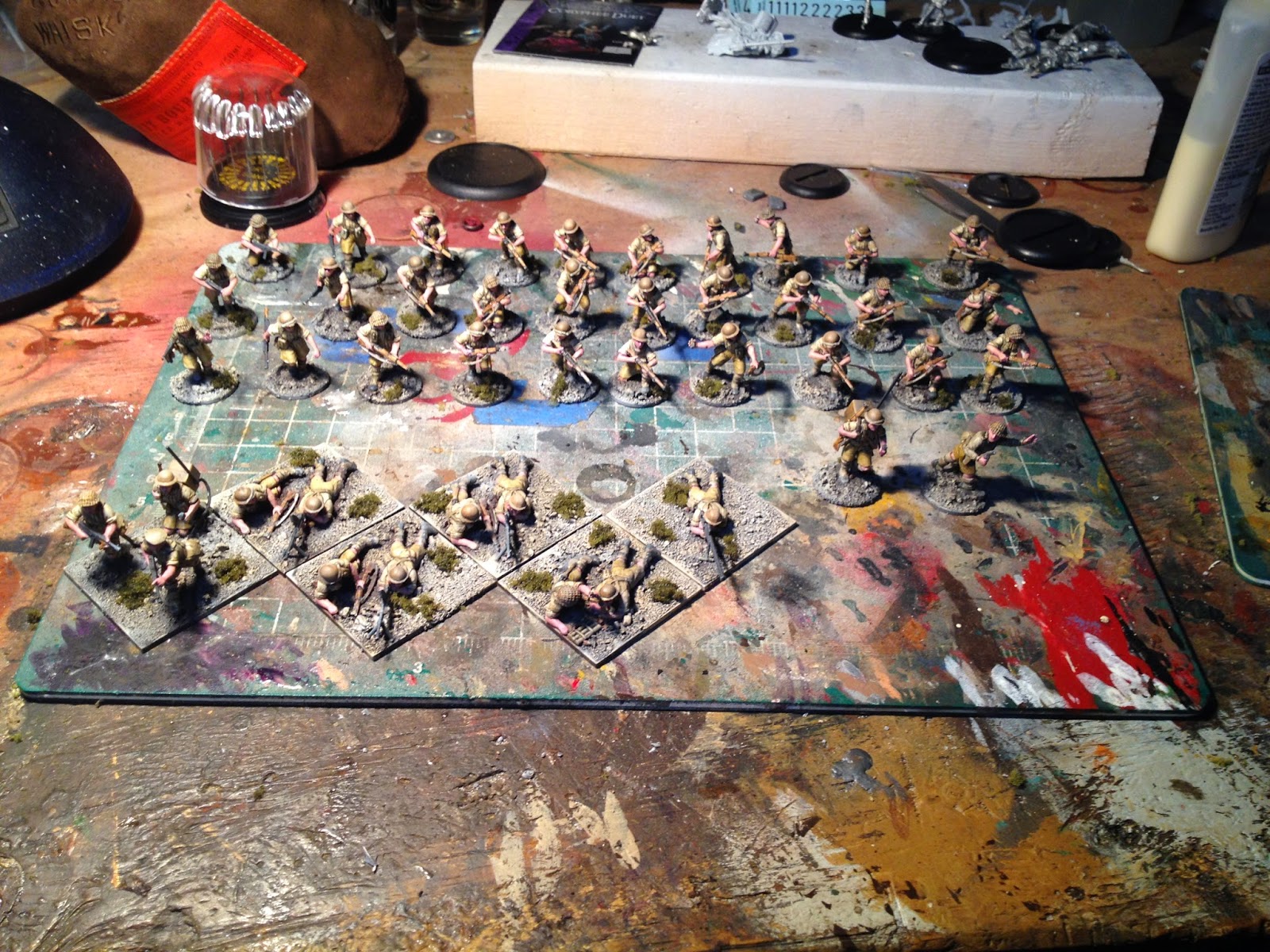 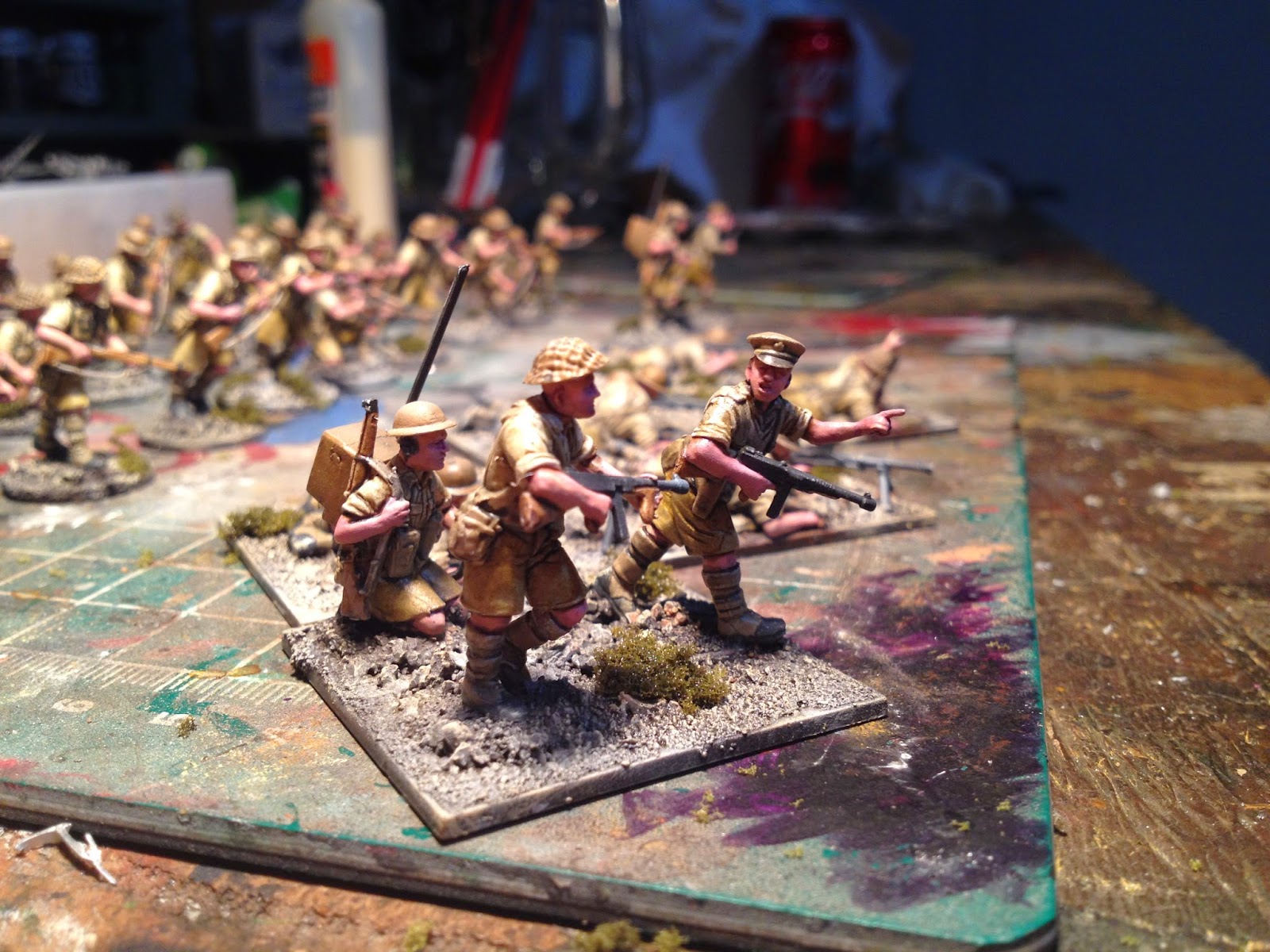 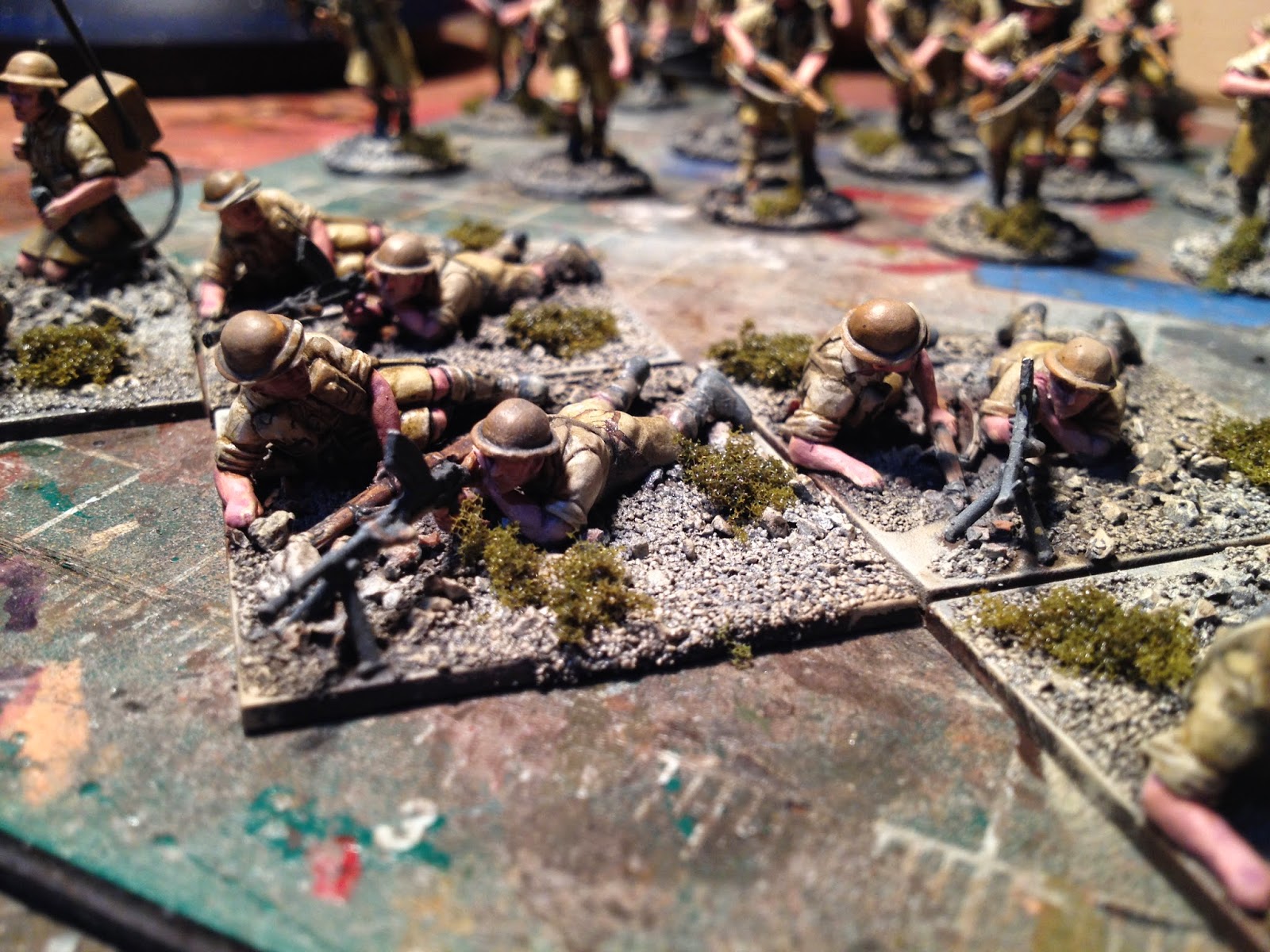 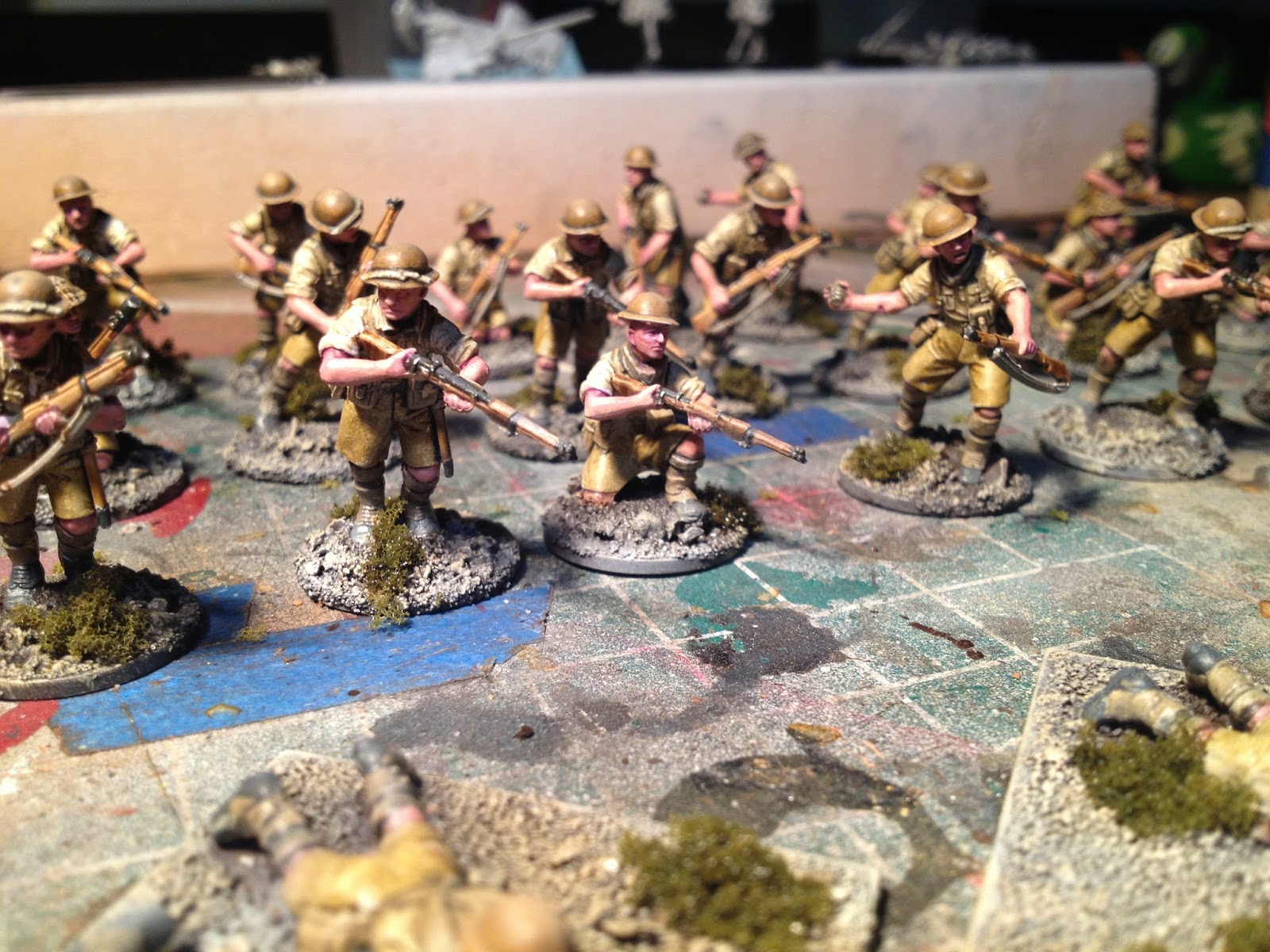