This being the 100th anniversary of the Easter Rising in Ireland, I thought I would make an Easter Rising game for Cold Wars.  I chose the Battle of Ashbourne.  A couple of key factors went into this decision.  First, it was a decisive Irish victory, so that makes it really attractive.  Secondly, and probably most importantly, the battle took place in a pretty rural setting, as opposed to the middle of Dublin, so the terrain challenge was not too steep.  Turns out that was a really good decision.

Last Summer I decided to go with Footsore Miniatures because they have a pretty decent line of Irish War of Independence miniatures.  The distributor and I ran into some challenges, and it took a really long time for me to get the minis, which was a little frustrating.  Fortunately, I got the minis a couple of weeks ago, so I'm all set, but with the compressed timeline I'm now up against the wall.  Thank the gods I don't have to build an urban board as well.


The forces for this game will be 44 Fingal Volunteers versus 28 RIC (actually 24 RIC and 4 British Regulars, because I just cannot run an IWI game without giving the Irish a chance to whack some Brits.)  The Volunteers will be regular troops and the RIC will be Veterans in an attempt to level the playing field. 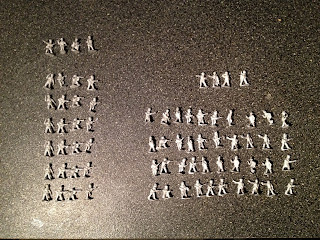 The minis are pretty neat, but they have a lot of flash and flaws, way too much for me to deal with in time for Cold Wars.  SO I took an exacto to them to remove the big flash and obvious chunks, but I didn't have time to really clean all the lines off the minis.  That's just the way it is this time around.

Then the humidity set in and I waited a week before I could prime the damn things.  Tick tock.

Finally having the minis primed, I developed a palette for the IRA that would make them look fairly uniformly earthy, yet give a slightly chaotic look to the forces.  The RIC, of course, will be pretty standardized in their green uniforms.

Here's how it looks after an afternoon.  Got a lot of the Volunteers basecoated using Secret Weapon washes.  I'm using a speed painting technique I developed painting Irish and Hiberno-Norse forces for Saga that is washes painted directly onto white primer.  I'm pretty happy with the way they are looking.  Not sure how to paint the hats.  All shades of black, or various colors? 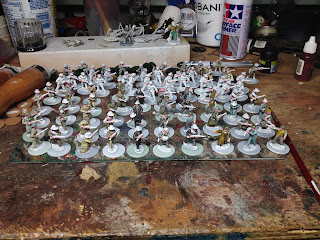 Any ideas?
Posted by Unknown at 8:51 PM No comments: