North Africa Wargaming Table Project Part 1: We Are Really Good at This

Not long after our gaming group's inaugural wargame, John and I set to work planning the next step in our North Africa WWII wargaming odyssey.  We wanted a coastal city so we could build a port and play with water effects (neither of us had done this in any significant volume before.)  We also needed it to be modular for ease of transport.  Our goal was a transportable table that offered flexible playing area while meeting the highest standards of appearance.  Being relative novices in the realm of high-end terrain construction, much of the project took us into uncharted waters, and we had many accidental triumphs that have become standard procedures, as well as many failures that can provide cautionary tales for those who follow us.  Did we succeed?  Read on and judge for yourself...

We kicked-around a couple of ideas and decided on four 3'x4' 1/4" plywood panels, because that's what I had in the basement.  This would give us a nice, big 6'x8' playing surface made of lightweight panels that fit into the trunk of my car.  I framed the panels with 1"x1" lumber to prevent them from warping.  The frame also allows us to clamp the panels together once finished.  I then topped the panels with pink foam and subsequently sculpted the foam using wire brushes to give us the topography were were after.  This is very messy-but I think the results are worth it.  Many thanks to my wife, Sacha, for generally putting up with the pink snowstorm in the basement. 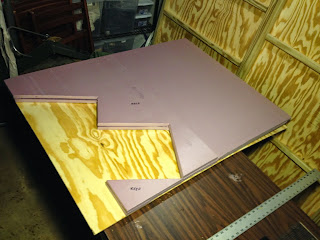 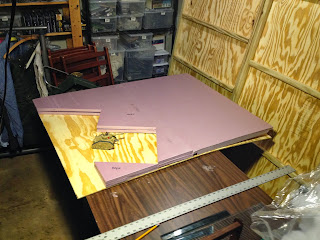 I needed some weights to hold the foam flush with the wood while the glue dried.  There is no problem that alcohol cannot solve.  Here are the two coastal panels side-by-side. 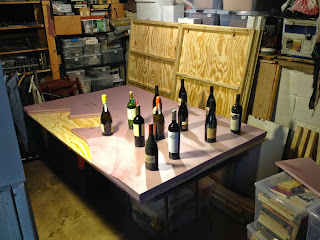 A close up of the beach area shaped using wire brush.  I used two brush sizes: 1.5" for bulk foam removal and a .5" brush for finer details.  I would also recommend lightly roughing the entire surface of the foam (not just the shaped contours) using a wire brush to give the plaster (see below) a stronger bond with the foam.  I did not do that for this project, and the plaster tends to break off a little too easily from the smooth, unshaped foam surfaces. 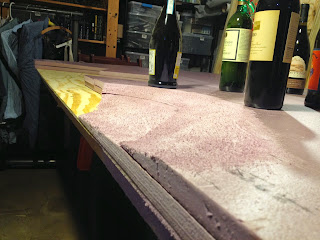 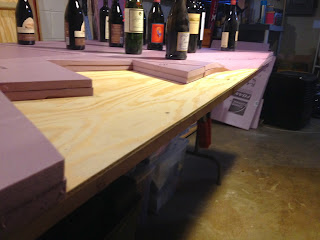 In addition to the port, we wanted an escarpment to give us some high ground.  Here you can see the two escarpment panels taking shape. 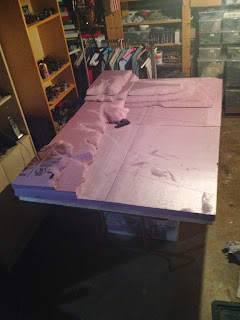 I didn't like the boxy look of the highest hill (above), so I carved a road into the ridge line and cut a road defile into the highest ground to break-up the square edges a little.  The lesson learned here is to cut your foam in the shape you want to avoid straight lines.  That may be obvious to you all, but I needed to make the mistake in order to understand it.  Lots of that going on in this project, as you will see. 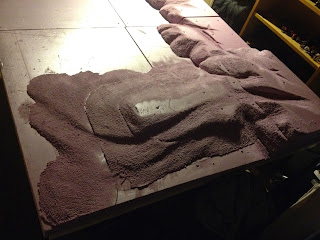 Speaking of lessons, here was my first big one.  Glue is important.  Use the right glue for the right job.  Wood glue worked great for binding the foam to the wood panels, but was not the best for binding foam to foam.  The bond is pretty brittle and the foam slabs started to separate as I moved the panels around.  Tacky glue retains some flex and bonds better to foam than wood glue, so use that instead.  Also, a corollary to the Tacky Glue law is using screws to hold the foam together while the glue dries.  This prevents any "drift" while the glue forms a permanent bond and ensures that the foam slabs do not separate while the glue dries.  Above and below you can see dots where I used sheet rock screws in the foam.  When you do this, be sure to countersink the screws so the heads are flush or below the level of the foam, but be careful not to over-rotate the screws and strip the holes.  You need the threads to remain engaged with the foam. 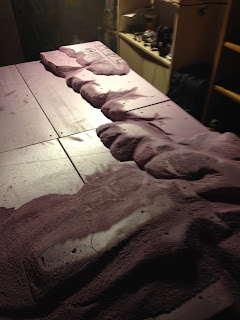 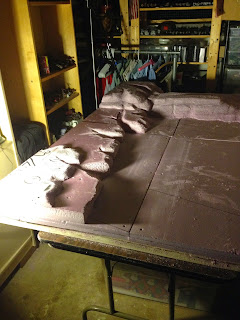 So the table was all foamed and carved and glued and screwed and ready for finishing.  We decided to use plaster and pigment to coat the table.  The weather was perfect so we were able to move the project outside.  I cannot recommend doing what happened next inside-working with the plaster and pigment was extremely messy.  We fiddled around with mixture levels, mixing different ratios of plaster, sand, water, and pigment until we got the consistency we wanted.  The base layer that worked best for us was 10 Tablespoons of plaster, 10 Tablespoons of sand, 1 Tablespoon of pigment, and 15 tablespoons of water.  This starts out pretty runny, but thickens quickly.  You have about 3 minutes to work with it until it is no longer spreadable.  While it is still wet, you can use a cloth (or gloved hands) to smooth out any brush/trowel marks.  Sanding the surface after it dries is an option, but you will probably want to re-surface the sanded bits again with plaster.  Kind of depends on what you are after.  For our desert terrain we liked the rough texture of the plaster/sand mixture. 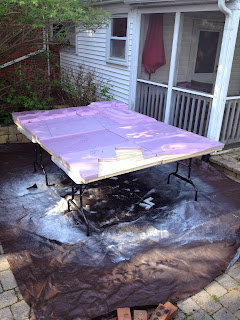 Once we got the surface on, John did a little bit of highlighting and road making with pigments, and, Viola! 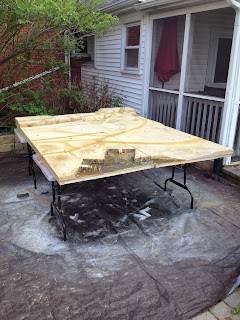 Ok, there was a bit more to it than that.  I wish I would have taken more (any!) pictures of the finishing work, but dealing with the plaster is a pretty frantic experience.  Once you start mixing it, you just have to go all-out until you have finished coating the panels.  Before we knew what had happened, 8 hours had passed and we had a gaming table.

We started by plastering 2" tall bands of cast rock (Merlin's Magic) around the edges of the port and then sinking dowels into the sea floor to use as pilings.  Everything got a layer of plaster coating (though we left a good bit of the cast rock sheets exposed.)  John finished off the port area by cutting balsa wood planks to make the docks/wharf and added a couple of collapsed piers to complete the job.  He then used a light pigment on all the horizontal desert surfaces, which offset them nicely from the darker base pigment in the plaster.  Next he sketched-out the roads using dark pigment with light borders.  Finally, before we poured the water effects, John used dark brown and green pigment to shade the bottom of the port area.  The initial results were pretty neat. 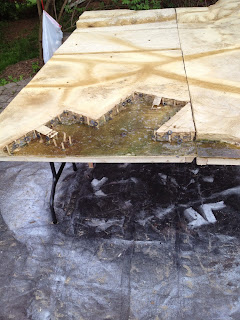 Our initial pour of water effects was limited to what we had on-hand, and we realized that we would need to pour more at a later date.  We were pretty happy with the way the water effects combined with the pigments-good depth illusion due to the dark pigment around the edges.  John also cast a bunch of tires for use as pier bumpers.  These, plus chains, ropes, and other port detritus are scattered around on the seafloor.  The yellow tint of the EZ Water combined with the brown and green pigment to make the water look very polluted.  The overall effect gave the impression of a derelict port in the developing world.  Exactly what we were shooting for. 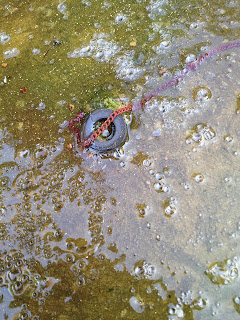 The pilings were lengths of dowel cut and coated with the plaster mix to make them heat resistant (this is important for any project in which you use heat and pour water effects.) 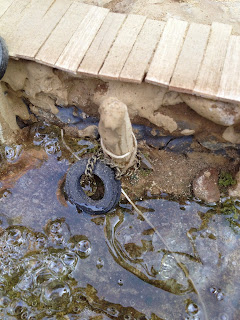 Sea vegetation--Woodland Scenic foam submerged in EZ Water.  You can also see some of the "cake icing effect" caused by the plaster drying before we could contour and texture it.  Once this happens, your only recourse is to chip it into something you like.  Doable, but a little tricky with water effect so near. 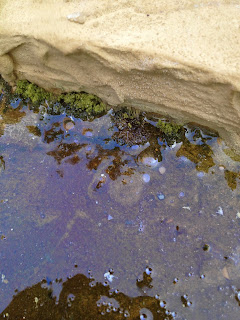 Some scattered brush here and there. 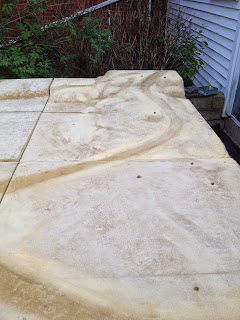 And there you have it--a fully functional table with some tanks sprinkled around for effect. 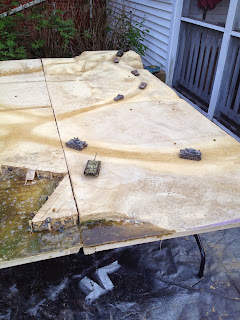 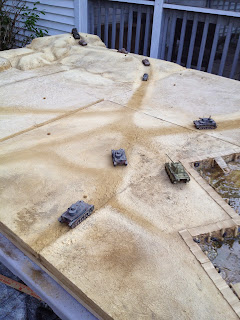 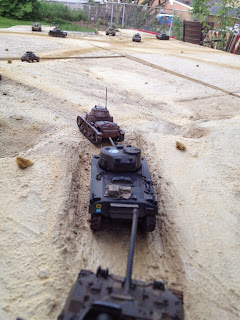 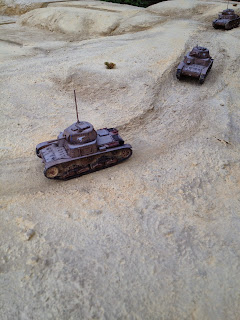 The table was beautiful.  The tanks looked great on it.  We were thrilled.

But we weren't done yet.  Not even close.

Read what happens next when I get ta thinkin'
Posted by Unknown at 1:27 PM No comments: