I'm starting work on my Bolt Action models with the hope that I can get some of the guys together for a demo game in a couple of weeks.  I have been talking up the game in a big way, so I am excited to get some models on the tabletop.

I started with German infantry.  After cleaning and assembling the models, I primed them using P3 white spray primer.  I can say that this is the best spray primer I have used so far. 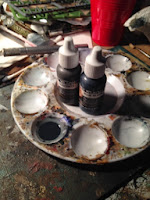 Because these will be late war Germans, I wanted to ensure that I got the right shade for their uniforms.  Late war German field grey uniforms generally had a more brownish appearance than the blue grey uniforms of the early war period.  To capture this I mixed 1.5 parts Secret Weapon Blue Black Wash with 1 part Secret Weapon Concrete Wash and painted the uniforms with the wash mix. 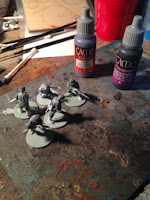 The next step was to apply a black oil wash over the base coat uniform.  I prefer oil washes to acrylic washes because the capillary action seems more even (acrylic washes succumb to gravity more than oils) and pooling is easier to clean up.  Here is how the technique works: I put a dime-sized dollop of Rembrandt Ivory Black paint in the bottom of a shot glass and thin it with about an ounce of mineral spirits.  It takes a lot of stirring to dissolve the paint in the thinner-several minutes-so make sure you get all the lumps of paint out.  I then put another splash of thinner in a second shot glass.  I wash the basecoat and then use a paintbrush or q-tip dipped in the clean thinner to clean the pooling wash off high points (and any other places I don't want it). The result is more even blacklining, less gross pooling in low spots, and subtle shading. 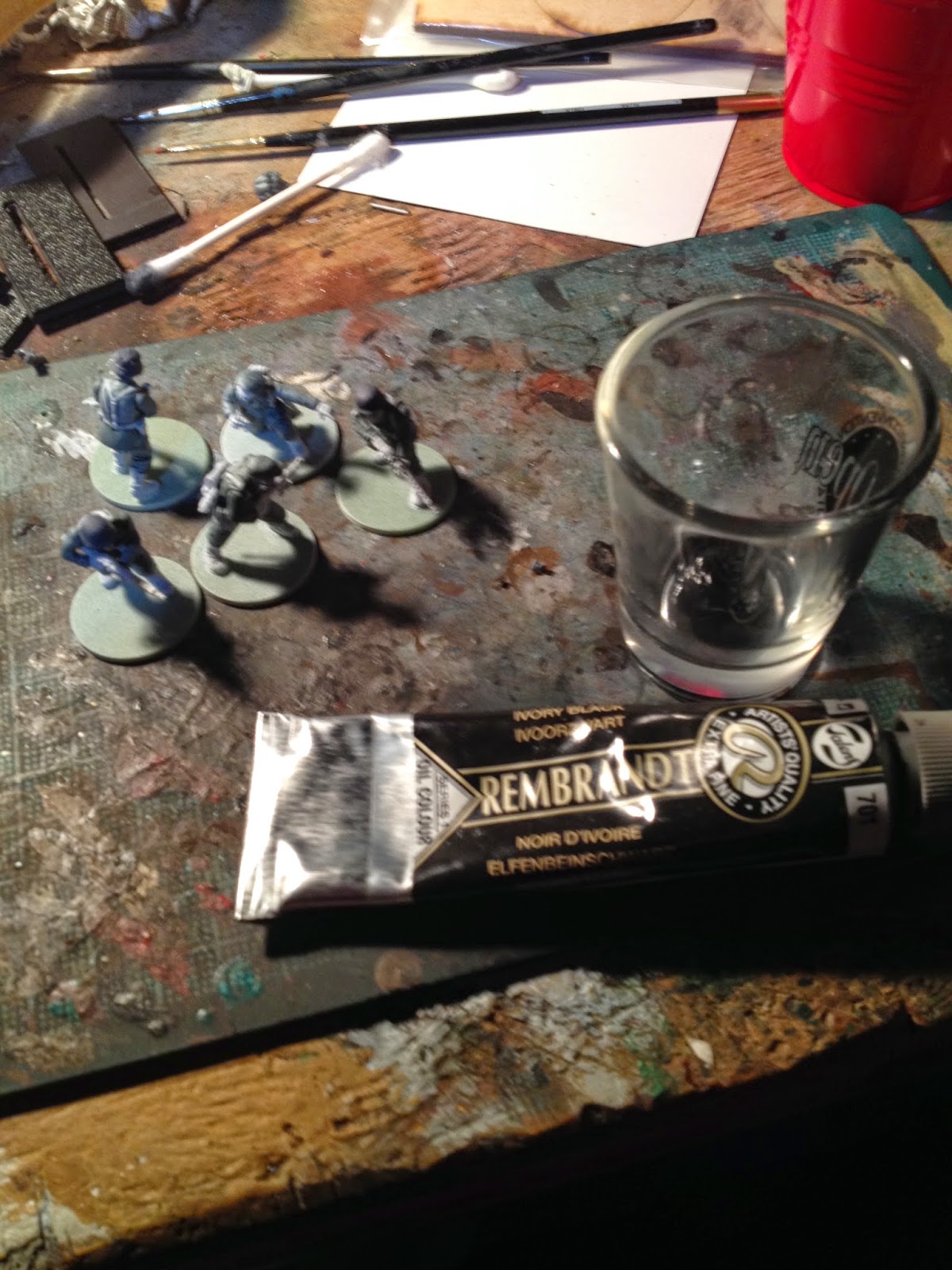 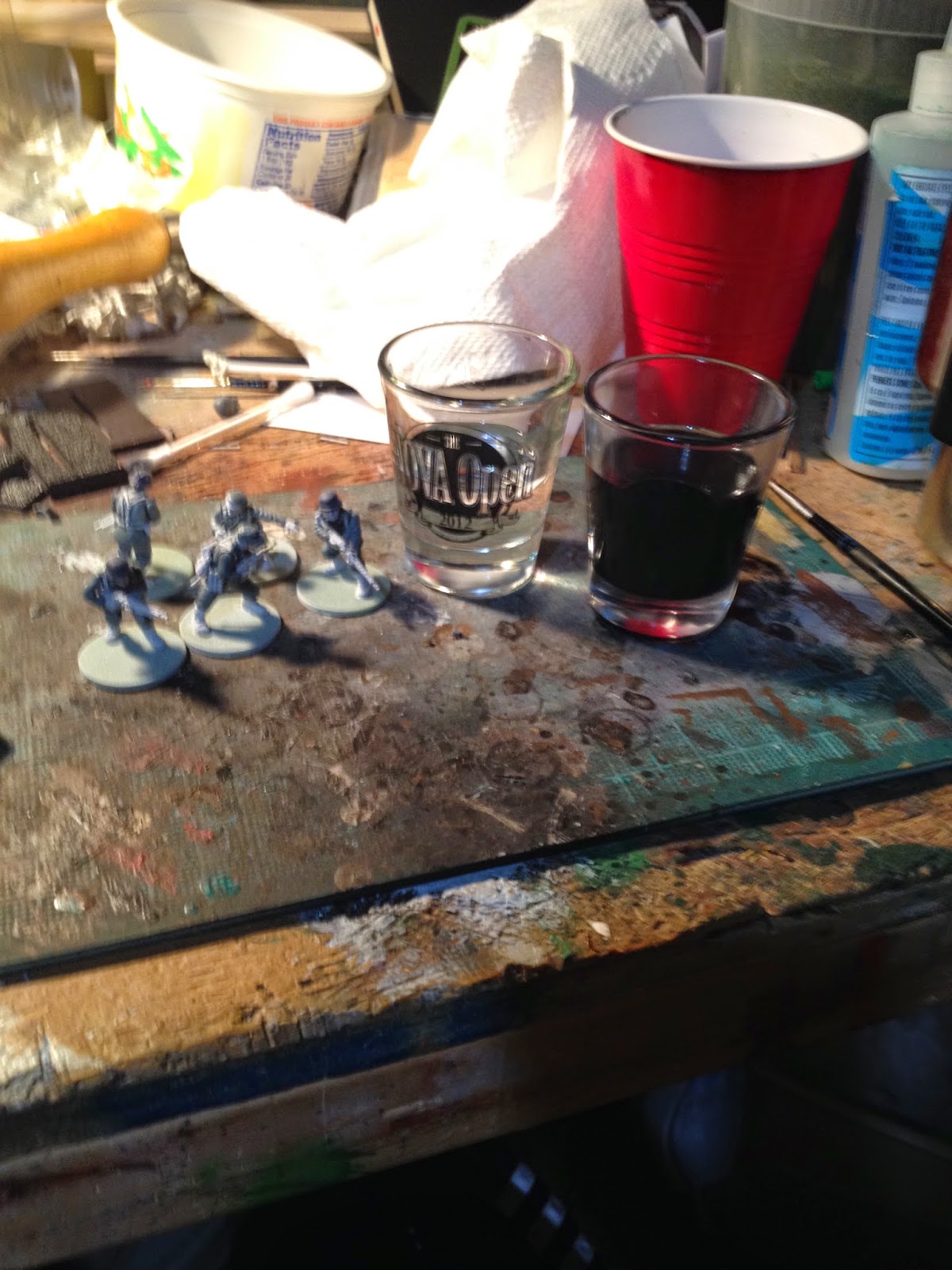 Except things didn't go so well this time.  I have used this technique before to good effect, but this time things went wrong.  When I applied the wash, it became clear that the acrylic was was either not completely dry, or did not completely bond with or cover the enamel primer.  The thinner started to dissolve the primer, causing a faint milkiness to seep through the basecoat in a couple of places.  I wasn't too concerned about this, as these are army pieces, not show pieces, and I hoped that the milky wash would darken and blend with the field gray/black wash as it dried.  I finished washing the models, being careful to dab the wash onto the surface (instead of painting the wash across the surface) and then then turned to the clear thinner to clean up the high points.  Here's how things looked at this point: 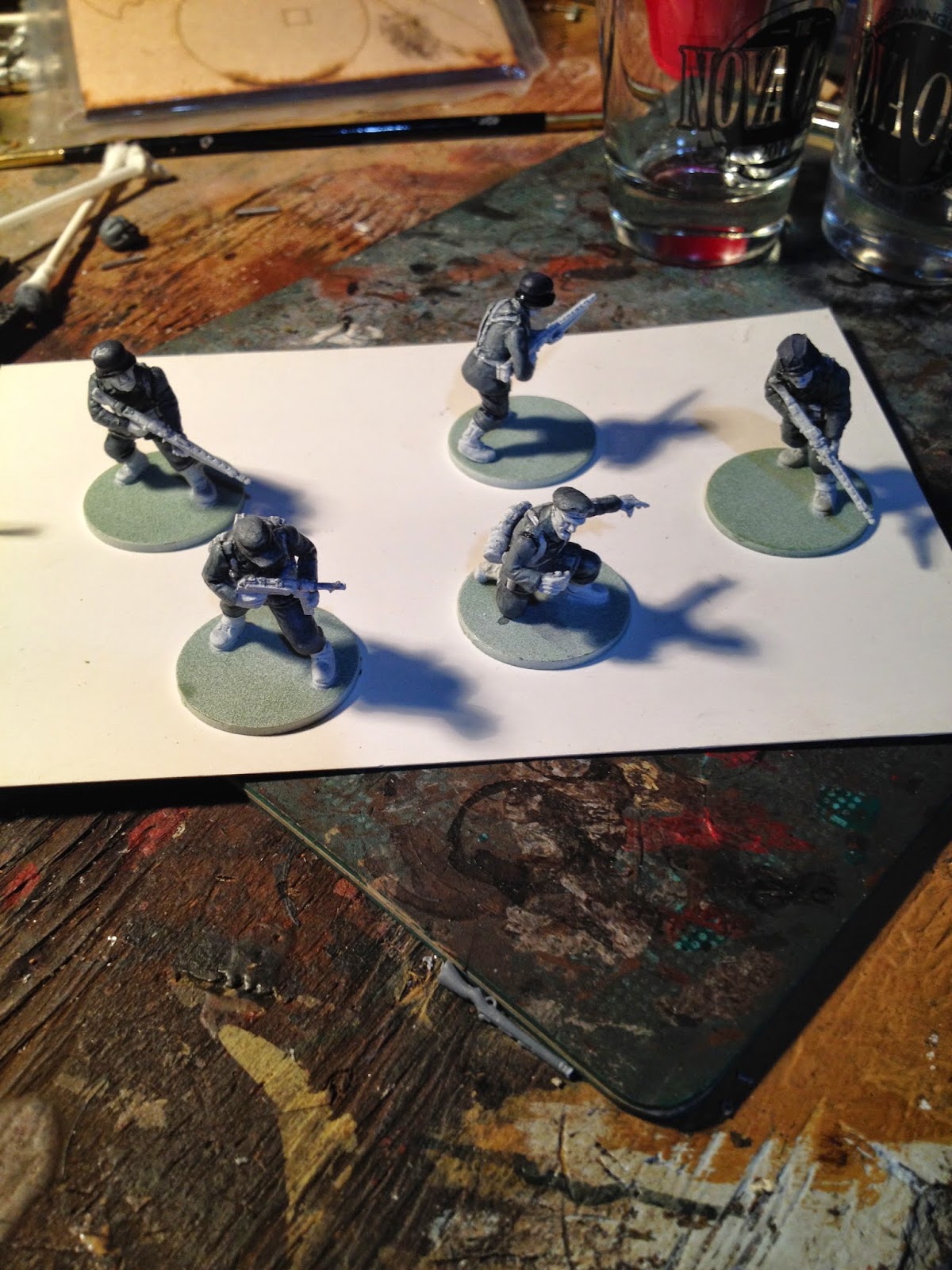 I should have anticipated the ensuing catastrophe.  I'm sure you astute artists out there already know what I am about to write.

Because the thinner had already started to soften the primer underneath the basecoat, the first time I swiped the brush loaded with clean thinner across a model, it took the primer and basecoat off with it.  You can see my handiwork in the picture below.  The model in the upper left has a huge gouge in the top of his helmet, while the model on the lower right has lost a large chunk of paint from the top of his outstretched arm. The model on the upper right shows some of the primer bleeding through the basecoat of his tunic on his left hip. 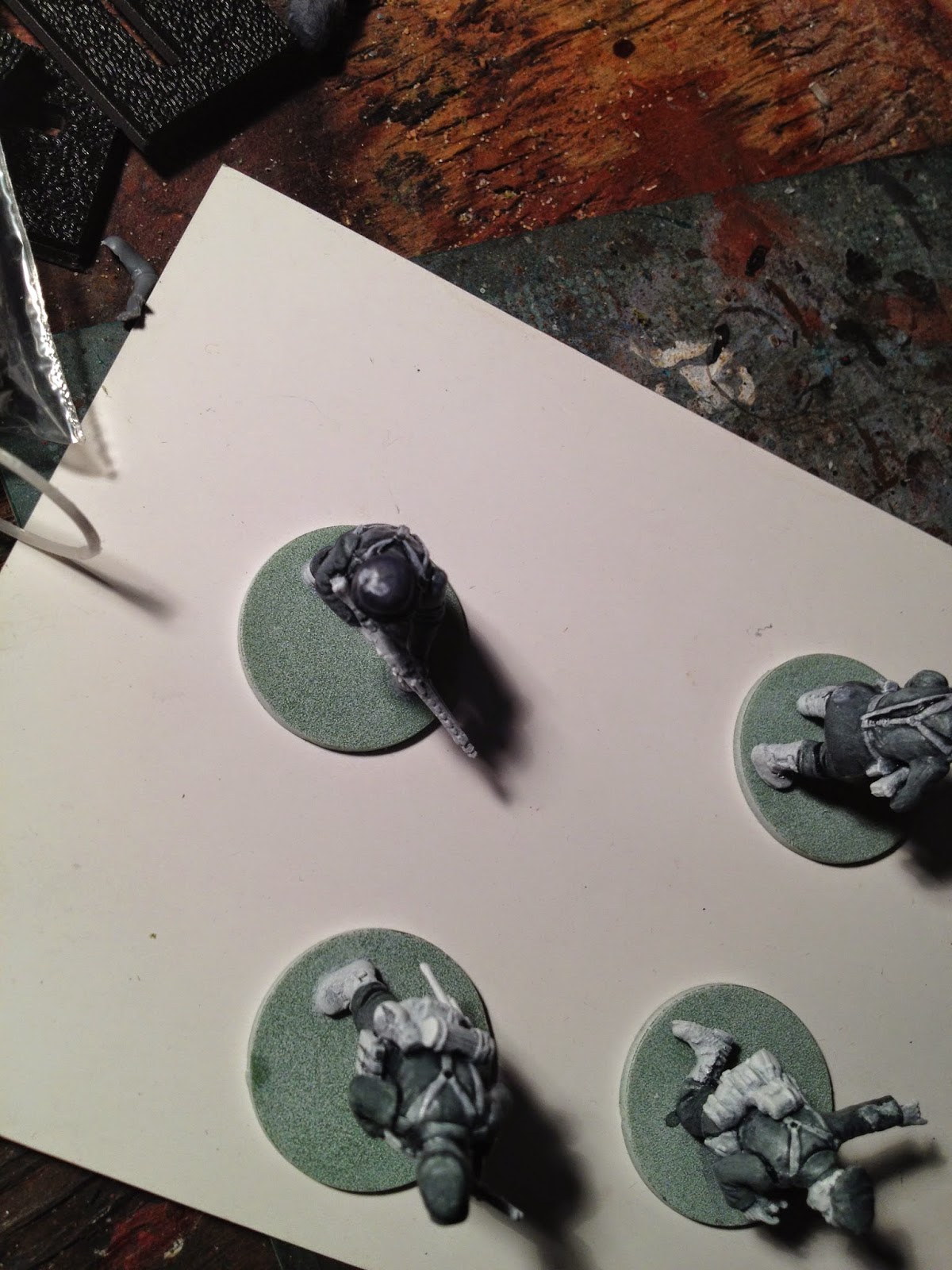 Brushes down.  Walk away.  Take stock.  Make a recovery plan.  Prevent a repeat.

I have used this technique before, but with acrylic paint, not washes.  That said, I painted the helmets with paint, and they were affected just like the basecoat of wash.  The one thing that is different this time is that I only waited about an hour (maybe less) between applying the basecoats and then the oil wash.  When I have used this technique in the past, I have adhered to my hard and fast rule of waiting 24 hours for an acrylic layer to bond and dry fully before painting any effects over the top.  This time, I am speculating that the acrylic had not bonded to the enamel primer, allowing the thinner to seep through and dissolve the primer.  For the next batch of soldiers, I will repeat the process with a full day between acrylic basecoat and oil wash.

As for repairing the damage to these guys, I will try to remove the basecoat and primer from the affected areas (helmet and arm) and then re-paint them.  If the milky areas don't blend I will probably just reapply a field gray wash over them to darken them sufficiently so that they won't stand out in a crowd.

I'll let you know how it goes.