It was all so magical at the beginning.

In a single day John and I had transformed four panels of wood and pink foam into a very high-quality 1941-1942 Libyan port for North Africa wargame scenarios.  When we parted ways that evening we were both riding high on the knowledge that we were Gods of Wargaming Terrain.  Then I started tinkering with things, and before too long I had a Magicians Apprentice kind of thing going on where my "improvements" to the table started to get away from me.

Then things got worse, much worse, but not right away.  In fact for a while things were going pretty dang well.

I came home from work to find my order of EZ Water Heat and Pour on the front porch, so I headed inside to finish up the waterfront.

I built a containment dam, painted up a sewer pipe, and heavily stippled/sprinkled a bunch of pigment (dark brown, green, and yellow) on top of the existing EZ Water to look like sewage discharge.  Prior to that, though, I had given all the pilings a liberal wash of heavily thinned oil paint.  This process had left a few "pools" of thinned black pigment to dry around the bases of several of the pilings.  I decided to leave them there and see what the second layer of EZ Water would do when it hit these "oil slicks."


Here you can see the sewer discharge dry pigment on top of the first water effect pour.  You can also see the containment dam, which is a Home Depot yardstick wrapped in aluminum foil. 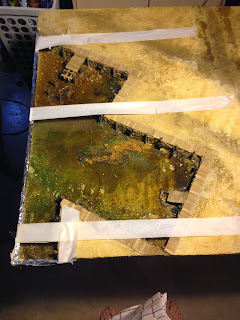 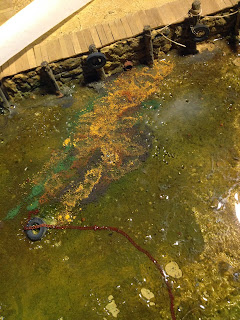 Having recovered emotionally from my earlier caulking disaster, I felt pretty confident about this pour.  And I was right.  When I poured the molten resin into the harbor, some of the pigments glopped together to form solid chunks of skunge suspended in the resin.  Other chunks rose to the top where I used a toothpick to spread them out to create the effect of murk flowing along with the tide. 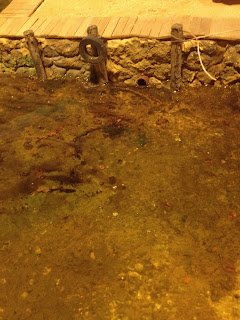 The oil effects left over from staining the pilings worked perfectly.  Well beyond my expectations.  This will be a go-to move for me in the future. 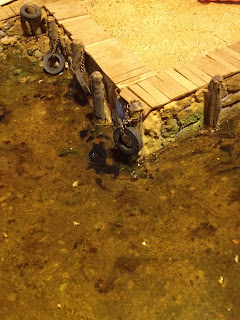 The pour did not quite cover the tire in the center.  I think we need a third pour, but I will wait until John sees it, assuming the table is still intact when he finally sees what I have been doing to it.  You can see the suspended sewage and murk pretty well in this shot. 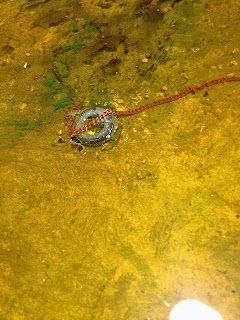 Here is the sewer pipe with the many layers of suspended grossness in the water.  It's so awesome! 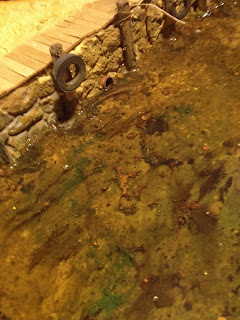 One of the keys to producing a nice even water pour was my new heat gun (AKA Heat Fun!)

I had the pour pan in one hand and Heat Fun in the other, and was able to melt bubbles quickly to produce a smooth water surface and even some wave swells.  In another instance of accidental brilliance, I was "fixing" a mass of boiling bubbles caused by pouring molten resin over acrylic gloss coat when I realized that the bubbles were perfect to represent the boiling surf where the beach meets the water.  I was able to stop Heat Fun before I obliterated the surf foam completely, but not before I had reduced the number of bubbles significantly.  Still, it looks OK, as you can see below. 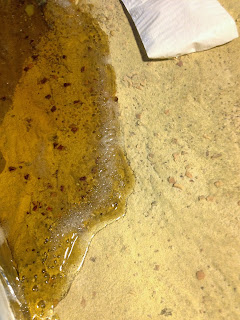 I will definitely use the hot resin over acrylic effect for foamy surf in the future.  Might even see what happens with tinted acrylics.

OK, I know you've been waiting patiently for the other shoe to drop, so...

Heat Fun is really good at its job.  It can crank-out a continuous blast of 1350-degree Fahrenheit air when I need it to.  One of the problems I ran into on the secondary pour for the EZ Water on the harbor panel was a major leak along edge where the containment dam met the first layer of water effect.  Because this is an irregular edge, the molten resin flowed through the tiny gaps onto the tabletop and the water did not end up as deep as I wanted it.

In order to avoid a repeat on the second layer of water for the beach panel, I decided to build the containment dam and then melt a handful of resin pellets along the edge of the dam, then let them cool to form a seal with the dam and avoid leakage.  Seemed like an OK plan to me.  So I popped the pellets in and went to work melting them with Heat Fun.  It took a lot longer than I thought to melt the pellets with directly-applied superheated air, but after several minutes of blasting away at the highest setting I had the seal I wanted.  You can see where this is headed, can't you?

I let the seal cool and then heated up the rest of the bag of EZ Water pellets (way more than enough for the beach job).  Once they were molten I poured them in.  And poured, and poured, and poured.  Something was definitely wrong--I was dumping way too much resin into the basin, and the level was hardly rising at all.  I could not detect any leaks (my seal was working great!), but I could not figure out where the molten resin was going.  Only after I had poured the entire pan (it should have taken less than a quarter of the pan) did I feel I had added enough additional water effect to the beach panel.  I went to work with Heat Fun smoothing out the surface bubbles, completely perplexed as to where all the molten resin had gone.

I let the resin cool and removed the containment dam and immediately saw the problem.  Heat Fun had melted away a huge slab of pink foam, leaving a thin shell of plaster in an area slightly larger than my hand.  No painting over that.  This had not been a problem on the harbor panel because we had lined the foam harbor walls with rock sheets cast from Merlin's Magic, creating a nice thermal barrier between Heat Fun and the foam.  The beach panel had no such barrier and I was staring at the cavernous result.  The EZ Water had flowed into the cavity and cooled directly onto the bare wood.  In essence I had made an underground grotto.  The ultra-thin plaster layer crumbled easily at the slightest touch.

It was bad.  I am confident that a 20mm plastic figure placed on the thin plaster would have easily fallen through.

I really only had one move at this point, two if you count 'rebuild the panel' as an option.  I got out a bag of pumice rocks and a tube of tacky glue and, very carefully and slowly, filled the accidental grotto as best I could.  Then, feeling smart about writing down the base plaster recipe, I masked the water effect in the area with tape, whipped up a fresh batch and frosted over the rock/glue filling.

It worked better than I thought it would.  Much better.  So, I had a huge scare, but it mended pretty well.  Still, I'll be using Heat Fun in tandem with thermal barriers from here out (that, or I'll be making my terrain boards out of rocks instead of foam from here out.)

It could have been much worse, as I had no idea I was obliterating the foam while I was melting pellets to seal the gaps in my containment dam.  Lucky I stopped when I did.

Surprisingly, I stopped taking pictures while I was freaking out about melting the foam, but here is the repair job (dark plaster is still wet.)  I put another layer on the adjoining harbor panel to tie the two spots together. 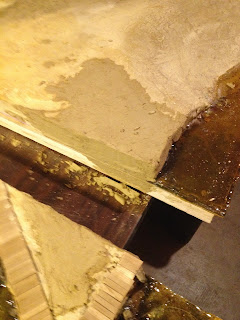 Once  the plaster dried, you could hardly tell that anything was ever amiss.  The wet sand effect in the picture below is a coat of acrylic gloss. 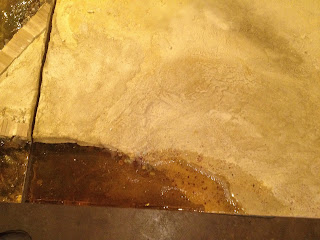 I'd rather be lucky than good.
Posted by Unknown at 6:28 AM